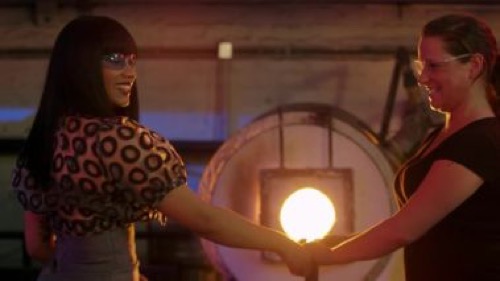 Tonight on VH1 their series Love & Hip Hop continues with an all new Monday January 25, season 6 episode 7 “Ups & Downs” and we have your weekly recap below. On tonight’s episode, Remy Ma tries to reconcile with her family; Peter Gunz and Amina Buddafly get their marriage back on track.

On the last episode, Self was tempted despite his efforts to win back Yorma; Peter and Amina tried to move forward as a couple; and Tara made a shocking admission. Later, Remy Ma helps Rah Ali with a fashion show, but the event ended in a quarrel. Did you watch the last episode? If you missed it, we have a full and detailed recap right here for you.

On tonight’s episode as per the VH1 synopsis, “Remy tries to reconcile with her family; Peter and Amina get their marriage back on track, but Tara has news for Peter; Moe focuses on her solo career.”

This week on Love and Hip Rashida meets up with her stylist Rose and Tahlia to tell them what happened at her fashion show. Rose tells Rah and Tahlia that she is dating DJ Self.

Remy is still working on her dream wedding despite Rashida not being there to help her plan it. She and Papoose are going to a cake tasting. Remy is worried about the guest list because she is stinging from the fact that her friends and family did not step up and help her and support her while she was in prison. Papoose wants to help Remy fix the bonds that were broken between Remy and the families while she was in prison.

Yandy has Moe in the studio and she plays the same track she played for Bianca in order to create friendly competition. Yandy decides to have Moe perform at DJ Self’s Gwinnin Fest. She is pitting her up against Lil B to promote friendly competition and tells her to come with fresh lyrics.

Lexxy calls Moe to talk after the fashion show because she was feeling that Rasheeda did not have her back. Moe let her know that she was not happy with the way things are going with Rah. She tells her that MariahLynne was performing at the fashion show. Moe informs Lexxy that she has signed with Yandy and that she has booked her a spot at DJ Self’s event. Lexxy wanted to perform with Moe one last time, but Moe was not open to it.

Cardi B, Mariah Lynne and Bianca met up to talk. Mariah tells them about her run in with Lexxy and Mariah tells them that she is not worried about Moe or Lexxy. The three of them dish about their issues with Moe and Lexxy and Bianca thanks Cardi for inviting her to the event and keeping her on track with their etiquette classes. Bianca then invites Cardi and Mariah to the studio to hear her work on her new songs. Cardi says she’d be there as long as it wasn’t on the weekend and the three women part ways.

Rich meets up with Self and Papoose to shoot pool and talk. Self tells them about the incident between him and Rose. Rich tells Self to keep his hands off the other women. Self decides to keep on the straight and narrow. Papoose talks about Remy’s feelings about the family not being there for her while she was locked up and Rich tells him to get everyone together and try to work it out.

Lexxy gets in the studio with Rah and French Montana to listen to her record. Lexxy is nervous when she is told that she is to perform on the spot for French Montana, but they like it and when Rah asks if they can work with her he says yes. Lexxy is very excited.

Peter goes to Tara’s apartment and Tara plans to tell Peter about her pregnancy. Peter is shocked when he hears the news. Peter tells Tara that Amina has recently had an abortion and Tara tells Peter to get his stuff together. She tells him that she is over all of his foolishness and all of the messiness that goes on in his house with Amina. Peter says that “maybe he is what everyone says he is.” and tells Tara that he will fix it before leaving.

Remy and Papoose go to visit his mother Irene. Remy feels as though his mother didn’t like her because she was in jail. Irene tells Remy that she took the letter in the wrong way and that she was worried about her son. Remy explains that she didn’t get that feeling from the letter and after talking to each other they apologized to each other and were able to come together. Remy admits that it is hard to talk to her own mother and Irene tells her that she has to let it go.

Moe is in the studio working on the track that Yandy gave her. Yandy comes in and is very impressed by what she hears. While they are in the studio Lil B comes in with Cardi and hears Moe playing what she assumed was her track.