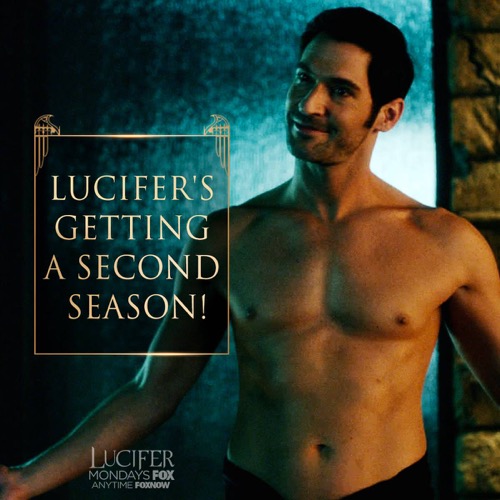 Tonight on FOX Lucifer airs with an all new Monday, April 25, season 1 finale called, “Take Me Back to Hell,” and we have your weekly recap below. On tonight’s episode in the Season 1 finale, Lucifer (Tom Ellis) is framed for murder, so he teams with Chloe (Lauren German) to clear his name and find the real killer.

On the last episode, when philanthropist Tim Dunlear was found dead, Lucifer explored his good side by becoming a benefactor for Tim’s glitzy Los Angeles charity. Did you watch the last season’s finale? If you missed it, we have a full and detailed recap right here for you.

On tonight’s episode as per the FOX synopsis, “when Lucifer is framed for murder, he and Chloe must work together to clear his name and prove the identity of the true killer.”

Don’t forget to join us for our live recap tonight at 9:00 pm when Lucifer airs on Fox.

Detective Malcolm Graham somehow managed to frame Lucifer for murder on tonight’s all new episode of “Lucifer” and it seems the plan was working right up until Dan finally decided to come clean with Chloe.

Dan has known that Malcolm was dirty since Malcolm’s shooting. However, he chose to remain silent in order to protect himself and not to disappoint Chloe. So he would have remained quiet about everything, including the part where Malcolm had actually tried to frame him as well, if Chloe hadn’t told him that she believed Lucifer was innocent of the late pastor’s murder. And that she feared someone had framed him.

And so that was the moment Dan felt it was finally time to Chloe everything. Yet, he couldn’t help her find Lucifer and she didn’t necessarily want his help with that. So she put him in charge of finding Malcolm while she went to Maze of all people for help. Which is something she wouldn’t have done under any other circumstances.

But unfortunately they both needed each other’s help in finding Lucifer. Lucifer had literally disappeared as the cops were shooting at him. So a lot of people have taken that to mean that he must be guilty and that’s why he ran. Only he didn’t technically run away, he was just taken to safety by his brother. Who he realized he didn’t want to kill Lucifer anymore.

Only Lucifer as it turns out had been ready to die when he initially egged the police to shoot him. So it was almost poetic that Lucifer was ready to return to hell just as Amenadiel no longer wanted to force his hand. Though teaming up with his said brother to remove the bigger threat – i.e. Malcolm – wasn’t easy. They had both felt responsible for what Malcolm has done and the lives that have been lost since, but they couldn’t help scoring points in an argument against each other.

So even though Lucifer was being hunted by the police, he and his brother managed to make time for a short therapy session. The two had stopped by Dr. Linda’s office and she had caught them arguing though she thought that they had been doing so because Amenadiel was trying to steal her patient. And therefore she hadn’t been in the mood when the two fallen angels came clean yet she truly did try to help the two deeply disturbed brothers.

She told Amenadiel that he had crossed an ethical boundary and she was in the middle of telling Lucifer off as well when he suddenly remembered something. The doctor had reminded him that he had come to LA for a fresh start and part of that fresh start had been what he bought off a great forger who helped give him his new identity. So Lucifer figured that Malcolm would also go to that same guy (who was known as being the best in LA) if he was making a run for it.

And Malcolm did want to flee town, but he needed a few things. He needed a new identity which he played heavily for and he also needed money. However, Lucifer and his brother showed up just as he was getting his hands on all the case he would need. So Malcolm stabbed Amenadiel with one of Maze’s knives and he fled again while Lucifer attended to his brother.

Amenadiel had tried to tell Lucifer that he should go after Malcolm and not worry about him yet Lucifer refused to leave his brother alone until Maze showed up. And took over treating Amenadiel. However, Lucifer didn’t have to follow Malcolm because Chloe had found him first and she managed to take Malcolm’s money from him. So it’s not like Malcolm could leave town without it.

He couldn’t though he could on the other hand threaten Trixie’s life. So he used Trixie to get Chloe to bring him the money she had taken and fortunately Lucifer caught on when he noticed something was off with Chloe. So it was a good thing that Lucifer followed Chloe to the meeting that Malcolm set up because not long after Chloe had ensured her daughter would be safe – Lucifer decided to take the bullet that was meant for Chloe. And naturally he went back to hell because Chloe had been nearby.

Though he hadn’t stayed there. Lucifer had apparently made a deal that would protect Chloe in exchange for being a better son to his father. So God chose to give Lucifer a second chance and he allowed Lucifer to return to earth. Where helped Chloe corner Malcolm and finally put that guy down. And he will thankfully stay down in hell because he lost out on using Lucifer’s coin, but and in spite of his generosity, God only did helped Lucifer because he wanted something else from him.

For while he may have considered the fact that Lucifer was ready to be obedient, what he really wanted from his erstwhile son was for Lucifer to return an escaped soul back to hell. Although this soul and the favor was special. The soul that Lucifer was supposed to find was his mother which for some reason truly frightened both Lucifer and Amenadiel!

But not everyone walked away unscathed from the whole Malcolm ordeal. Amenadiel had needed time and a feather from Lucifer’s old wings to heal and Dan had to come clean to the LAPD. He had known that Malcolm was a dirty cop and he sat on the truth even as Malcolm began to act erratic. And went on a killing spree.

So Dan’s career and possibly his life outside of a jail cell are over though at least Lucifer and Chloe still have each other. And that should come in handy for what’s ahead.