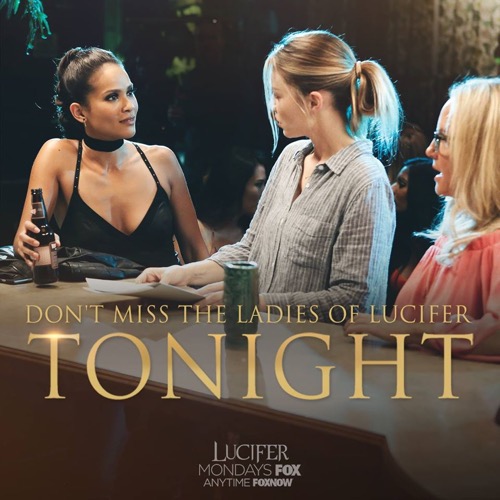 Tonight on FOX their drama Lucifer airs with an all new Monday, October 17, season 2 episode 4 called, “Lady Parts,” and we have your weekly Lucifer recap below. On tonight’s Lucifer episode  Maze  (Lesley-Ann Brandt) convincing Chloe (Lauren German) to join her for drinks, which the detective believes to be an act of friendship, is actually a bet between Maze and Lucifer. (Tom Ellis)

Did you watch the last Lucifer episode where Lucifer (Tom Ellis) and Chloe (Lauren German) investigate a gruesome murder after a video of the crime surfaces on social media?  If you missed it we have a full and detailed Lucifer recap, right here!

On the last Lucifer episode as per the FOX synopsis, “After the bodies of two young L.A. transplants are found poisoned, Chloe and Lucifer hunt for the killer. Upon Maze convincing Chloe to go out for drinks, which the detective perceives as an act of friendship, but is actually part of a bet between Maze and Lucifer, the two make a shocking decision

Linda had apparently noticed that Lucifer was more distracted than usual on during their therapy sessions. So the therapist had decided to ask Lucifer about that on tonight’s all new episode because she had been concerned about him. Linda had said that distraction could sometimes be a way for people to bury their emotions and so she had wanted to know what Lucifer was trying to avoid thinking about in case it was harmful to him. However, Lucifer hadn’t known that he was using distraction as a tool so it was until Linda pointed that out that he realized that distraction was the only way to forget about Dad.

Lucifer as some may recall, had made a deal with God in exchange for Chloe being safe. So part of that deal greatly relied on the fact that Lucifer had promised his father that he would return his mother to hell. But unfortunately, Lucifer just couldn’t do the job after he had talked with his mother so both he and Amenadiel were worried about what would God do next now that the deal had broken. Would God tried to hurt Chloe seeing as she had been part of the original deal or would God do something worse? So that’s what was what was bothering Lucifer and he was simply doing his best to forget about all of those possibilities by keeping busy.

Unfortunately, Lucifer kept busy by annoying Chloe. Chloe and Lucifer had gotten called out to a job when a Jane Doe had been found in the forest. So Chloe would have preferred it if Lucifer hadn’t always been such a goofball because she felt he was making light of the situation. A young woman had been killed and the police didn’t know why she was out in the forest. They had pondered if she had been dumped out there, but an Uber driver had thankfully cleared up some misconceptions and he had also give their Jane Doe a name. Jane Doe was Daria. She was a waitress at this latest hot restaurant and a toxicology report later revealed that she had also been poisoned.

So suspicion naturally fell on the boyfriend. The boyfriend had owned the restaurant that Daria was working at and he had also been married. Yet, the boyfriend surprisingly had an alibi. He had been fighting with his wife all night because she had found out that he was sleeping with one of the waitresses though their fight had about someone other than Daria. So the boyfriend was a bit of skank and that skank actually knew a few things about Daria. He said that Daria lived with a different waitress named Naomi and that the two had been close. And so Lucifer and Chloe had gone to see Naomi.

Only Naomi wasn’t able talk to anyone. Naomi had also been murdered yet she had made it back to the apartment from where she and Daria had gone. Both women had a snap on their arm that showed they had been put partying and no one had known where that stamp was from. Lucifer had tried taking a guess and then he had gotten distracted by his phone. So Chloe was stuck on the stamp and she didn’t know how to figure it out until Maze had surprisingly invited her out on a girls’ night. Maze, Linda. Ella, and Chloe had all gone out clubbing and they had gotten really drunk when Chloe had noticed that some guy at the bar had the same stamp on his arm.

However, Chloe had some problems with asking about that stamp. The guy that she had apparently wanted to question had a jealous girlfriend that thought Chloe was hitting on him. So a simple question and answer had quickly turned into a bar fight before anyone knew about it though fortunately, Chloe having a badge did eventually help the girls out of a pickle. No one had wanted to beat up a cop so Chloe did get her chance to ask about the stamp and it turns out that it was a secret symbol for pop-up sex party. It seems that Daria and Naomi had gone to these parties to hook up with wealthy and powerful men so Chloe had thought the party could be why they were murdered.

Chloe, however, couldn’t go to the party to suss out any suspects for herself. She had found out that only men were invited to those parties so she had to ask Dan and Lucifer to go for her. But she had needed to make sure that Dan couldn’t go alone. Dan had seemingly looked too much like a cop when he was by himself so Lucifer was supposed to be his backup as well as his cover. Lucifer was a hard-partying playboy so there shouldn’t have been any problems with invited him yet Lucifer had ended up inviting his brother Amenadiel along. As Lucifer later explained to Dan, his brother was going through a rough patch lately and had needed some cheering up.

So Dan had been fine with Amenadiel right up until Amenadiel drew a lot of attention to himself. The archangel had been losing his wings and so that had made him doubt himself as well as blame Lucifer for what happened to him. Amenadiel had thought that God was punishing him because their mother was still on earth so he was scared. Yet, a lot drinks and dancing with some very pretty girls had helped Amenadiel to get through this trying time and he had also almost blown Dan’s cover in the process. Dan had needed to keep low key in order to investigate the people around them, but a bartender drew his attention when the guy made the same drinks that killed their victims.

The ladies had been killed by a certain poison in their drink and it had been served to them as a smoking martini. Though when Dan went to ask the bartender whether he saw the girls, the guy had tried to split. So Dan had revealed that he was a cop and he had gotten some answers like who the girls had been with then later who had brought the girls to the party. Naomi and Daria had apparently been brought to the party by a woman that had given them their drinks so the detectives had hunted for a photo because blonde woman wasn’t much of a description. And when they saw it, they realized that the girls had been killed by their supposed friend.

Both Naomi and Daria had come out to LA to make it big and their “good” friend from college. Lily had showed them where to hang out and got to the gym. However, she had thought that she should get something for being such a good friend so she had put what she thought was roofies in the girls’ drinks as a way to curry favor at the sex parties, but both girls died and Lily had then tried to cover up what she did. So Lily was going to jail though she had tried to pull a knife on Chloe as a way to get away and Chloe had beaten the hell out of her.

Chloe had found out that Maze hung out with her because of a bet so she had been pretty big on hurting women that only to pretend to befriend other women. But as it turns out Maze hadn’t been pretending all that much. She later told Chloe that she didn’t want to kill her anymore and then she asked if they were still good to share an apartment. Chloe had apparently agreed to that when she was drunk so Maze wanted to hold her to that promise. So Chloe and Maze were going to be living together even if it killed Chloe. And Chloe seemed to be adapting well to the fact that she and Dan were getting a divorce.

Yet, Lucifer was worried about Chloe and eventually distraction wasn’t enough to get his mind off of what could happen to her.