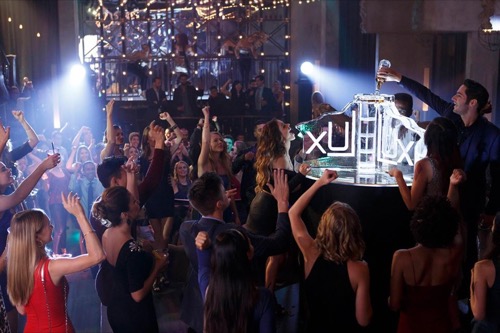 Tonight on FOX their drama Lucifer airs with an all new Monday, November 20, season 2 episode 9 called, “Homewrecker,” and we have your weekly Lucifer recap below. On tonight’s Lucifer episode as per the FOX synopsis, “Lucifer (Tom Ellis) and Chloe (Lauren German) investigate the murder of the owner of the building in which Lux is located, while Maze (Lesley-Ann Brandt) and Amenadiel (DB Woodside) shadow Charlotte, (Tricia Helfer) who launches a plan to upset Lucifer to the point he’ll want to leave Earth.”

Lucifer really didn’t want to leave earth or turn his back on humanity. But he was apparently the only one of his family members that didn’t want to return to Heaven where they all allegedly belonged. So Lucifer tried showing Amenadiel around Los Angeles as a way to convince his brother that they could all make their homes on earth however his brother didn’t want to hear it and Linda couldn’t help him to get his brother to see his side. She said that his brother wanting to return to Heaven was probably about the fact that he was a fallen angel and then the therapist that they should be talking about him. Linda had wanted to know why earth had felt like home to Lucifer.

However, Lucifer didn’t know how to answer to her because he didn’t know how to explain why earth truly felt like home. He said that Hell was where he was sent as punishment and Heaven was where he no longer belonged. So Linda had questioned if he liked earth because he was running away from something else yet he later thought about what Linda said at a crime scene and of course Chloe had to tell him he was once again acting inappropriate as he sat down in their latest victim’s chair at a crime scene. And so Lucifer had to snap out of whatever he was feeling and concentrate on the investigation.

The latest victim had been Dean Cooper and his death eventually became a personal matter for Lucifer because it turns out the victim had been his landlord. Yet, the victim’s son Eric was an outright jerk and he was already doing his best to liquidate his father’s assets within an hour of said father passing away. So Lucifer had quickly found out that Eric wanted to evict him out of the building and so he told Chloe that she needed to look into Eric Cooper. Lucifer had felt that it was too suspicious that Eric had wanted to do his best that fast after his father died and that the fact that he also hated Eric played a part in wanting to see the other man in jail.

So Chloe had tried to tell Lucifer that they were going to need more than a feeling to suspect Eric, but Ella ended up finding the evidence they needed. Ella had found Eric’s fingerprints on a smashed glass at the crime scene and that had been more than enough to talk to Eric about his lack of grieving. Though Eric really wasn’t the bad guy that they all thought. Eric had tried to kill himself not long after selling off his father’s assets and it was by sheer luck that he had survived that. And so Eric had been in just the right vulnerable state that he was willing to tell Chloe as well as Lucifer the full truth afterwards.

Eric had told them that the company had been deep in debt and that he thought selling Luxe would be able to save them from financial ruin. But unfortunately, the sale wasn’t going to be enough to save the company. Eric had hated his father however he appeared to have a very good reason to. His father had made off the books payments for years and had basically given Lucifer prime reality for peanuts. So Eric’s dad wasn’t great with business and it was revealed that he had been the true jerk because he had agreed to sale of the whole strip and then withheld his signature at the last second as a way to needle a businesswoman.

The businesswoman had been Eleanor Bloom and sadly she had been out of the country at the time of death. So Bloom couldn’t’ possibly have killed the man that had left her hanging for years yet she was glad that the deal finally went through and she also couldn’t wait to bulldoze Lucifer’s home. Bloom had said that she was going to put up a strip mall in the area and Lucifer’s jedi mind trick got her to admit that she truly wanted to destroy everything that belonged to Dean. However, that was all Lucifer could get Bloom to admit and so she was written off as a suspect because neither he nor Chloe could find anything to pin on her.

Yet, Bloom was still kicking Lucifer out of his home so he decided to hold a sit-in/party. Lucifer had opened the club and had invited as much people as he could in because he knew the building couldn’t be bulldozed with people inside. So the cops had eventually been called seeing as Lucifer was resisting an eviction and Chloe helped him out. Chloe had told the police that arrived on the scene that she would handle things and then she just the party continue after the officers left. Chloe had told Lucifer that she knew Luxe was his home and that she wanted to support him as well as what she knew was incredible important.

The party had to come to an end though and by the next morning it did. Though Lucifer did come to see in time that he could still make his home on earth with or without Luxe. Lucifer had seen Eric and his fiancée both confess that they each killed Dean because Dean had created fake photos of Kristie cheating on Eric when in fact only one of them could have actually committed the crime. So they had both claimed it was them and not the person they loved to get the other off and if that couldn’t work then they didn’t care if they both went to prison because that still meant they loved each other. And it was being a witness to that had convinced Lucifer that he was never going to lose his home.

So Lucifer later told Chloe that he was going to give up fighting however she hadn’t wanted him to lose the place so she had done something about it. Chloe had spoken to someone on the City Council to protect Luxe from ever being bulldozed and so Lucifer was going to get to keep the place. But he hadn’t understood why Chloe had done so much for him so he had asked Linda to helped put everything perspective. Linda had reminded Lucifer what he had seen with Eric and his fiancée Kristie and they were each other’s home so she made Lucifer face his feelings. And that he did love Chloe.

Chloe though was in danger. Lucifer’s mother had found out about his feelings for Chloe so she had asked a bomber client to plant a device under Chloe’s car and hand her finger on the button during the last few minutes of tonight’s episode.