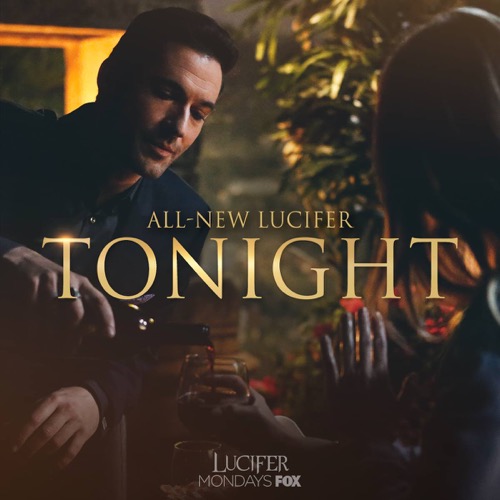 Tonight on FOX their drama Lucifer airs with an all new Monday, November 28, season 2 episode 10 called, “Quid Pro Ho,” and we have your weekly Lucifer recap below. On tonight’s Lucifer episode as per the FOX synopsis, “Charlotte (Tricia Helfer) tries to turn Chloe (Lauren German) against Lucifer (Tom Ellis) in an effort to get him to depart Earth; Amenadiel becomes Charlotte’s soldier, leaving Maze (Lesley-Ann Brandt) to question his loyalty.”

Charlotte had had her hands on the trigger and her plan all along was to to kill Chloe. However, Amenadiel had stopped her. Amenadiel had showed up at just the right time and had asked his mother to think clearly about what she was going to do because they both knew that they couldn’t exactly force Lucifer to go with them if she killed Chloe.

So Amendaiel had said that if they truly wanted Lucifer to leave earth with them that it had been to Lucifer’s decision. Lucifer had to decide when and if he was prepared to leave Chloe behind.

But Charlotte didn’t like listening to reason. She felt that that Chloe was threat and she was going to detonate the bomb that she had planted under Chloe’s car however Amenadiel had another trick up his sleeve. He had used a delaying tactic to ensure that Chloe got away safe and he had hoped the additional time would give his mother some much needed clarity.

So Amenadiel had chosen to place his faith in his mother and unfortunately she had later let down both of her sons because Charlotte didn’t know how to give up on proving that Chloe was unworthy.

So later Lucifer and Amenadiel had found out that their mother had taken on a new client. Charlotte had apparently decided to represent former Deputy Warden Perry Smith. Smith was the man that had killed Chloe’s father John Decker and had paid off another man to take the fall, but Chloe was eventually able to reveal the truth and she had done so with Lucifer’s help.

Lucifer had after all killed his own brother to protect Chloe. So Charlotte had told Lucifer in the end that she was representing Smith because she didn’t think Chloe would ever sacrifice as much as Lucifer did for him yet Lucifer had been prepared to prove his mother wrong.

Lucifer had wanted to make sure that Smith did go to jail for what he did and so he stepped up when the prosecution’s former witness had died. Though luckily Lucifer had remembered every detail of his conversation with Boris and he had been able to fill in the whole court room about what really happened.

Beginning with when he and Dan met up with Boris as potential clients and ending with the second that Boris agreed to tell them about Smith. So Lucifer had presented the prosecution with the testimony’s just as good as if Boris had been there himself though his mother would try and batter him up on the stand.

However, Charlotte didn’t do that. Charlotte had simply been asked whether she questioned the witness and she had turned down that opportunity. Almost as if she didn’t see Lucifer’s testimony as a threat.

But Charlotte had known something that Lucifer didn’t. Charlotte had known that the official police report said Dan was the first on the scene however he had simply lied on that report because he had wanted to cover for Chloe. Chloe had actually been the first one there because she had been stalking Joe Fields and so they both cover up the truth. And the only person that didn’t known what happened was a secret had been Lucifer. Lucifer and Chloe had talked about the day she found Joe Fields and he didn’t think it mattered if she did.

So Lucifer had been caught off guard when Charlotte later called him back to the stand and he hadn’t thought he was falling into a trap when he stated that Chloe had been first on the scene, but he played right into Charlotte’s hands. Charlotte had brought up such information in court because she had wanted to create a different narrative and had used Lucifer to do it. Charlotte had wanted a stepping stone to ask the jury what if Chloe had killed Joe Fields and had simply framed Smith in order to cover up what she did?

Charlotte’s whole narrative was about Chloe being a dirty cop with a grudge. So she used that to her advantage and had severely hurt Lucifer’s relationship in the meantime with the detective. Chloe had blamed Lucifer for running her father’s trial and worse she had also accused him of something he didn’t do. Chloe had said that Charlotte must have gotten her information from somewhere and that it must have been him that told Charlotte everything seeing as he was such good friends with the other woman. Yet, Lucifer hadn’t been the one to leak information to the defense.

Lucifer would never have done that to Chloe and he had felt betrayed by Chloe for ever thinking that he would. Though he still contacted Dan and the two did try to follow the evidence as a way to prove Smith was guilty. So Lucifer had been caught off guard for the second time when Dan revealed he had leaked the information to Charlotte after they slept together. Lucifer hadn’t apparently liked hearing that someone slept with his mother much less that it was Dan who sometimes calls Detective Douche.

However, Lucifer and Dan were never able to find something concrete though that didn’t matter to Chloe anymore. Chloe had been offered an choice where she threw Lucifer under a bus and her father’s killer would go to jail. Only Chloe didn’t want to hurt Lucifer like that and she later chose to stand up for him. She said that Lucifer was a great partner and even greater friend. And so her testimony repaired a lot of the damage that Charlotte caused and the two eventually made up because they were good friends.

So Charlotte’s plan didn’t work and that later turned out to be a good thing. Charlotte and Amenadiel had talked after the trial and Amenadiel had revealed a great secret to his mother. He said that thirty-five years ago his father had asked him to help a couple conceive a child and that he now realized that child was Chloe. But while Amenadiel didn’t know what that meant, Charlotte had said that Chloe was the key to returning home.