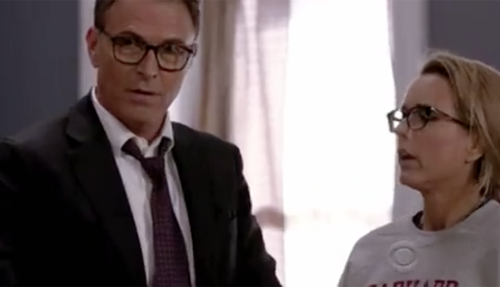 Tonight on CBS Madam Secretary airs with an all new Sunday, November 6, 2016, season 3 episode 5 called, “The French Revolution” and we have your Madam Secretary recap below. On tonight’s Madam Secretary episode, the McCords get an important lead in their family’s stalking case.

Did you watch last week’s episode where after a bombing at a political rally in Angola, Elizabeth had to find a way to respond to a “dissent memo” from the Bureau of African Affairs when they criticize the Dalton Administration’s lack of attention to the upcoming Angolan election? If you missed it, we have a full and detailed recap right here for you.

On tonight’s Madam Secretary Season 3 episode 5, “When an imminent U.S.-France state dinner is jeopardized after a CIA operative is captured by French intelligence, Elizabeth must negotiate the operative’s release while keeping the event on track. Also, Russell tries to woo back big donors to Dalton’s campaign.”

Tonight’s episode of Madam Secretary kicks off where we left off last week – Henry and Jose are freaking out because someone just abducted their asset Cecile. They manage to get license plates off the car that took Cecile, henry is certain that HS is responsible.

At the McCord house, Elizabeth is cooking breakfast for her skeptical kids. They want to know where their dad is – she reassures them that he will be home soon, there is just a lot going off at work. Allison’s upset over the stalker, Elizabeth offers to let her skip school and go to work with her, but Allison turns her down.

Elizabeth heads to work – her team is waiting for her. They have a big week, the French prime minister is holding an event and Liz needs to woo the French at the state dinner. Russell interrupts, he wants an update on the big event, he tells them that it is vital that the dinner goes off without a hitch and Katy Perry is seated next to French President Perrin.

Nadine argues with Russell that he doesn’t care about the dinner, he just cares about winning over the rich billionaires that will be at the dinner party as possible campaign donors for Dalton. Meanwhile, Russell is still trying to win back Burton and his pals, he meets up with them for dinner later.

Henry gets interesting news. It turns out that his asset Cecile wasn’t grabbed by the terrorists, the French picked her up to question her and had no idea that she was working for the Americans.

Later that night, Captain Shaw stops by the Mccord house. She has news about the stalker to share with Henry and Elizabeth. Apparently, the hacker is using a monetary system called Bucksend. Shaw says that whoever is hacking them, is working for someone – and they are working on getting more information.

Elizabeth heads in to work early the next day, the only one at the office is Blake. She’s shocked when she enters her office and finds a message from the hacker. Someone spray painted the word “Quit” on her wall and drew X’s on the photos of her family. Blake rushes to call the FBI to investigate.

Dalton calls Elizabeth and Henry to his office – he got news from the French, they are refusing to release Cecile, they are upset that the US was working in Algeria without letting the French know. Elizabeth meets with the French prime minister at a Yorktown Memorial to try and smooth things over. The French are driving a hard bargain, they want their NATO payments dropped 5%. Elizabeth strongarms the French in to releasing Cecile by threatening to arrest all of the French spies on American soil.

Elizabeth heads back to the office, and Russell is waiting for her. He freaks out on her about making things worse with the French. Now they are threatening not to come to the state dinner, which will ruin Dalton’s campaign.

The FBI calls a meeting with Elizabeth and Henry. They investigated the disaster in her office and found out that the card that the stalker used to get in to the office belonged to their janitor Diego. They even have pictures of him on security cameras with a can of spray paint. Elizabeth isn’t buying it, she has known Diego for years and don’t believe that he could have done it. The FBI is busy tracking Diego down – apparently, he got on a flight and is flying home to El Salvador.

Back at Elizabeth’s office – her team is working hard trying to figure out a way to smooth things over. Jay is thrilled because he got the FDA to drop their ban on French cheese. Nadine scoffs that dropping a cheese ban isn’t going to stop France from leaving NATO.

Cecile calls Jose and Henry and fills them in on her meeting with HS after she is released from the French. She has a good tip for them – she met with someone named Bouseed, who is being groomed to be the next leader of HS. The only thing is, they are going to have to smooth things over with the French, because they have intel on Bouseed.

There’s a break in the stalker case. The FBI tracks down Diego, and luckily he is waiting for a payment for spray painting Liz’s office on Bucksend. Captain Shaw is on hand to track the payment as soon as the stalker sends it to Diego.

The next day Henry and Jose meet with Dalton and the French and they coordinate an attack on Bouseed in Algeria. The mission is a success and they are able to take in all of the artifacts that HS was planning on selling plus a ton of new intel on the terrorists.

Blake rushes in with news – Diego’s tip paid off, they are about to arrest the stalker, who is apparently named Ron Jameway. The McCords watch on live feeds as the man is arrested and brought in to custody – there are photos of their kids all over the apartment.

Since their stalker drama is over, Elizabeth and Henry head to the state dinner. Elizabeth runs in to Burton in the lobby. She tells him that she was considering stepping down from running as Vice President because she had a stalker – Ron Janeway, and they know that he was working for Burton and trying to get Elizabeth to quit. Burton scoffs that he had nothing to do with the stalker, and if he really wanted her fired, he would have told Dalton to fire her and the President can’t win the election without Dalton.

Dalton interrupts their meeting – Burton tells the President that Elizabeth made some crazy accusations, and he is withdrawing his support. Dalton makes it clear that if he is choosing sides, it will be Elizabeth’s and he no longer has any interest in doing business with Burton.