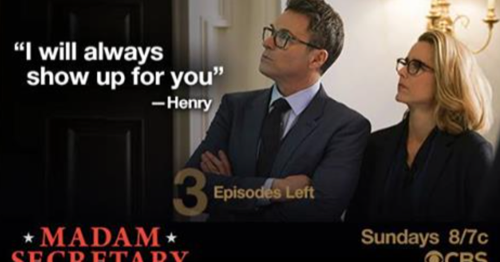 Tonight on CBS Madam Secretary airs with an all new Sunday April 24, season 2 episode 21 called, “Connection Lost” and we have your weekly recap below. On tonight’s episode, President Dalton (Keith Carradine) sends the “Murphy Station,” aka Henry, (Tim Daly) Jane (Jill Hennessy) and Jose, (Carlos Gomez) on a dangerous mission after receiving word that the world’s most wanted terrorist is hiding in Islamabad.

On the last episode, Elizabeth formally condemned the terrorist group Hizb-Al Shahid when she delivered her first speech at the United Nations General Assembly. Did you watch the last episode? If you missed it, we have a full and detailed recap right here for you.

On tonight’s episode as per the CBS synopsis, “President Dalton sends the “Murphy Station,” aka Henry, Jane and Jose, on a dangerous mission after receiving word that the world’s most wanted terrorist is hiding in Islamabad. This assignment comes as Elizabeth and Henry begin couples therapy with Dr. Kinsey Sherman.”

This is definitely one series that you don’t want to miss and neither do I. Don’t forget to stay tuned to Celeb Dirty Laundry where we will be blogging every episode of Madam Secretary’s second season. In the meantime, sound off in the comments below and let us know how you are enjoying this second season.

Elizabeth and Henry McCord were trying to find their way back to each other on tonight’s episode of “Madam Secretary”. Lately, they’ve been talking more about work and how Henry sees the late Dmitri’s face everytime he looks at his wife yet they’ve haven’t been just a couple for a while now. And that was something they both knew needed to change.

So when Elizabeth suggested they try couples’ therapy, Henry had put up some opposition but he later felt like maybe that’s what they needed. However, couples’ therapy itself couldn’t be taken lightly or with half-measure. The both of them had to listen to the therapist and at least try to infiltrate some of things that she had asked of them. So that’s how they later ended up trying to distance their work life from their home life. And what that meant was that they couldn’t take what happened at work with them home.

Which had been the case with Dimitri. Dimitri had been Henry’s intelligence asset in Russia and Elizabeth had been in on the decision when the U.S. government decided to trade Dimitri for peace with Russia. So Henry blamed her just as much as he blamed everyone else for Dimitri’s capture. And what most likely resulted in death both for Dimitri as well as his sister. Yet the therapist, who had only known part of the otherwise classified story, had told the couple that a little distance to what to take to work with them and what they leave at home could help them in the long run.

So the first test of their newfound policy was this issue in Pakistan. As Madam Secretary, Elizabeth and her team had to come up with new strategies in welcoming delegates from Pakistan and apparently someone had suggested a build-a-bear workshop as a way to counteract extremism. But while they were courting Pakistani interest and about to hand over two billion dollars in aid, word had come in that one of the world’s most dangerous terrorist was revealed to be allegedly hiding out in Pakistan. And so Elizabeth found herself at black-tie event celebrating new if not brighter relations with a country that was secretly harboring their enemies as her husband was discussing strategy about finding jihadist in hiding.

And so these issues they both had to face could have easily have crossed over into their personal life. Though both Elizabeth and Henry had tried to leave what had happened at work instead of bringing it back home. So she got dressed for her event and even had a discussion with a foreign minister about simply turning a known terrorist over to them yet her husband had been part of another discussion about what to do if her diplomacy failed and it did fail.

The delegates had promised that they could help and there did appear to be some search conducted. However, it was soon called off because someone higher up in government chose the terrorist over the new trade deal with the U.S. So that’s when all discussion had to stop and action had to take place. And unfortunately Henry had to be in on the action.

Jibral Disah and members of Hizb al-Shahid after all weren’t just anyone. The terrorist and his followers had previously entered the U.S. with a dirty bomb and they harmed countless civilians. So until he was found, the U.S. government decided to suspend all talks with Pakistan until their allies proved to be more helpful in their search for Disah. But, even as these actions were receiving endorsements from the president himself, such actions had a way of upsetting Matt. Which was surprising because Matt had always been something of a court jester before

Matt though had actually come up with new initiatives that he had hoped he could talk Elizabeth intro trying out as a way to help the people of Pakistan. So he had kind of taken it personally when he heard the U.S. was ending all of their conversations with Pakistan in the meantime. Yet, Nadine felt like there must have been something else that Matt wasn’t saying so she later asked him about it. And apparently the reason Pakistan had been important to Matt was because his mother was from there.

His mother had been born and raised in Pakistan, but she left everything behind including her family when she was sixteen. So Matt had wondered about the place his mother still calls home and he had wanted to be part of making the country she remembered great again. And, well, Nadine had to tell Matt that even if things got better with Pakistan – they were never going to be able to reinstall that place his mother remembered.

Too much had happened since!

And frankly it was just getting worse by the minute. Henry and his elite team had flown to Pakistan as part of a diplomacy mission when really they were carrying out a covert mission called Murphy Station. Murphy Station was Henry and his people overseeing their assets on the ground in Pakistan. Yet, it carried a great risk. First they had to fly directly into enemy territory and then they had to spy on a country while they were surrounded by said enemies.

So Elizabeth was worried about her husband as it was and the two had managed to break the one rule their therapist had told them to try out because they had gone home and they had talked about Murphy Station while they were at home before Henry ultimately flew to Pakistan. But everything went belly up after someone in the Pakistani government had found out what the U.S. were asking of them and literally tweeted to the entire country that Pakistan was being spied on. And that Prime Minister Khoosat was helping the Americans do it.

Apparently national pride had caused hundreds if not thousands of people to rise up against the prime minster as well as American influence. So Henry and his people were supposed to be pulled from the country when they chose to stay behind as everyone else fled. And now Henry is in danger because he didn’t take the chopper Elizabeth had sent to the embassy!