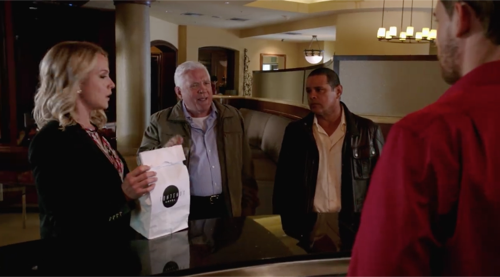 TNT Major Crimes airs tonight with an all-new Monday, September 19, 2016, and we have your Major Crimes Season 5 Episode 13 recap below!  On tonight’s Major Crimes season 5 finale episode the third in a 3-part arc, Major Crimes inches closer to the enigmatic mastermind in the Dwight Darnell murders.

Did you watch the last episode where the Major Crimes unit continues to investigate the conspiracy behind Dwight Darnell’s murders and his links to the Zyklon-Brotherhood? If you missed it we have a full and detailed Major Crimes recap, right here for you.

On tonight’s episode of Major Crimes as per the TNT synopsis, “Major Crimes hurtles forward towards the mysterious and elusive mastermind in the Dwight Darnell murders while Buzz (Phillip P. Keene) and Rusty’s (Graham Patrick Martin) investigation into the murder of Buzz’s father comes to an unexpected end.”

Captain Raydor and her team took a second look at what little they had on the court shooting and they were able to draw some different conclusions on tonight’s episode of “Major Crimes”. Apparently, they believed there were some loose ends that they hadn’t noticed before so that second look made them realize that they hadn’t in investigated why Dwight Darnell shot his own attorney. His attorney Marco Calderon had technically been court appointed and therefore had no say in representing Darnell. But Dwight had made his disdained for his Latino lawyer quite clear for everyone that saw the two together.

So initially Major Crimes had thought Dwightl had killed his lawyer for simply be Hispanic, but the team reviewed the tapes from the shooting and it had seemed like Calderon had known that Darnell’s gun was loaded. Though he hadn’t known that Dwight would target him next. The tapes showed that Calderon had calmly remained seated when Dwight first went on his rampage and he hadn’t bothered to raise his head or even try to look for cover until Dwight suddenly turned the gun on him. Which appeared to shock him as if that hadn’t been part of the plan and like Deputy Simms he had been caught unaware.

Calderon though wouldn’t be the first person to betray his own race by joining up with the Aryans so the police had to investigate him and see how he had come to represent Dwight. However, they had run into several problems while looking into Calderon. They had found out that Calderon had a connection to Jordan Graff and to a company that both Jordan and Dwight’s mother were attached to. So Wildred Darnell’s story about not wanting her son to be part of the Aryan Brotherhood and in fact hating those people no longer held weight. She was as deep in what Jordan was doing as pretty much everyone else in his inner circle.

Yet, getting people that close to Jordan to speak up much less speak to the cops wasn’t easy. So they had to give up on their undercover detective and blow his cover just to get information. Detective Wes Nolan had revealed himself as a cop and that had gotten a member of the Zyklon Brotherhood so scared that he was willing to tell the cops everything they wanted to know. Like how he hadn’t known that they were going to kill Deputy Simms’s girlfriend and that he had thought the shooting was foolish. And that got the detectives to thinking about. that shooting.

The shooting had been foolish and all it did was bring about further scrutiny. So thinking about the shooting from that angle had made the captain question who gave Dwight the order to open fire. She had had her team look into Dwight’s meetings with Calderon and they had seen the moment Calderon had given Dwight his marching orders. But what had stood out to them was the part that Simms couldn’t sit on Dwight’s meetings with his lawyer so they had come up a scenario for what possibly happened.

The detectives believed that Calderon had told Dwight to shoot Simms along with everyone else and that Simms had told Dwight to shoot Calderon along with everyone else. So it seemed like someone wanted to erase everyone that could lead back to them. Though that doesn’t explain the shooting. The shooting wiped out everyone that could have helped the Z-Brotherhood on the inside so that had made some question if that was the point of the shooting to begin with. Like maybe someone wanted to destroy the Z-Brotherhood because it was getting in the way of their own plans.

So the detectives had brought Jordan in for questioning based on what their informant told them though the captain personally felt that he wasn’t responsible for what happened to Hai Sun. Raydor had said that Jordan wouldn’t destroy his own power base which was the Z-Brotherhood so she apparently believed him when he said he had a mysterious partner. Jordan had said that Simms was his contact to his partner in the trucking company and that he hasn’t heard from the mysterious other person since the courtroom disaster. However, Jordan had revealed that his partner what he to hold onto to that trucking company.

Jordan hadn’t said why he was supposed to hold onto it however his partner had convinced him that’s what he should do. So the police raided the trucking company to find out what was really going on and there they ran into Wildred Darnell. Wildred being the only piece linked to this mysterious partner and to Dwight their mass shooter. Yet, Wildred was still as stubborn as ever and she hadn’t wanted to reveal who Dwight’s father was. It seems that she had been trying to convince herself and the police that her ex couldn’t be involved with what happened to her son, but Raydor said she’d be the judge of that.

The police had had it tough with a public investigation and little arrests. So they needed a win just to combat everything else that’s been happening. Unfortunately, Sanchez had lost custody of his foster son Mark after the system was able to track down his biological grandparents and so Sanchez had to give up the little boy even though neither one of them wanted to say goodbye to each other. But if that wasn’t enough there was also what happened to Buzz. Buzz had found the man that killed his father and the victory had been hollow because Bill Jones was now married and had kids of his own. And so he had questioned whether or not he wanted to arrest Bill while Rusty on the other hand, had been proud of him for getting justice.

Though nothing ended up comparing to the moments after Wildred agreed to wear a wire. Wildred had been told that her lover and Dwight’s father had been the one that set everything in motion so she had agreed to wear a wire because she hadn’t wanted it to be true. So when Wildred walked into Martin Borja’s office, she hadn’t expected that Martin would confess everything to her. Like how he had wanted to get rid of the Z-Brotherhood to legitimize his business or that he had set Dwight up to die because he hadn’t wanted to be associated to the young man.

So finding out that she had been protecting and still in love with a man that had only used her and her son had been enough to send Wildred over the edge. Wildred had apparently known where Martin hid his gun so she had reached for it and had executed him before the police could break down the door. However, the new Chief of Police later said that they might be able to work out a deal for Wildred that meant she would eventually a parole date and safety while she served her time. And so there was a chance for Wildred after everything.

Yet, the stress from everything that had happened had ultimately gotten to Andy who suffered a heart attack on tonight’s season finale.