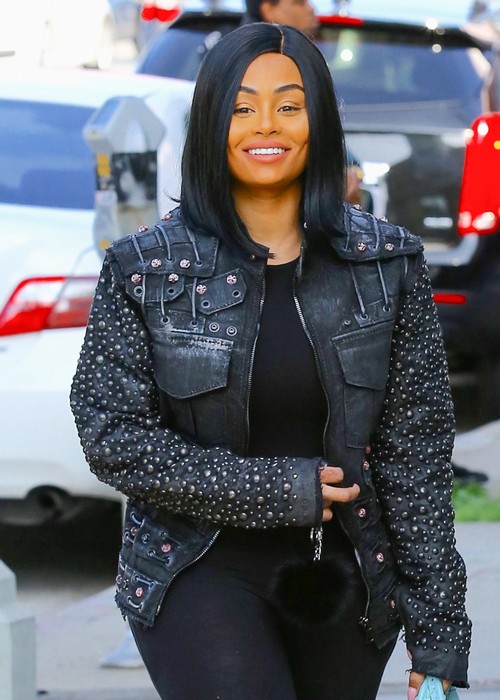 Blac Chyna’s new married name will be Angela Kardashian! As you can imagine the entire Kardashian family, especially Kim Kardashian and Kris Kenner are fuming and freaking out.

Angela White – Chyna’s legal name – and Rob Kardashian nearly broke Twitter when the couple announced their engagement. Rob put a ring on it – a very big 7-carat diamond that cost a reported $325,000.

Chyna’s rep confirmed to Us Weekly that the make-up artist will take Rob’s last name when the two are married. Kris Jenner and Kim Kardashian were already outraged when Rob and Chyna broke the engagement news to the world without telling the family first. Now Chyna is going to tack Kardashian onto her name?

TMZ sources say that Kim and Kris are “offended Rob never gave them a heads-up” but the family isn’t really taking this engagement seriously. Insiders divulged that Rob Kardashian told the family he proposed to ex-girlfriends Adrienne Bailon and Rita Ora too.

But you know that Kris Jenner and Kim Kardashian must be dying over this double whammy. Why not just embrace Blac Chyna with open arms and welcome the make-up artist into the family? If the Keeping Up with the Kardashian stars were smart that’s exactly what they would do.

Kim Kardashian and Kris Jenner have driven Kanye West completely crazy. Not that Kanye didn’t have problems before he married Kim. Kanye doesn’t sleep in the same bedroom as Kim anymore. Before Blac Chyna marries Rob she might want to take a closer look at that situation and becomes Angela Kardashian.

The Kardashians shouldn’t diss Chyna and dismiss this engagement. Kris and Kim, embrace it! Throw a huge Kardashian family dinner to welcome Chyna into the family. Invite Kylie’s boyfriend Tyga over to join in the celebration. That wouldn’t be uncomfortable at all!

Rob will never forgive Kim for humiliating him in a Rolling Stone interview. Kim told the world Rob was lazy, fat and sat around smoking weed, drinking beer and playing video games all day long. And Kim has continually blasted Rob on social media about everything and anything.

Marrying Chyna is Rob’s way of letting Kris and Kim know he’s sick of being controlled and sick of being the brunt of the family’s jokes and attacks. Rob Kardashian is going to marry Blac Chyna and make her Angela Kardashian and there is nothing Kim Kardashian or Kris Jenner can do about it.

The future Angela Kardashian aka Blac Chyna by FameFlynet