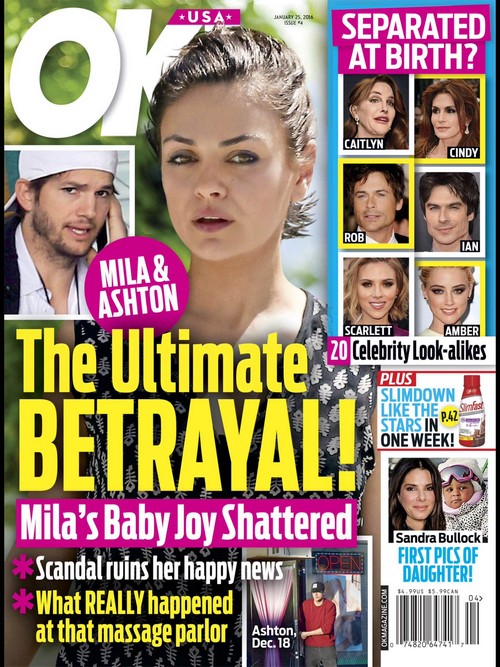 Does Mila Kunis have a heartbreaking decision to make? Forgive Ashton Kutcher or file for divorce? Is the marriage really over? Everyone has seen the photos of Ashton leaving a massage parlor in what has been called a “seedy strip mall” in North Hollywood.

Ashton made the unfortunate mistake of choosing a place with a bad reputation and allegedly offering to rub more than just a client’s back.

Stopping in for a massage at this place was probably a simple error in judgement. However, just about everyone jumped to the conclusion that something must have gone terribly wrong and Mila and Ashton’s marriage was coming to an end.

Does Mila really have anything to worry about? According to an OK! insider, Mila isn’t letting that stupid mistake destroy the couple’s marriage or lead them to divorce.

Sure, the actress might have been embarrassed and there could have been a lot of yelling and screaming going on in the Kunis-Kutcher house the day that picture was published.

An insider recently told OK! that Mila has accepted Ashton’s apology and assurances that he didn’t get anything more than a plain old back rub at the disreputable place of business. Ashton reportedly told Mila he didn’t even know the place offered a menu of perhaps not-so-legal choices.

Allegedly Kunis is ready for baby number two and was preparing to tell Kutcher just as this crisis hit. Purportedly Kunis has worshipped Kutcher ever since they couple shared their first kiss as Jackie Burkhart and Michael Kelso on the Fox comedy. It may have taken nearly 18 years, but Mila got her man, and Ashton got his lady. Sources say Kunis isn’t giving up on the marriage that easily.

Maybe Ashton was a bit of a ladies man like his character, but the actor has purportedly settled into being a husband and father and Mila knows that.

Are Mila Kunis and Ashton Kutcher’s marriage going to go the distance or is it doomed? Was Ashton completely unaware of the massage parlor’s nasty reputation? Is a massage sometimes really just a massage?