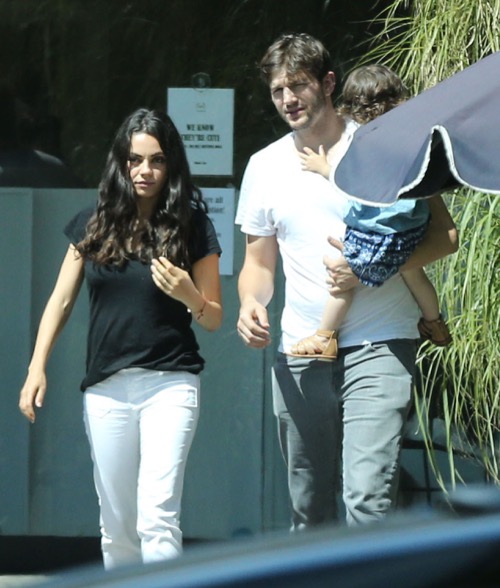 Milas Kunis is pregnant with baby number 2 and Ashton Kutcher is thrilled. The ‘That ‘70s Show’ co-stars, who married in July 2015, are parents to nearly 2 year old daughter Wyatt Isabelle.

A representative for Mila confirmed the exciting baby news to People. An insider close to Ashton revealed that the actor “genuinely lights up when talking about Wyatt and the little one on the way.”

Fans shouldn’t be surprised that the actors’ are expanding their family fairly quickly. Back in October 2015 Mila revealed in an interview that she was thrilled about having more children with Ashton.

In a more recent interview Mila stated that she has already mastered the art of being a “great partner, a great wife and a great woman.” Ashton has been a hands on father with Wyatt according to previous reports. Ashton reports for diaper duty as off as Mila.

Ashton recently branched out into producing ‘The Ranch’ with another ‘That ‘70s Show’ costar Danny Masterson.

Danny and Ashton also starred in the 10-episode Netflix original comedy. Ashton made no secret that producing and starring in the half-hour sitcom allowed for more control over his schedule and that meant more time for Mila and Wyatt and preparing for a new baby.

Mila Kunis and Ashton Kutcher have not yet made a formal statement of their own at this time. We’re certain further details will be forthcoming as Mila’s pregnancy progresses. However, Mila and Ashton have been extremely private and protective of their little family in the past, so don’t expect to hear too much from them.

The actors’ first met on the set of the FOX comedy ‘That ‘70s Show’ and Ashton was Mila’s first kiss. As on-screen girlfriend and boyfriend Jackie Burkhart and Michael Kelso, the couple shared their first kiss, first prom date and first love.

“I found the love of my life [on the set of the comedy]. We all get movie star crushes. I’m marrying mine.” And now Mila Kunis is expecting baby number 2 with Ashton Kutcher, the love of her life.

Congratulations from CDL to Mila Kunis and Ashton Kutcher and we look forward to hearing more as the pregnancy progresses. Will it be a little sister or a little brother for Wyatt Isabelle?

A representative for the couple confirmed to People magazine that Wyatt will soon be a big sister. Wonderful News ✨💕 #AshtonKutcher #MilaKunis