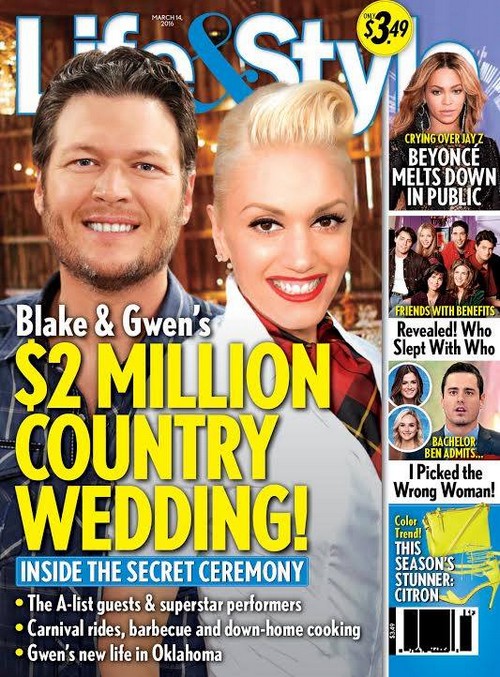 Is Gwen Stefani is planning a multi-million dollar wedding to Blake Shelton in The Voice star’s hometown. Miranda Lambert is fuming as Gwen reportedly has already settled in and is redecorating Blake’s Oklahoma home. Not only does Miranda allegedly think that Gwen stole Blake while they were still married but now the interloper is stealing her country style as well!

What, no extravagant ceremony at St. Paul’s Church in London and then another ceremony in Los Angeles two weeks later? Nope, according to sources who spoke to Life & Style, this time around Gwen’s wedding reception will be a big old country barbecue with down-home cooking and carnival rides.

Though Blake Shelton and Gwen Stefani are going with the feel of a small-town, close-knit, backyard potluck theme, this wedding is going to cost Blake about $2 million – give or take. And the guest list is reportedly is packed with VIPs from Hollywood, Nashville and all over the world.

Allegedly the couple wants to have a secret ceremony. Stefani and Shelton can probably pull that off. All the couple needs to do is get married on Blake’s huge ranch in Oklahoma – where they can also hold the circus-like barbecue reception.

Blake is good at keeping secrets so keeping these nuptials quiet should be too difficult. The country music superstar managed to keep the dissolution of his from Miranda Lambert quiet until the couple was already divorced. Miranda and Blake just went down to the courthouse, signed the paperwork and that was the end of Blake’s second marriage.

We’re guessing that even though Gwen agreed on this barbecue and carnival ride reception Stefani isn’t going to skimp on the wedding dress. When Gwen married Gavin Rossdale she wore a custom-made pink and white John Galliano for Dior gown. The “Used to Love You “singer might wear pink designer cowboy boots instead of designer stilettoes.

Will Gwen be able to wrestle Blake into a tux for this wedding? Shelton did dress up a little for his wedding to Miranda Lambert – a dress shirt, tie, suit vest, a pair of worn jeans and cowboy boots was the groom’s outfit of choice that day.

Summer is a great time for backyard barbecues. Will we Gwen Stefani and Blake Shelton tie the knot sometime this summer? Hopefully the third time’s the charm for Blake.

Blake Shelton and Gwen Stefani (looking a bit too much like a woman desperate to appear sexy?) at the 2016 Vanity Fair Oscar Party – FameFlynet