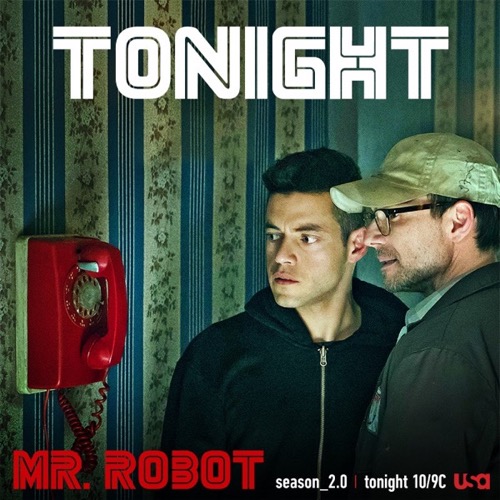 On the season finale, Elliott went missing; Mr. Robot tried to pull society back together; Angela went head-to-head with an old nemesis.

On tonight’s episode per the USA synopsis, “the Season 2 premiere finds Elliot in seclusion; Angela happy at E Corp; and fsociety delivering a malicious payload.”

Tonight’s Mr. Robot looks like it is going to be great and you won’t want to miss it, so be sure to tune in for our live coverage of USA Network’s “Mr. Robot” at 9:00 PM EST! While you wait for our Mr. Robot recap hit the comments and let us know how excited you are for another episode of Mr. Robot tonight.

It’s been a month since Five/nine changed the world and surprisingly there’s still seems to be a war of Us vs. Them on tonight’s Season Two premiere of Mr. Robot.

Unfortunately, Elliott was missing it because he was holding himself in seclusion at his mother’s house. Elliott had gone home after realizing that Mr. Robot wasn’t real and that was actually him doing so many things that he wasn’t aware of. So he had gone home because he thought that he could get his head together there though the routine he eventually created for himself to try and drown out Mr. Robot’s voice wasn’t working. Elliott was still seeing his father and every day that otherside of his personality kept on pushing him to rejoin the world as some sort of leader of the resistance.

Though Elliott or better yet the sane part of Elliott didn’t want to rejoin the messed up world. He had gone home to his mother’s because her house was practically a deadzone. There wasn’t any computer or internet access there so Elliott was unable to hack anyone much less get into contact with anyone in fsociety. So that meant Mr. Robot couldn’t do any of those things either, but that doesn’t mean the Mr. Robot persona was willing to give up. Everyday Mr. Robot tested Elliott’s control over himself and lately he’s been telling Elliott that the control he thinks he has was a mere illusion.

Elliott however, didn’t want to believe that his control over his own actions was that whimsy. So he kept on drowning him by cleaning up around the house and constantly eating out with his new friend Leon who didn’t ask too many questions. But there was something intruding on Elliott’s newfound peace and it had been bugging him since fsociety made their move. Elliott wanted information, Tyrell. Elliott wanted to know what happened with Tyrell Wellick because he has been trying to remember their last encounter on his own and so far his mind keeps stopping at the fsociety hideout. Which Elliott thought couldn’t mean anything good.

It had just been Elliott and Tyrell at the hideout that day. So Elliott needed to know what happened to Tyrell and he also needed to know where was Tyrell now because he feared the worst. Tyrell had seemingly disappeared after that day and now the FBI was looking for him because he had been connected to fsociety and the financial fallout so Elliott wanted to know if Mr. Robot did something him or his other personality was protecting from the truth. Yet, Mr. Robot didn’t want to say a word and to make things worse he was slowly revealing a nastier if not darker part of his personality.

Elliott’s old boss Gideon Goddard had actually stopped by Elliott’s mother’s place. He said that the FBI suspect he had something to do with the hack so he has been trying to help them get to the bottom of what really happened, but that he also suspected that they were still watching him. So Gideon had gone to Elliott because he had needed his help. Gideon wanted help proving his innocence because he had gone through his things and had realized that someone had logged on at AllSafe as him even using his passcodes. And so Gideon had hoped that Elliott would be able to help clear his name.

However, Elliott wasn’t exactly in a position to help. He knew that Gideon hadn’t been part of what he and fsociety did yet he couldn’t admit to be the mole at the now defunct company much less tell Gideon that his Mr. Robot personality had been the one to frame him for everything. So Elliott had had his hands tied. He couldn’t help his former boss and he didn’t want to hurt Gideon for knowing too much because Gideon had more on him than he knew. Mr. Robot on the other hand was demanding that they get rid of Gideon to cover their tracks so Elliott tried again to ignore him. And sadly that resulted in some pushback.

There was a guy in the neighborhood that he wanted Elliott’s help and Elliott had turned him down because he didn’t want to go near computers again. So what Mr. Robot did was contact that other man while Elliott thought he was sleeping and Elliott hadn’t known that he called someone or even agreed to help until someone else was able to recall a conversation they supposedly had together. But while finding out that he didn’t have control came as a shock, Elliott still didn’t want to rejoin the world and refused to do unless Mr. Robot told him where Tyrell was.

So while Elliott was playing a game of tug a war with himself, it was Darlene that was out there trying to lead fsociety against E Corp. Darlene had told what followers remained that Evil Corp still seemed as if they were winning in spite of what they did and that they needed to remind the people that he hadn’t been abandoned. fsociety had erased billions of dollars of debt and had caused markets all around the world to crash. Yet, none of that meant anything if E Corp continued to destroy lives in favor of profit and if they were also getting bailouts from the government to stay in power however Darlene wasn’t all doubting because she had come up with a plan that she knew would affect E Corp directly.

Darlene had hacked E Corp’s banks and she was refusing to allow them to carry on with business as usual until they handed over 5.9 million dollars. Though Darlene’s pan went much further than what they assumed was just greed because she had purposely asked that one of the chiefs at E Corp be the one to hand off the money. So she got what she wished when Scott Knowles agreed to do the drop off although he and apparently his people as well thought that they could use her plan to their advantage. E Corp thought that they could watch and wait to catch a member of fsociety before they gave up anything so they hadn’t expected what Darlene truly had in mind until it was too late.

Neither Darlene nor her people later approached Scott at the park. As it turns out Darlene had gotten a bike messenger to deliver a bag to Scott. The bag carried an fsociety mask and instructions. So all Darlene had to do was call him and threated him if he didn’t comply and then he did the rest. Scott put on the mask and he had unloaded the money for everyone to see then he burnt it all. He burnt millions of dollars in front of a crowd of witnesses and naturally they just all had to record it. And so as E Corp began to lose even more face all over the internet, the US government came back with a decision on the company latest request for another bailout.

The government said that they couldn’t afford to handover anymore and that the only way to preserve E Corp was for Phillip Price to step down as CEO. Which was something the powerful man refused to do because he felt that would really sink the company. So instead his PR team that unfortunately included Angela tried to work overtime to clean up with their image. But while the executives knew that most of things they were peddling were crap, Angela had surprised her former ally by actually believing it.

Angela had gotten a taste of power at E Corp so she later went back to Antara Nayar who was initially supposed to be representing her and the other victims of E Corp and told the lawyer that they shouldn’t meet up anymore. Angela apparently didn’t want to go through with her revenge plan, that is if she ever wanted to go through with it because Nayar had had her doubts, and it seems Angela now firmly believes that she belongs at E Corp. So regrettably Angela had sold her soul to the devil for that taste of power and it didn’t appear as if she was even contact with any of her old friends who might have brought her back from the brink.

But just as Angela and Darlene began taking two very drastic sides in Us vs. Them, Elliott received a call from Tyrell and that might not have been all in his head. So Elliott had helped bring on a financial crisis and he was partly responsible for someone targeting Gideon because they thought he had dealings fsociety however there was a chance albeit a small one that he hadn’t killed Tyrell. And so the mysterious person sending trinkets to Joanna Wellick could very well be her husband.