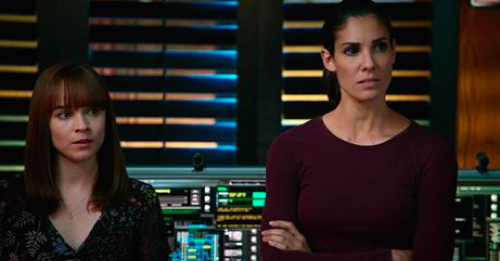 On the last episode, when a suspected North Korean spy was poisoned and hit by a truck carrying Christmas trees, the team had to search for who was responsible for smuggling spies into the country. Also, Deeks and Kensi tried to find a way to include their mothers in their Christmas plans, and Hetty noticed that Granger wasn’t feeling the holiday cheer. Did you watch the last episode? If you missed it, we have a full and detailed recap right here for you.

On tonight’s episode as per the CBS synopsis, “Kensi and Deeks go undercover at a decommissioned nuclear power plant as the team investigates the radiation poisoning of a Gunnery Sergeant moonlighting as a security guard there.”

Tonight’s episode looks like it is going to be great and you won’t want to miss it, so be sure to tune in for our live coverage of CBS’s NCIS: Los Angeles at 10:00 PM EST! While you wait for our recap hit the comments and let us know how excited you are for the season 7 episode 10.

Gunnery Sergeant Hugh Patterson passed out on base on tonight’s new episode of NCIS: Los Angeles because of radiation exposure of all things. But the case got assigned to the nearby NCIS because no one knew how Patterson got sick.

After he had passed out, Patterson had been taken to the hospital where they detected the radiation poisoning as well as the fact his health had been perilously in danger for months on end. Apparently the poisoning had caused a system shut down and if Patterson were to live then he would need someone to donate stem cells. And unfortunately his doctor told Deeks and Kensi that there was only 65 percent of that happening before it was too late.

But while Patterson lies in decline at some hospital, the guys couldn’t ask him questions and instead had to rely on the information provided to them by his eight months pregnant wife, Jamie. Jamie had been the one to tell Kensi and Deeks about Patterson moonlighting on the side. And, unbeknownst to her, her husband had been lying to her because he didn’t want to worry his heavily pregnant wife.

So when she had told them that her husband took a second job in construction, Jamie only ended up being half right. She knew her husband took on a second job to keep up with the bills that were going to come with the baby however Patterson withheld the truth about his new job. He was actually working security at Santa Flora Nuclear Power Plant.

Which as it happens was supposed to have been decommissioned seeing as they no longer generate power anymore but for some reason didn’t want to let either Sam or Callen through the front door. The guys showed up hoping to get some honest answers from the plant manager Ryan Westphal. And Ryan chose to take them on a tour that had first been created by their PR firm.

Safe to say, the guys were disappointed with the Disney white wash version. So when the chief engineer at the plant asked to see them alone – they took the opportunity offered. But it looks like Leo Chadmont wasn’t as reliable as they thought.

See, they believed Leo when he said the plant was one big safety hazard and that the plant itself was putting people at risk. Yet Leo forgot to mention something to them. He didn’t tell them that about all of things he had lost because of the plant being decommissioned.

His boss on the other hand took offence when Sam and Callen accused him of being reckless. He said that every safety measure had been put in place and that they shouldn’t Leo. Leo had taken a huge pay cut once the plant had been shut down and that lead to both his divorce and his kid dropping out of school.

So the guys were just realizing they had been had by someone with a motive to wreck the plant, when Patterson woke up and gave them the information they needed. He had told them that he had spotted an open door on of the camera feeds and had gone to check it out. And the timeable he gave them was what led to the deleted footage at the plant.

Though, luckily, nothing is ever really deleted and Nell and Eric had no problem with getting the footage. And what do you know the footage incriminated Leo.

Leo had still been at the plant when all safety measures were removed without anyone knowing it. The valve, the alarm, and the security cameras had all gone out but the footage the guys were able to track down showed the nuclear reactor had been devoided of all water. Which is how Patterson became infected.

But just as the NCIS team believed they were closing this case – an explosion alerted them to something else going on at the plant.

Leo had been in contact with a man he thought was a professor but who was actually a homegrown terrorist. Apparently the man had told him his name was Richard Nadra when it was really Rashad Nadar. And of course ISIS was never mentioned in their conversations but Nadar still walked away with just the right amount of information to completely deflood the nuclear reactor.

And without the water acting as a safety measure, radiation could spill over for miles on end.

So both Sam and Callen stayed behind after everyone else had been evacuated and they did their best if not to disarm the bomb then to at least remove it from the water supply. And when Rashad died after a nasty run-in with Kensi and Deeks – he had enough time to call the bomb. But by then it was no longer a threat to the nuclear plant.

Instead it was just a threat to Granger. Granger had gone inside with a heavily padded body suit and he literally threw himself on top of the bomb. Thereby taking away any effect it might have had.

And although Patterson was still in the hospital, his son was born and the stem cells from the umbilical cord will hopefully be just what the doctor ordered.