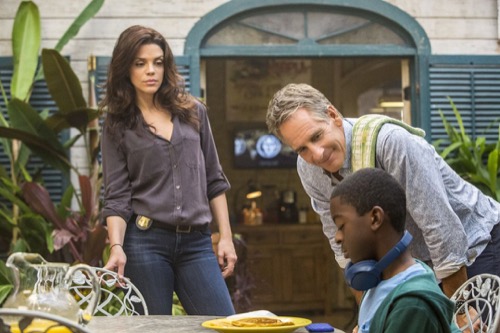 Tonight on CBS NCIS: New Orleans returns with an all-new Tuesday, December 13, 2016, season 3 episode 9 called, “Overdrive,” and we have your NCIS: New Orleans recap below. On tonight’s NCIS: New Orleans episode as per the CBS synopsis, “The team suspect foul play when a Marine corporal and amateur race-car driver is involved in a fatal crash. Elsewhere, the U.S. Attorney’s office gathers evidence for a Grand Jury indictment appeal in the Garcia (Julian Acosta) case that would extricate the cartel from the city.”

Agent Gregorio was back in New Orleans. She was apparently working with the US Attorney on building a case again Javier Garcia as a way to get the cartel out of New Orleans altogether. So unfortunately, she wasn’t going to be sticking around for long however, she didn’t hate the city anymore and more importantly she missed her friends. Gregorio had grown attached to everyone she had met through NCIS and she was still interested in following their cases. But her boss and the woman who acted as the liaison from the US Attorney’s office didn’t appreciate how involved she was with the death of Corporal Jared Connors.

Corporal Jared Connors who was a Marine officer and racing amateur had died recently in a car wreck on the race track and his father didn’t think his death was an accident. However, what happened to Jared was supposed to be NCIS business. Pride and his people were the ones that generally investigate anything nefarious relating to military officers on land and so Gregorio had been told that she should focus on putting away Javier rather than looking into Jared’s death. So Gregorio tried to do that yet Percy and her own need to remain part of the team kept drawing her back into the case.

Jared’s father Russ had been so sure that his son had been killed though later at the hospital he had surprisingly changed his story. He said that he must have been mistaken and that grief tended to do that to people. Yet, Pride and Percy both felt that Russ were hiding something and that he wasn’t the only one. Jared’s girlfriend Dana who was a racer herself had also been asked if she had seen or heard anything suspicious and she had said no while her eyes had said yes. So the agents had realized that the Russ and Dana were hiding something and they figured that no one was talking because they were scared.

Though the agents needed to know what or who they were scared of in case it had any relevance on the case. So they tried looking into Jared on their own and what they found had told whole other story because they had found money. A lot of money! The guys had estimated that Jared had kept at least a hundred thousand dollars hidden in his garage, but they knew a corporal couldn’t possibly make that sort of amount and they suspected that the money might have stolen. The money had still been in bank wrappers because it was so new and one of them had a strange ink on it as if a dye pack had exploded.

So Percy had contacted Gregorio to ask for her help. Percy had wanted to trace the serial numbers on the money they found to determine if it had actually been stolen and it turns out that it was. The money had been stolen in Mississippi in the latest robbery of what looks like a well-organized group and there had been several robberies before. Gregorio had gone the additional step of finding a pattern and she found out that a robbery happened in each town that had a race. But that proved to be a problem because Jared hadn’t been in town for three out of the four jobs and that meant he couldn’t possibly be the getaway driver. And so the guys had to find out how else he could be connected.

Only a problem cropped during the investigation. LaSalle had apparently found out that he wasn’t Tucker’s father. Melody had just said that he was because she had been scared of Daryl and hadn’t been able to file a restraining order against him unless something serious happened. So Melody had in fact come to New Orleans for help. She wanted someone that could protect her and her son so she lied to LaSalle knowing that he was a good man. However, LaSalle’s preoccupation with what was going on with Melody and Tucker was cut into the time he was supposed to be working. So Pride had to take LaSalle to task for that.

Pride hadn’t wanted to, but he had been left without a choice. LaSalle was getting into fights with Daryl and off doing his own thing when he had been told to stay on Sebastian who was running forensics. Yet, Sebastian had thankfully filled Pride in on what he found. Sebastian had found out that someone had hacked Jared’s car to make it accelerate and so there wasn’t any murkiness surrounding Jared’s death. He had truly been killed and Pride had gotten tired of waiting for answers. So Pride had gotten a warrant for Jared’s father and he had brought the other man in for questioning.

Russ Connors had been a mechanic and he had closely worked with his son. So pride and Percy figured he must know something seeing as he knew his son was murdered and didn’t want to stand by that decision after he got to the hospital. Though the truth was Russ knew a lot more than that. Russ knew that getaway driver for the robberies hadn’t been his son and that it had instead been Dana. Dana was the one that drove all those times and the money the guys found had been her cut from the jobs yet Dana hadn’t wanted to keep the money. She had wanted to leave the crew and that’s why she chose to be honest with Jared.

Dana had told Jared everything because she had wanted to put that part of her life behind her and so Jared had told her that he could help. But the crew that Dana worked with had stabbed Jared as a warning when she told them that she wanted to leave and then they had killed him when they found out that she had told him everything. So both Dana and Russ hadn’t said anything because they had been scared and they hadn’t wanted to die however the crew still wanted to pull off one more job in New Orleans and so they had kidnapped Dana because they needed her. Dana had acted as their advance planner and so she was the one that searched the area for them.

However, NCIS had Dana working to escape the others and so the guys found the crew pretty quickly. So Dana was later rescued and that had happened because Gregorio had worked with them the whole way yet that had alerted Hannah Lee. Hannah was the liaison from the US Attorney’s office and she had also been Gregorio’s ex-girlfriend. So Hannah could have made things difficult for Gregorio if she wanted to and for some reason she didn’t want to. She had seen how happy Gregorio was in New Orleans and she had been happy for. Even if they didn’t find anything new to put away Javier!

So Gregorio had been asked if she wanted to stay on and the truth was she did. Gregorio had grown attached to her friends and the area so she wanted to ask her boss at the bureau if she could be transferred to New Orleans permanently. That way Pride didn’t have to choose between her and Sebastian and she could still be part of them. Meanwhile, LaSalle had eventually found a way to protect Melody and Tucker. He had apparently found an outstanding warrant against Daryl and that coupled with assault on a federal agent meant Daryl was going away to prison for a long time. And so Melody was going to be safe because LaSalle had done what she knew he could – he protected her and her son.