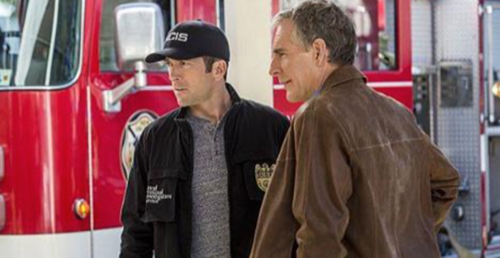 Tonight on CBS NCIS: New Orleans returns with an all new Tuesday April 5, season 2 episode 20 called, “Second Line,” and we have your weekly recap below. On tonight’s episode, the team investigates the murder of a Navy lieutenant during a second-line funeral procession, a New Orleans tradition involving a parade in honor of the deceased one’s life.

On the last episode the team discovered a surveillance van filled with photos of Agent Pride after Laurel’s attacked on campus and put in protective custody. Did you watch the last episode? If you missed it, we have a full and detailed recap right here for you.

On tonight’s episode as per the CBS synopsis, “the NCIS team investigates the murder of a Navy Lieutenant during a French Quarter second line funeral procession, a New Orleans tradition that celebrates the recently deceased with a musical street parade.”

Tonight’s episode looks like it is going to be great and you won’t want to miss it, so be sure to tune in for our live coverage of CBS’s NCIS: New Orleans at 9:00 PM EST! While you wait for our recap hit the comments and let us know how excited you are about the season 2 episode 20.

The body of Naval Lieutenant Darren Murray was found less than five feet from a funeral procession. Yet, there were no witnesses on tonight’s all new episode of “NCIS: New Orleans” that saw what happened or had even known that Murray was going to be there. Especially as he had told the family from the beginning that he wasn’t going to be able to attend.

Apparently, things were different down in New Orleans. They didn’t just walk in a solemn line or even take their cars to the cemetery in order to bury their dead. Instead they sort of threw them one final farewell. With trumpeters no less. As a way to honor the dead and celebrate the life they had lived.

So it hadn’t seemed strange that Murray had told the family he wasn’t going to participate. LaSalle even hates the Line because he doesn’t think that’s how he should be bury someone. But for someone like Murray who had already turned down attending, it did seem odd that he would be waiting in the wings to watch. And that he would he record it.

A camera had been found nearby. So the team knew that Murray had been taking pictures of the procession when he had been interrupted by his killer yet he didn’t know why he was taking pictures and who would want to kill him. And looking into Murray’s life hadn’t exactly yielded answers.

Murray had apparently been a very private person. He had been a Clinical Psychologist on base so his superiors thought that maybe he wasn’t adjusting as well as he could have. Though the fact that he had been attending the funeral of one of his former patients had made it seem like he had come to know James Boyd during their off times. So again it was strange that he was taking pictures.

Back at headquarters, someone had wondered if Murray was looking for someone in particular and that someone found him first. But it still begged the questioned of why. Why was Murray looking for someone and why did someone kill him? So they tried to look into Murray’s life once again and they were still trying to put the pieces together when someone got the drop on LaSalle at the late lieutenant’s apartment.

Some guy had snuck up behind him and had time to pull a gun. However, LaSalle was fortunately able to fight him off and the suspect got away before Percy could track him. So that all had been left was what LaSalle or better yet LaSalle’s shirt could tell Sebastian. And Sebastian had found it useful especially when it was combined with the bones.

LaSalle and Percy had found a bag of old bones at Murray. Yet, Sebastian was able to connect those bones with the dust from the bootprint that a potential thief had left on LaSalle’s shirt. So he ultimately realized that the bones had been of Jean-Baptiste. As in the Baptiste that had founded New Orleans and who had been buried with a lot of the family’s artifacts.

So the team naturally thought about gave-robbers. Apparently that’s become something of thing down in New Orleans as well because the older families had buried their ancestors with a lot of jewelry and gold. Though it was when they asked Karl Baptiste to open the family vault, that he realized someone had made it pass the locks. And therefore the family hadn’t known anyone had broken into the family crypt.

They had thought they were safe meanwhile LaSalle had recognized the man that had attacked him as someone that worked at the cemetery. So it had been an inside job so to speak. The man that had nearly killed LaSalle said he had helped his friend James Boyd to break into the Baptiste crypt yet he hadn’t known how Murray got his hands on the bones so he had assumed that Murray would also have the artifacts they took from the crypt.

However, that wasn’t the case and it turns out Boyd wasn’t dead. He had faked his death and he probably did that for the same reasons he had broken into the crypt. He had fallen off the wagon and had owed a lot of people. So the team had thought those people had in fact killed Boyd until they exhumed his body and found the ashes of someone else. Meanwhile the photos that Murray had taken of the Line, had captured Boyd attending his own funeral procession.

So odds are Murray had suspected that Boyd was still alive and had taken photos to catch him still obviously alive. Yet, Boyd got to him first and therefore he killed Murray to cover up what he had done. And if he was that desperate to fake his death then he was going to need to get out of town pretty fast.

And he was going to need money for that. Only Boyd didn’t have the bones to verify the rest of the artifacts and he was going to need those bones or someone just as old in order to sell the Baptiste ring. The ring that had been with Jean-Baptiste had been a gift from Louis XIV and it was estimated to be worth at least a million dollars. So the team conducted a sting.

They set a trap at the cemetery knowing that Boyd would have to go there himself seeing as they caught all of his partners. Including the Medical Examiner that had faked his death. So all NCIS had to do was lie in wait and eventually they caught Boyd in the act. And was able to arrest him for Murray’s murder.

Murray, much like Boyd’s wife, having been one of the few people that had honestly believed Boyd could turn his life around and that the Navy could be his fresh start.