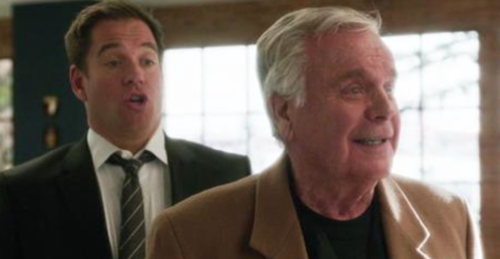 Tonight on CBS NCIS returns with an all new Tuesday March 22, season 13 episode 18 called, “Reasonable Doubts” and we have your weekly recap below. On tonight’s episode, a Navy Public Affairs officer is murdered, and the victim’s wife and mistress accuse each other of the crime.

On the last episode, the NCIS team re-examined an ambush on a group of Special Ops snipers in Iraq after an American couple was attacked in the same area six months later. When Gibbs discovered he needed the account of the lone survivor, Marine Gunnery Sergeant Aaron Davis (Taye Diggs), he tried to connect with the wounded warrior who was being treated for PTSS at Walter Reed Medical Center. Did you watch the last episode? If you missed it, we have a full and detailed recap right here for you.

On tonight’s episode as per the CBS synopsis, “a Navy Public Affairs officer is murdered, and the victim’s wife and mistress accuse each other of the crime. Meanwhile, Anthony DiNozzo Sr. helps a homeless woman who believes he is her father.”

Tonight’s episode looks like it is going to be great and you won’t want to miss it, so be sure to tune in for our live coverage of CBS’s NCIS at 8:00 PM EST! While you wait for our recap hit the comments and let us know how excited you are for the season 13 episode 18.

There was seemingly some confusion surrounding the latest case on tonight’s all new episode of “NCIS”.

Apparently the NCIS got the call about a body at Pax River. A young journalist in charge of detailing all of the navy’s newest protocols for their civilian newspaper had been shot found dead in his own yet things became confusing after the local police asked the two witnesses at the scene what happened. Laurence Jennings’s wife Angela claimed that she had seen Joann Allman shoot her husband and that she had hidden in the bathroom to call 911. Though Joann who just happens to be the victim’s mistress had had a claim of her own. She said that it was Angela that had shot Laurence and that she called 911 out of fear for her own life.

So this situation was a bit out there at best and no one at NCIS knew who could they believe? They could have gone with Angela’s story in which she said her husband had agreed to stop seeing Joann and thus Joann had killed Laurence because he was going to leave her. But if they went with Joann’s story then they would have to believe that Laurence had finally agreed to ask for a divorce from Angela because he wanted to be with Joann and Angela killed him for it.

Either way, though, Laurence was dead and there were two women that were claiming they saw the other shot him and that fought over the gun before they became the next victim. Therefore, there was gun residue on both of their hands and the only thing that NCIS could rely was on other people’s testimonies. Yet even that proved to be faulty.

Neighbors claim that Angela had often berated her husband and that they always felt bad for him seeing as he was such a nice guy however Joann didn’t exactly have a spotless record herself. Joann who was a lawyer had gotten laid off by her third rate firm for a supposed pattern of professional misconduct. So while Angela may not have been the greatest wife, Joann was also skirting permanent disbarment.

And although the story was murky, the NCIS team were actually divided on this one. Bishop had been the one to question the wife and she had come to see how angry Angela had truly been so she was left with the impression that Angela truly did kill her husband. However, DiNozzo had his money riding on the mistress. He had questioned Joann and his gut had told him that she was in fact guilty.

Yet, both of them had more than enough to count as motive. Angela it seems had shopping addiction that led to her being forty thousand dollars in credit card debt so her husband had been forced to cut up her credit card and the police were even later called after witnesses had reported Angela physically assaulting Laurence. So Angela could have killed her husband for the two million dollar life insurance policy, but Joann could have killed him for a similar financial situation.

Laurence had apparently been paying for everything in Joann’s life as well. Thus she may have killed him after she found out that he had stopped paying for the lease on her car as well as putting an end to her many cosmetic surgeries. And so the women both still looked guilty despite everything NCIS had found though there was literally no evidence to prove who was lying and who was telling the truth.

The women had tried to go down the lie detector route yet most of their answers were inconclusive and the one thing they had both been sure about was that they didn’t kill Laurence. So, at first when they were getting nowhere, Gibbs had to tell the director that they couldn’t take either woman to court seeing as there would be reasonable doubt. But then Abby tried something. She ran a simulation through her computer to prove who was standing where and she found out that neither of the two women could actually claim to have seen anything.

They had both been too far from the victim to have honestly witnessed the other shooting him. Therefore, they were both lying about what they had reportedly seen and the only reason they would have done so was if they had come to some sort of agreement. That made them blame each other as a way to throw so much confusion that neither the police no NCIS would able to prove a single thing.

However, DiNozzo hadn’t waited around for the answer to that question. He had been with his father who recently decided to go looking for a project for his later years and had ultimately chosen to take on an unfortunate homeless woman that had mistakenly believed he was her father. He wasn’t, yet he had felt for the younger woman. Who was obviously suffering from a mental illness.

So took Susan to the hospital and she had been diagnosed with a tumor though that wasn’t all of it. Susan it seems had believed DiNozzo Sr. was her father because a part of her had known that she wouldn’t survive her diagnosis and so she had wanted to reconnect with her own dad. That sadly passed away years ago after the two had a falling over her being gay.

And therefore it didn’t matter that Susan wasn’t related to them because DiNozzo and his dad wanted to at least be there for her towards the end. Thus they ended up just continuing to pretend in order for her still have her father and brother by her side.

But as for the case, it turned out that neither of them women were guilty of murder. They simply had gotten an email from Laurence saying that he was going to kill himself because they had ruined his life. So the only way that Angela could collect on the life insurance policy was for her to agree to split to money with Joann. And then cover up the suicide that would have voided the policy.