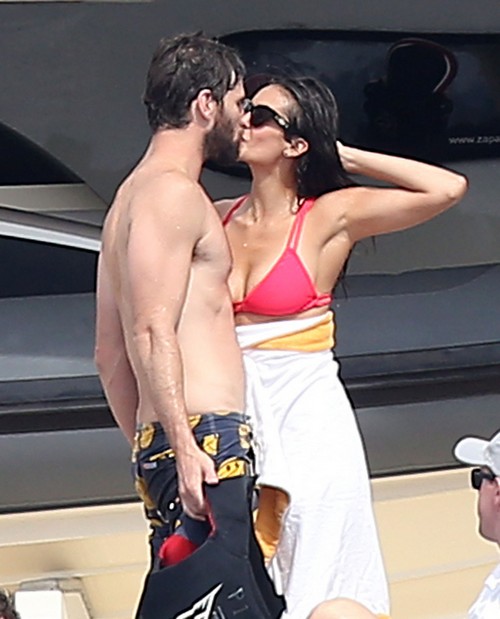 Nina Dobrev’s ex-boyfriend Austin Stowell is dating ‘Battle of the Sexes’ co-star Emma Stone? Is this latest round of the Hollywood game of ‘Who is Dating Who?’ causing Nina unbearable heartbreak and considering a return to ‘The Vampire Diaries’ to hide the pain?

Rewind just a bit before we get to Emma and Austin dating. Emma and ‘The Amazing Spider-Man’ co-star Andrew Garfield split sometime in 2015. At that time there was a lot of speculation about Emma dating ‘La La Land’ co-star Ryan Gosling. That was causing a lot of trouble between Ryan and his lady love, and mother of his daughter, Eva Mendes.

We’re seeing a pattern here with Emma Stone. She’s either dating a co-star or allegedly dating a co-star. So, it’s not a stretch to imagine Emma and Austin, who play a husband and wife in the new film, hooking up.

Now we come back to what’s been going on with Nina over the past few months. Nina hasn’t been romantically linked to anyone since calling it quits with Austin sometime before Super Bowl 50. The breakup was a bit of a surprise considering Nina Dobrev was posting all kinds of lovey-dovey photos of Austin Stowell on Instagram over the holiday season.

Has Nina decided to bury herself in work? It’s not as if Nina has had much going on career-wise since leaving TVD which means returning as Elena would take her mind off all the romantic disappointments she’s faced recently. ‘The Vampire Diaries’ fans are all excited because Julie Plec hinted Nina might return for the series finale. There’s a lot of talk that season 8 will be the last one for TVD.

Nina, meanwhile, has been relegated to live D-list television star. Mia Jones on ‘Degrassi: The Next Generation,’ one episode of the animated comedy ‘Family Guy’ and of course six seasons as Elena Gilbert on ‘The Vampire Diaries.’