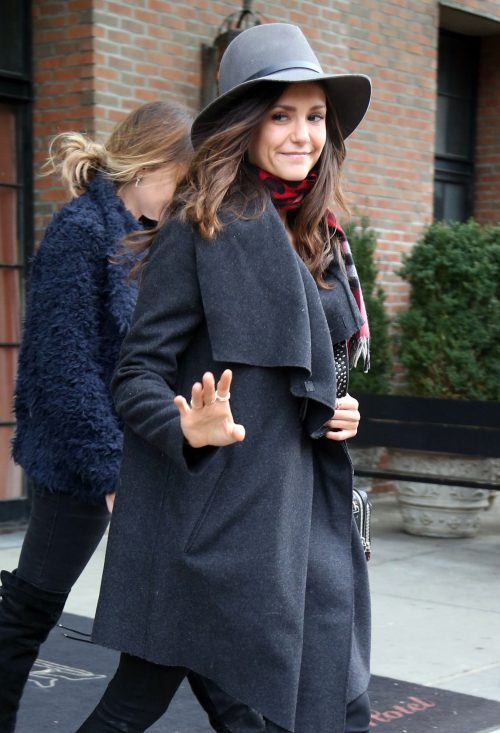 The Vampire Diaries rumors have been swirling around the news of Nina Dobrev’s return for Season 8, the final season, of the hit CW series. TVS showrunner Julie Plec revealed that Dobrev made an “emotional promise” to return for the last season but recent reports reveal that the Elena portrayer backed out of the return. But is Nina Dobrev just holding out for a bigger payday? Is Ian Somerhalder seething that his ex might make more bank than him when she comes back?

Since Nina Dobrev exited the show, co-stars Ian Somerhalder and Paul Wesley have ruled the show. Both Wesley and Somerhalder have directed episodes and are using their influence around the set to get what they want and to literally run the show. Ian Somerhalder has also enjoyed the cushy position and fat salary he’s earning to keep his wife Nikki Reed hanging around the set, but could Dobrev’s demands blow that all up? Is she planning an epic TVD takeover?

It looks like Ian Somerhalder hopes that his ex will NOT return to The CW show and stated at San Diego Comic-Con that the odds of her return are “an 18.75% chance.” But is that wishful thinking – or a hope that his statements can discourage Nina Dobrev from coming back? Season 7 ratings were down seriously and The CW execs may be happing that the return of Elena – or Nina Dobrev in another role – might boost their numbers for the final season and improve their residuals.

We saw at the end of Season 6 that something evil lurked in the catacombs under The Armory and that it took over Damon Salvatore and Enzo St John (Michael Malarkey) and turned them dark and twisted. Just before they were taken over, Damon heard a woman’s voice and whispered “Elena?” Will Nina Dobrev return as the most evil version of herself – worse even than her doppelganger Katherine? This could be a huge plot point that could bring viewers back in droves.

But is Dobrev lobbying Julie Plec and other TVD decision makers to make her the big boss on the set if she returns? Is Nina Dobrev demanding a paycheck for a return that’s significantly higher than what Ian Somerhalder is earning? Is Dobrev also lobbying for a producer credit and creative control? Is this why we haven’t received official word of her Season 8 return yet? Is Nina Dobrev asking for the moon to outrage her ex-boyfriend in revenge for their failed romance and him marrying Nikki Reed?

Is all this turmoil because Dobrev is still jealous and wants to make sure that Ian Somerhalder knows that she’s the boss if she returns to The Vampire Diaries? We’ll see how it goes and whether Julie Plec and The CW are willing to meet Dobrev’s demands to bring back the fan-favorite for the final season. What do you think? Do you want Nina Dobrev to return for the finale season? Do you think The CW needs to bring back Dobrev at all costs?

Share your comments below and check back with CDL for all the latest The Vampire Diaries spoilers and rumors as Season 8 gets closer and closer to its Friday, October 21 premiere!