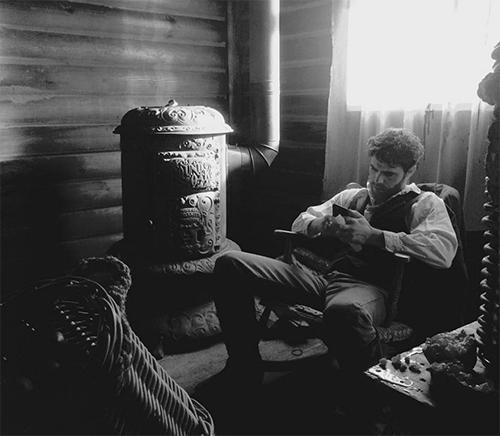 Will ‘The Vampire Diaries’ season 8 take viewers back in time to 1864 with Nina Dobrev’s possible return as Katherine Pierce? Paul Wesley shared a photo from the TVD series finale set teasing fans that Katherine may be headed back to Mystic Falls. Paul Wesley captioned the photo, “Bearded Stefan tweeting.”

The pic suggests that season 8 of ‘The Vampire Diaries’ will finally wrap up the love triangle involving Katherine, Stefan, and Damon [Ian Somerhalder]. Damon and Stefan were born in Mystic Falls and, until Katherine’s arrival, were best friends. Katherine arrived in town in order to hide from Klaus Mikaelson [Joseph Morgan] and captivated both Stefan and Damon. Eventually, she bedded both Salvatore brothers – and turned them into vampires.

‘The Vampire Diaries’ spoilers for season 8 tease that Damon will turn to the dark side. More TVD spoilers for the series finale suggest that Stefan will do whatever it takes to stop his older brother from unleashing his fury upon the citizens of Mystic Falls. Could Nina Dobrev bring Katherine Pierce back in order to help Stefan stop Damon?

Stefan [Paul Wesley], Damon, and Katherine have a complicated history. Before Katherine was captured and entombed with the other town vampires, she declared her love for Stefan and vowed they would be together again.

There has been no official word yet regarding Nina’s return for the series finale of ‘The Vampire Diaries.’ Ian Somerhalder has made it clear that he has no desire to work with Nina Dobrev. Does executive producer Julie Plec have plans to kill off Damon early on during TVD season 8?

No one knows for certain if it was Elena Gilbert or Katherine Pierce calling out to Damon during the season 7 finale of ‘The Vampire Diaries.’ If Katherine managed to break free of her entombment, there could be a very painful end to Damon’s life.

‘The Vampire Diaries’ season 8 returns on Friday, October 21 to CW. Hopefully, it won’t be a long wait until fans find out what showrunner Julie Plec has planned for the series finale of TVD.