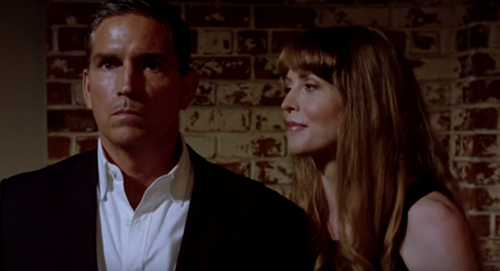 ‘Person of Interest’ spoilers for Season 5 Episode 6 ‘A More Perfect Union’ on Monday, May 23 tease that will see our favorite do-gooders dressed to the nines when they head to a wedding on the orders of The Machine while Samaritan continues to wreak havoc.

POI spoilers tease that two numbers come up as a targeted couple is about to get married and both bride and groom are at risk. John Reese (Jim Caviezel) and Harold Finch (Michael Emerson) head to the wedding to see how they can help.

But before the two numbers say “I do,” it looks like there’s a bachelor party featuring a sexy male stripper dressed as a cop. A very uncomfortable Reese is on hand for the festivities and looks increasingly out of sorts, particularly when one of the ladies tries to talk Reese out of his clothes.

Elsewhere, Lionel Fusco (Kevin Chapman) is sick of never being looped in on the big picture and heads off on a side mission, against Finch’s advice, to investigate some missing persons reports. Finch is worried but busy, so Root (Amy Acker) heads off to the police department to try and save Lionel from Samaritan.

Root tries to shed light on some key facts for Fusco, but he seems unconvinced and presses on with his search against advice. We should see some action as Sameen Shaw (Sarah Shahi), understandably frustrated with recent events (or fake events we should say), and takes out her frustrations physically.

At the wedding, Reese makes handy use of the table of bride and groom gifts and knocks out an attacker with one – let’s hope it was a nice sturdy stand mixer – because they guy goes down like a rock. After bashing the bad guy with the nicely wrapped gift, Reese quips, “oops” – hope they had a gift receipt.

Share your comments below on the action with Fusco, Reese, Root, and Finch – and be sure to come back to CDL for a LIVE recap of ‘Person of Interest’ Season 5 Episode 6 ‘A More Perfect Union’ on Monday, May 23.