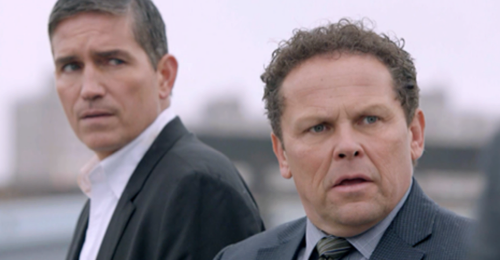 Tonight on CBS Person of Interest continues with an all new Tuesday June 21, season 5 finale called, “return 0,” and we have your Person of Interest recap below. On tonight’s episode, in the series finale, Finch, (Michael Emerson) Reese, (Jim Caviezel)  Fusco (Kevin Chapman) and Shaw (Sarah Shahi)  try to stop Samaritan from destroying the Machine.

On the last episode, Reese and Shaw chased Finch, who brought an end to Samaritan, himself and the Machine when he infiltrated a maximum-security government facility. Did you watch the last episode? If you missed it, we have a full and detailed Person Of Interest recap right here for you.

On tonight’s episode as per the CBS synopsis, “in the series finale, Finch, Reese, Fusco and Shaw try to stop Samaritan from destroying the Machine and strengthening its grip on humankind.”

Digital Armageddon didn’t bring about the end of the world or even the immediate death of either the Machine or Samaritan.

The Machine had remained semi-functional for several hours after the virus went viral. So it was able to contact its many friends in New York and warn them about what happened to Root’s body. It seems the Machine had been too sentimental to cremate Root however Samaritan had been smart enough to capitalize on that mistake when they later dug up Root and stole her cochlear implant. The implant being one of the best ways to stay in permanent contact with the Machine and therefore it was also the best way to spy on the Machine. Which was how Samaritan used it.

Samaritan figured out that the Machine was going to be making strike against it and it made sure to take precautions. Samaritan had a few lines of code that they were backed on a secret drive and with that it could resurrect itself at a later date. Though the Machine had realized what had happen when she was watching over Shaw at Root’s gravesite and noticed the uneven dirt around the tombstone. So the Machine was able to take direct action to get Shaw away from Samaritan’s men that were still in the area and she brought Shaw to the others.

Reese and Fusco had thought that it was the end for them when their own precinct turned on them thanks to one of Samaritan’s final last acts, but the Machine was able to step in there as well so she reunited the guys Finch and then all waited for Shaw to reappear. Shaw was going to be working with Fusco while Reese and Finch teamed up. And both sets had been given a mission. Finch and Reese was supposed to make their way into a secured vault in order to get the last piece of Samaritan though Shaw and Fusco were going to erasing all signs of the Machine.

The Machine and frankly the guys’ hiding spot as well had been found out. So the Machine had asked them to destroy everything down in the tunnels. Yet, the Machine hadn’t told everyone the full truth. She hadn’t told either Finch or Reese that the tunnel was going to be abandoned or that the train carrying the Machine would be destroyed. And she had remained secretive with Shaw and Fusco for that matter as well because they hadn’t known that Samaritan had uploaded itself onto a backup sever in space.

Samaritan it seems had gone to additional lengths to protect itself and it was going to destroy the connection between the satellite and earth’s server as a way to ensure that Finch would never get to it. But that wasn’t even the full extent of the Machine’s secrets. Besides keeping some of the gang in the dark about certain things, it also formed an alliance with Reese and together they came up with a plan to keep Finch safe through the end.

The Machine and Reese had both known that Finch was going to try and protect Reese so they had a come to a different conclusion. They had decided that Reese was going to be the one that risked his life to shutting down the satellite while they sacrificed themselves for the better good. So they had tricked Finch into going up on the wrong roof, which left Reese to go up on the right one. He had uploaded the virus and the Machine had been sent to fight Samaritan.

And they both knew that their fights would end with death, but they knew that’s what they had to do. So they saved Finch at great cost to themselves and that allowed Finch to go home to someone. He went home to the great love of his life – Grace his former fiancée. Though Finch wasn’t the only one that received a happy ending. Fusco also got his job back on the force so he didn’t lose his pension and would still be able to take care of his son.

But the one person’s whose post-apocalyptic future that wasn’t surprising was Shaw’s. Shaw eventually rounded up everyone involved with Samaritan and killed them all. So she basically wiped out anyone who knew what really happened during the cyber collapse and those that only suspected the truth had something to do with Samaritan were all in Washington. Thereby they were leery of officially looking into the program and was just happen to shut it all down without thinking about what they did too much.

So that could have been the end yet it wasn’t. Shaw later got a call on one of the few payphones in the city and the way she had looked at the security cameras soon after with a smile had made it seem that the Machine wasn’t as dead as everyone thought. And that it might have protected itself up on that satellite once it had defeated Samaritan for good.