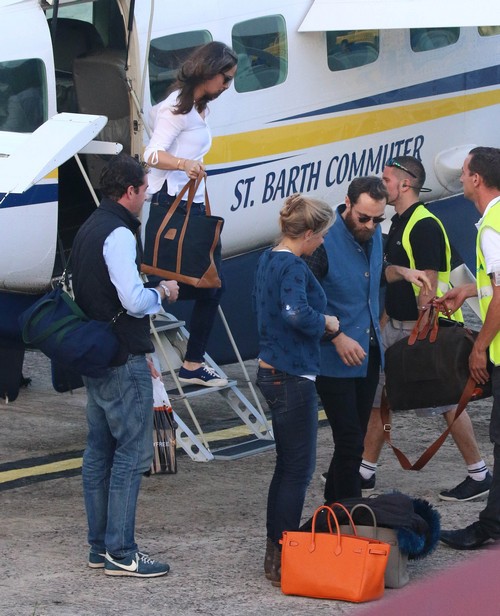 Is Pippa Middleton dating former boyfriend James Matthews? Kate Middleton would be delighted if this were true. Prince Harry could reunite with Lady Kitty Spencer! That would be a huge relief to the Duchess of Cambridge, don’t you think?

There was a lot of speculation about where Prince Harry disappeared to after Christmas with the Royal Family. Who was actually in St. Barts with the Middleton siblings enjoying a New Year’s holiday? If you look closely at the photos taken of Pips coming and going from the Caribbean island you may spot former boyfriend James Matthews.

James was the guy who accompanied Pips to Antigua in August 2015. Remember? James dated Pips just before she hooked up with Nico Jackson.

Kate Middleton must be dancing in through the halls of Anmer Hall! Best birthday present ever? The Duchess of Cambridge allegedly has been biting her nails hoping against hope that Prince Harry didn’t propose to Pippa Middleton during the St. Barts vacation. Looks as if Duchess Kate got her wish.

No one is quite sure where the heck Harry ended up after Christmas. Maybe the fifth-in-line to the throne is taking some time off before he heads off to Nepal in February. Or maybe the ginger-haired prince snuck off to spend time with suspected gal pal Kitty Spencer. Yes, that Lady Spencer – the late Princess Diana’s niece.

It’s nothing new for Royals to marry first cousins. It hasn’t happened in a long time, but hey, Kitty is a gorgeous blonde and most assuredly an upgrade – or two or three – from Pippa Middleton. It wouldn’t be so bad for Kate Middleton to have a cousin-in-law as a sister-in-law would it?

Queen Elizabeth may not be too thrilled to have yet another Spencer girl as a member of the Royal family! We can’t imagine Charles, 9th Earl Spencer would be enthusiastic about having Prince Charles as a father-in-law. AWKWARD! Kate Middleton might be the only one to give her blessing to that union.

Camilla Parker-Bowles may fly into one of those alleged gin and tonic soaked rages she’s famous for if Harry brings Kitty Spencer home for dinner with the Royal Family. This could get quite interesting!

Siblings James & Pippa Middleton are seen catching a flight from St. Barts to London with friends on January 7, 2016. Rumors are swirling that Pippa is dating Prince Harry by FameFlynet