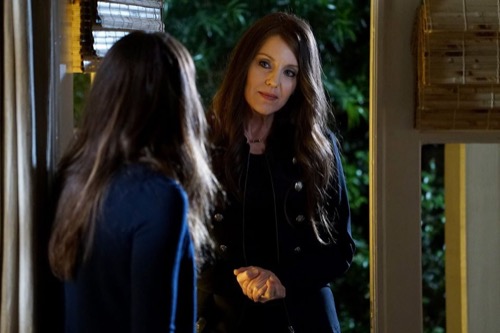 Pretty Little Liars returns to ABC Family tonight with an all new Tuesday, June 21, season 7 episode 1 called “Tick-Tock, Bitches” and we have your Pretty Little Liars recap below. On tonight’s episode, in the seventh-season premiere, the ladies race to save Hanna following her abduction by Uber A.

On the last episode, after Alison was confronted with a sudden, mysterious jeopardy, the Liars decided to take things into their own hands for a counterattack.  Did you watch the last episode? If you missed it, we have a full and detailed Pretty Little Liars recap right here for you.

On tonight’s episode as per the ABC Family synopsis, “in the seventh-season premiere, the ladies race to save Hanna following her abduction by Uber A and must hand over evidence revealing Charlotte’s real murderer in order to do so.”

The season 7 PRETTY LITTLE LIARS recap is going to be really exciting and we’ll be recapping it for you right here. In the meantime, sound out your comments below and let us know how much you are looking forward to the season 7 Pretty Little Liars recap tonight!

Tonight’s Season 7 premiere of Pretty Little Liars kicks off with Spencer, Emily, and Aria in the woods. They’re crying as they dig a grave for someone. Spencer says that it is what Hanna would have wanted. Then she snaps that it used to be a “well thought out plan and now it is just first degree murder.”

Toby tells everyone to stay put and heads inside to see who the woman is. He learns that she is Mary Drake, Charlotte’s biological mom, and she just bought the Lost Woods Resort. Apparently, she is at the police station to report a break-in. Caleb and the liars are convinced that Mary is “A” and she has Hanna. While they are all outside arguing over what to do next, everyone gets a text message from “A.” It reads, “A lie for a lie, an eye for a lie, the bell tolls for Hanna.”

Everyone races to the bell tower, certain that Hanna is inside. They find Hanna hanging from a noose at the top of the tower, she looks like she is dead. They race up the stairs and untie her – she doesn’t have a pulse. Everyone starts crying, but then Caleb realizes that it is a mask on a dummy, it’s not really Hanna. They pull a string on the dummy and a creepy voice says that they have 24 hours to find Charlotte’s killer or Hanna is dead.

Everyone heads back to Spencer’s house to make it command center – her parents are out of town on a cruise. Spencer says that if they all work together, they will be able to figure out the mystery before Hanna is dead. They all write down who they think the killer is and toss it in a bowl for anonymity. Mona reads the name aloud. Most of the answer are Alison, but one person wrote Spencer and one person wrote Mona.

Aria and Ezra point out that the night that Charlotte was killed, they saw Alison out in the middle of the night. Spencer thinks that Charlotte may have snapped and Ali killed er in self-defense. They decide to split up and look for clues.

Spencer, Toby, Caleb, and Mona head to the Lost Woods Resort. Spencer and Toby sneak inside the office to snoop around.

Emily heads to Welby to see Alison, she talks to Elliot and tells him that Ali wasn’t seeing ghosts and Jessica has a twin sister. Obviously, he already knew that since he is working with Mary. Elliot says that it doesn’t really matter now, Alison is having a complete psychotic break. Alarms go off in Ali’s room and Elliot rushes inside and injects a needle in to her while she is thrashing around on the bed and puts her to sleep. Emily watches through the window horrified.

In the office at the motel, they find a Passport proving that Mary Drake got to Philly the week that Charlotte died. They also find a book about cyber crimes.

Aria and Ezra head to Alison’s house to see if they can find the red jacket she was wearing the night that Charlotte was killed. They find a chest at the foot of the bed, but its locked. While they are searching the bedroom, Elliot comes home from the hospital. Aria and Ezra hide in the closet while Elliot opens the trunk at the foot of the bed. He pulls out a bag and start packing it, and then he grabs a box of surgical equipment from under the sink. Ezra and Aria slip out the window.

There’s a knock at the door and Spencer answers it – she is shocked to see Mary Drake standing there. Mary says that she wants to talk to her parents, Spencer says that they aren’t home, but she invites her inside for some tea.

Emily is still at the hospital, Elliot is gone, so she slips in to talk to Alison. Alison wakes up and she isn’t making any sense, Emily asks her if she killed Charlotte, and Alison replies “Please God forgive me.”

Spencer and Mary are having an awkward conversation. Mary says that Jessica was always jealous of her, she turned all of their friends and family against her, and ran Mary out of town. Spencer asks why she came back – Mary laughs, because Jessica is dead. Before she leaves, Mary tells her to lock her door, “you can never too safe.”

Time is winding down – there are only 6 hours left for them to find Charlotte’s killer. Caleb and Mona also have Mary’s cell phone tapped. They hear her talking to a guy with an accent, they track the call and learn that he is calling from a bar called Snookers. Aria is nearby, she says she will go check it out.

Aria heads to the bar and orders a beer, it’s a little crowded and she can’t find any guys there with a British accent. Her and Ezra’s old song by The Fray comes on the jukebox and she gets nostalgic and heads back to his apartment, she says that she wants to spend the night with him.

After her disturbing chat with Alison at the hospital, Emily sneaks back to Alison’s house to snoop around. She takes a trip down memory lane and has flashbacks to her and Emily years ago. Emily goes through an old box and finds the red jacket that Alison was wearing the night that Charlotte was killed – and it looks like it has blood on it.

Meanwhile, Hanna is still alive and being held prisoner in some sort of basemen in her underwear. She suddenly has an epiphany and after 24 hours she decides to start looking for a way to escape.

There is less than an hour left on the clock – everyone is back at Spencer’s house and going over the Mary Drake file. Emily arrives, she says that she thinks that Alison killed Charlotte, she pulls out the red jacket and hands it over. While they argue over whether or not to hand Alison over to “A”, Caleb grabs the jacket and runs out of the house.

Caleb heads to the Lost Woods resort and text “A” and says he has the proof that Alison is Charlotte’s killer. Meanwhile, Hanna has already escaped and is running through the woods barefoot. A car comes driving down the road, and Hanna flags them down for help, only it is Mary Drake.

Caleb leaves the jacket and heads back to Spencer’s. He thought that “A” was going to let Hanna go – but they haven’t gotten and texts or calls. Meanwhile, Alison is strapped to her bed at the hospital and somebody slips in to her room, it’s Elliot. He pulls another syringe out of his jacket pocket and injects her with it. He whispers in her ear, “I know you killed Charlotte” right before he injects her with the needle.