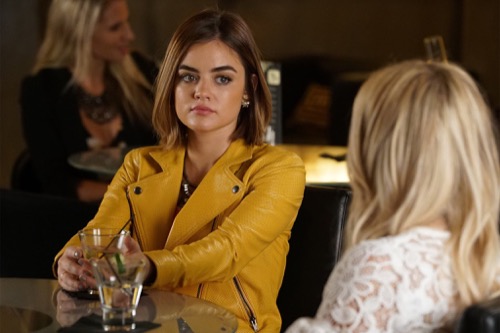 Pretty Little Liars returns to ABC Family tonight with an all new Tuesday February 23, season 6 Episode 17 called “We’ve All Got Baggage,” and we have your recap and spoilers below. On tonight’s episode, two lovers finally get married with a special officiant’s help; the Liars investigate a new suspect in the case

On the last episode, while new discoveries were made in the investigation of Charlotte’s murder, the truth began to emerge about the Liars’ personal lives. Spencer was concerned to learn her mother was keeping a secret of her own. Did you watch the last episode? If you missed it, we have a full and detailed recap right here for you.

On tonight’s episode as per the ABC Family synopsis, “two lovers finally get married with a special officiant’s help; the Liars investigate a new suspect in the case; Aria tells Ezra the truth about her involvement with his book; Spencer and Caleb deal with a media leak; and Emily’s harassed by a stalker while she continues her search for Sara.”

The season 6 episode 17 of PRETTY LITTLE LIARS is going to be really exciting and we’ll be recapping it for you right here.

Tonight’s episode of Pretty Little Liars kicks off with Hanna, Emily, and Alison in Sara Harvey’s hotel room – apparently Sara Harvey finally checked out of the hotel, and she left her room a total mess. They head in to the closet so that Emily and Hanna can show Alison the hole that leads down in to the basement. The hole is gone though – it looks like Sara sealed it off and painted over it. Alison thinks they are going crazy, and is obviously skeptical that there was ever a hole there to begin with.

At Spencer’s house – Caleb tells her that the deed is done, he deleted all of the other campaign’s medical files on her mother. Emily interrupts Spencer and Caleb’s make out session. Emily wants Spencer to back down to Hollis Medical Center with her to look for clues linking Sara Harvey to stealing her eggs. Spencer tells Emily she needs to relax – Sara left Rosewood, she needs to let it go.

Aria fills Liam in on Ezra’s return to Rosewood. Aria is completely screwed – she submitted chapters to Ezra’s book that she wrote so he didn’t lose his publisher. But, now Ezra is back – and he wrote his book and wants Aria to submit it. Her boss Jillian is going to find out that Aria lied and wrote for Ezra and fire her.

Emily heads to Hollis to register for classes – she bumps in to the reporter that was quizzing Spencer about her family, Damian. He makes friends with Emily and invites her to a psychology seminar later that evening.

Spencer finally confronts her mother and tells her that she knows her cancer came back. Veronica says that she didn’t want to worry her because the prognosis was good and it was all taken care of. Spencer warns her mom that she needs to come clean and reveal her cancer scare to the public before the opposing campaign uses it against her.

At Alisons house she gets a text from an unknown sender and it reads, “Does the good doctor know why Charlotte ran out of the house that night?” It looks like Alison might be hiding a few secrets about Charlotte’s murder too.

While Hanna is helping Aria’s mom Ella pick out her wedding dress, Bruce takes Aria out to lunch. Her dad wants her to officiate her parents’ wedding. She can get a license off from the internet and then write the vows herself since she is such an amazing writer. Aria is shocked by the idea and even more shocked when she learns that her brother Mike is boycotting the wedding and refuses to come.

Spencer and Caleb are suspicious of Melissa, since her suitcase handle could be Charlotte’s murder weapon. They quiz her about how her suitcase got broken – and she blames a cab driver in Philly for being wreckless with her luggage. They catch her in a lie, she said there was a baseball game that day – but the game was in Baltimore, not Philly.

Aria comes clean to Ezra and confesses that she already sent in six chapters of his book that she wrote himself. Surprisingly, Ezra is not furious – he is actually thankful that she saved his butt. Before they decide whether or not to come clean about the book to the publisher, Ezra wants to read what Aria submitted.

Alison is sitting outside with Dr. Rollins – she comes clean to him about the night that Charlotte was murdered. Apparently, Alison came clean with her sister and told her that she was dating Dr. Rollins. Charlotte felt betrayed that her sister was hooking up with her doctor, and she ran out of the house. Alison blames herself for Charlotte’s death.

Meanwhile, Hanna returns home and Emily is getting ready to go to the psych seminar with Damian. Emily fills Hanna in on Caleb’s theory that Melissa is hiding something and her suitcase handle may have been used to kill Charlotte. A package arrives for Emily, it’s a box of baby books, a note inclosed reads “You better start talking before our baby does.”

Hanna tracks down Spencer and Caleb at the brew – she tells them that she thinks Melissa killed Charlotte. Hanna shares a story with them, apparently she ran in to Melissa at a party in London a few years ago. Melissa was drunk and crying in the bathroom, she said that Wren broke up with her because Charlotte called him from Radley and told him that she killed Bethany Young. Charlotte DEFINITELY had motive.

Liam bumps in to Ezra and they discuss his new chapters. Ezra wants to make it clear to Liam that he is not writing about Aria in his book – it’s a different girl – just so that things aren’t weird. Aria arrives and sees her ex talking to her boyfriend. Liam storms out, apparently he had no idea that Aria and Ezra had dated – he thought that Ezra was just her favorite teacher, and he is NOT happy.

Spencer heads home and congratulates her mom on her speech coming clean about her cancer. Veronica has bad news though. Someone leaked a medical story about Christine Phillips’ daughter Yvonne, and revealed that she had an abortion in high-school. The Phillips’ campaign is blaming Veronica’s campaign for leaking her medical files – and they are being investigated.

It’s time for Ella and Byron’s wedding ceremony, it’s small and intimate and everything that Hanna and Ella hoped that it would be. As promised, Aria officiates her parents’ second wedding and reads vows that she wrote herself for them. Hanna watches as they say their “I Do’s” – and she gets a bit emotional.

Meanwhile, Emily is on a solo mission, she heads to the diner that called Charlotte the night that she was murdered – it’s in the middle of the woods, and appears abandoned. While Emily is snooping around the building an SUV comes out of nowhere and revs its engine at her and drives straight towards her like they are going to hit her. Emily makes a run for it, and climbs on top of a shed – while she is up there she finds what looks like the handle to a suitcase lying on the roof. The SUB comes back again and tries to hit Emily and she drops the weapon that she found. The driver of the car grabs the weapon and drives off.

Veronica Hastings barges in to the barn and accuses Spencer of leaking Yvonne’s abortion story. Spencer denies it, but the investigator tracked it to her IP address. Caleb tries to cover for Spencer and says that he is the one that leaked it. Veronica kicks him off the campaign and tells him to get off their property.

After their fight, Liam still shows up at Aria’s parents’ wedding. She apologizes to him for not telling the truth about her history with Ezra. Liam thinks that Aria has been writing the chapters about Ezra, and that she is still in love with him. Aria says that she thought she was too – but after writing those chapters, it helped her get some closure and “work it out.”

Emily makes it home safely – she tells Hanna all about her run-in at the diner and that she may have found the murder weapon, but the person trying to kill her with a truck stole it. Tonight’s episode ends with Alison showing up at Aria’s doorstep – she and Dr. Rollins want Aria to marry them in her backyard under the twinkle lights from the wedding earlier.