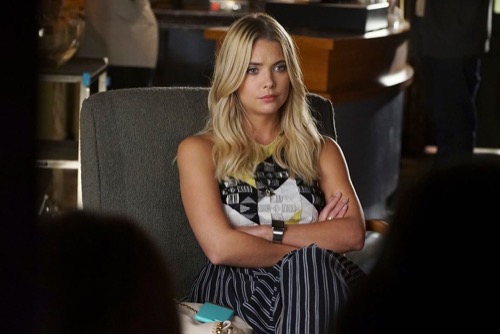 Pretty Little Liars returns to ABC Family tonight with an all new Tuesday March 8, season 6 Episode 19 called “Did You Miss Me?,” and we have your recap and spoilers below. On tonight’s episode, the Liars plot a counter attack after Alison’s (Sasha Pieterse) put in jeopardy; Hanna (Ashley Benson) and Caleb (Tyler Blackburn) make a plan to come face-to-face with the tormentor.

On the last episode, the Liars began to take the threats more seriously after Emily’s nearly killed; Spencer comforted Caleb, who’s dealing with the consequences of taking the blame for the leak; Emily setted out to find the stalker; Aria and Ezra moved forward with the novel; and Hanna avoided her personal life. Did you watch the last episode? If you missed it, we have a full and detailed recap right here for you.

On tonight’s episode as per the ABC Family synopsis, “after Alison is confronted with a sudden, mysterious jeopardy, the Liars decide to take things into their own hands for a counterattack. Hanna and Caleb work together to develop a plan to come face-to-face with the tormentor. Emily and Spencer team up to investigate if Mona had any involvement with the murder. Aria and Ezra continue to work on the book though it might be more difficult than anticipated.”

The season 6 episode 19 of PRETTY LITTLE LIARS is going to be really exciting and we’ll be recapping it for you right here. Sound off in the comments down below how you have been enjoying Pretty Little Liars so far!

Tonight’s episode of Pretty Little Liars kicks off where we left off last week – Emily is confronting Mona. As they were leaving from Hanna’s mess of a bridal shower – Emily noticed that Mona’s keys had two little pink dice on them, just like the keys that the witness at the Crows Diner told the police about. Emily demands to know if Mona called Charlotte the night that she was murdered from the diner.

Mona confesses that she called Charlotte and asked her to meet her at the diner, she sat there all night but Charlotte never showed up. Mona says she just wanted to talk to Charlotte in private – to see what she was going to do now that she was free. Emily accuses Mona of plotting to do something to keep quiet. Mona snaps back that it doesn’t matter what she would have done – because she never showed up.

The next morning Emily fills Spencer and Aria in on her conversation with Mona. Aria wants to run to the police station and tell Tanner that Mona was the girl at the diner – but Spencer convinces her to hold off. Spencer points out that if Mona is “free range” then they will be able to keep an eye on her and see what she is up to.

Hanna is at the loft with Lucas – she calls Jordan and tells him that she is going to be in Rosewood a little bit longer. Since it is Lucas’s loft, he looked at the controller on the I-Pad to see what happened that caused the fire to go haywire at the bridal shower. He promises to get it fixed, he doesn’t understand why it malfunctioned.

Alison and her new husband are at a bed and breakfast celebrating their honeymoon. They make plans to spend the day reading and taking in the scenery, and make out at the top of the stairs. Ali turns to walk down the stairs and somehow trips and falls all the way down the banister. Alison wakes up in the hospital, she seems to be in one piece, but has a concussion. She whines that she wants to leave – she doesn’t want to spend her honeymoon in the hospital.

Ali sends the liars in Rosewood a selfie from the hospital and explains what happened – she says that it was an accident though. The liars are freaking out, she is the second one to wind up in the hospital, and election day is only three days away. Whoever is stalking them, gave them to election day to give up the killer…or else. It looks like their stalker is getting impatient.

Hanna heads to the hospital to check in on Alison, she says that she is headed back to Rosewood tomorrow. Her husband got called in to work in Chicago, so Ali is going to be in Rosewood all by herself. Elliot interrupts their chat with more flowers, and Hanna snoops around the room. She finds one bouquet with a suspicious card in it. Hanna opens the card and it has five pictures of the liars – Aria, Alison, and Emily’s pictures have red X’s through them. That means the only girls left that the stalker hasn’t attacked are Hanna and Spencer. It looks like Alison’s fall may not have been an accident after all. Hanna doesn’t tell Ali about the card – she folds it up and sneaks it out of the room.

Meanwhile, Emily is tracking Mona and spying on her. She calls Spencer and shows her a picture of Mona sitting on a park bench with a guy. It’s not just any guy though – it’s the same guy that brought Sara Harvey to Charlotte’s funeral and helped her in and out of the car. How does Mona know Sara Harvey’s driver?

Spencer and Emily decide to follow the driver, he heads in to City Hall and leaves with a tube. They manage to distract him with a minor fender bender and Spencer gets a sneak peek at the documents in the tube – its more blueprints of Radley. Spencer heads to City Hall to try and get a copy of the blueprints he has, she tells Emily to keep following him.

Meanwhile, Aria is at Ezra’s house – they are working on their book together. It is starting to get a bit awkward, because why would writing a book with your ex-girlfriend abou thte girlfriend you just lost not get awkward. Ezra gets caught up in details about his and Nicole’s last goodbye and Aria helps him through it. Afterwards, they head to out to eat and meet up with the publisher for dinner to discuss their book.

Hanna arrives back in Rosewood, and she goes straight to Caleb. She is obviously panicking because she saw the card from the new Big Bad, and knows that either she or Spencer is back. Hanna tells Caleb that she thinks it is time to call the stalker’s bluff and give them what they want. Spencer arrives at the barn and interrupts Hanna and Caleb’s chat.

Caleb tells Spencer that she needs to listen to Hanna. Hanna confesses to Charlotte’s murder – she says that she snuck out of the hotel and saw Charlotte at the church and hit her in the back of the head with a candle stick. Spencer is mortified – and then Hanna says that she is just kidding, but that is what she is going to tell the police. Apparently, Hanna and Caleb have devised an entire fake plan to fake confess to the murder to trick “A.” Spencer obviously doesn’t like the plan, or the fact that Hanna is holding Caleb’s hand on the couch.

Emily is frantic – she hates Caleb and Hanna’s plan, she knows that it is going to backfire. She calls Aria to fill her in so that they can all be on the same page. Emily tells Aria that she is going to have to let Ezra know what is going on. Hanna heads back to the loft and Lucas is waiting for her – he wants to help her start her own fashion business, and has basically bought an entire factory in Rosewood for her. Aria sits Ezra down and tells him everything – from Alison and her fake accidents to all of the texts and threats. Aria explains, “it’s happening again, but this time we are going to do something about it.”

Alison wakes up in the hospital – and her not-so-dead mother is standing over her. Alison is certain that it is her medicine, and she is just dreaming. Alison’s mom tells her that Elliott is going to take good care of her and protect her and be an amazing husband – then she tells Alison to rest, and promises she will be happy from now on.

Mona is walking down a dark street in town and heading to her car – Sara Harvey steps out of the shadows and asks Mona what she wants, she knows Mona has been snooping around her driver. Mona says she just wanted to know what Sara was up to – she threatens Sara and tells her to leave the liars alone. Mona and Sara snark back and forth a bit, and then Sara skips off in to the dark.

The liars have a meeting with Caleb and Ezra in Spencer’s barn – they all agree on Hanna and Caleb’s shady plan to fake confess to the murder to bring “A” out of hiding. Hanna texts the mystery number that has been harassing them and says, “Leave my friends alone, I killed Charlotte.”