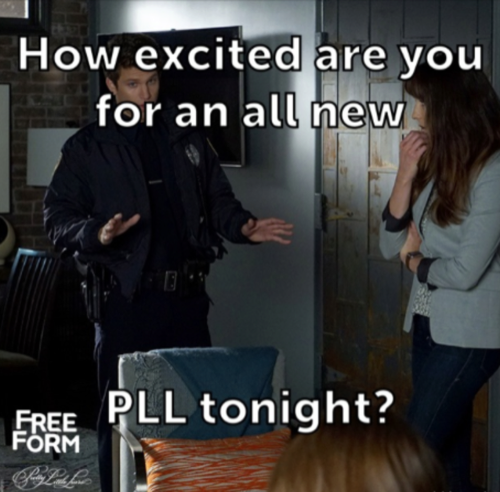 Pretty Little Liars returns to ABC Family tonight with an all new Tuesday, July 12, season 7 episode 4 called “Hit and Run, Run, Run” and we have your Pretty Little Liars recap below. On tonight’s episode, the gals try hiding a mistake, but they hurt their romantic relationships in the process.

On the last episode, the ladies attempted to rescue Ali from the psychiatric hospital to protect her from Uber A’s threats, but they made a fatal mistake that impacted everything. Did you watch the last episode? If you missed it, we have a full and detailed recap right here for you.

On tonight’s episode as per the ABC Family synopsis, “the gals try hiding a mistake, but they hurt their romantic relationships in the process. Meanwhile, Spencer makes a regrettable move in response to Hanna and Caleb’s kiss; and Mona intervenes with the cover-up plan.”

The season 7 episode 4 of PRETTY LITTLE LIARS is going to be really exciting and we’ll have your Pretty Little Liars recap down below for you.

Tonight’s episode “Hit and Run, Run, Run” picks up after last week’s shocking hit-and-run murder of Elliot Rollins. Frantic to cover their tracks, the Liars bury Elliot’s body in the woods. Aria urges the others to call the police but the group decides that the best course of action is to bury the body, hoping that it will appear that Elliot left town. Allison steals Elliot’s hospital keycard so the girls can sneak her back in Welby.

Leaving the scene, the girls begin to formulate a plan. Aria will sneak Allison back into the psych ward while Spencer will hide Elliot’s phone and jacket in a train out of town. Realizing the potential repercussions of being the driver of the car when Elliot was hit, Hannah doubts the plan and panics that she will go to jail for vehicular homicide.

At the police station, Toby continues to dig into Elliot’s past, keeping it secret from Yvonne. Meanwhile back at Spencer’s barn, Spencer frantically tries to clean up the dirt and mud the girls tracked in from the woods. Wishing to repair their strained friendship, Hannah asks Spencer if the two can move past her kiss with Caleb. At that moment, Caleb shows up at the door, wanting to talk about their fight over his kiss with Hannah.

Not wanting him to see the state of the inside of the barn and ask questions, Spencer insists that he leaves, as Hannah hovers behind the door hidden. Caleb recalls a moment he and Spencer shared in the past, revealing the depth of his feelings for her. Heartbroken, Spencer is forced to turn him away to protect him from being involved in their crime.

At Welby, Aria and Allison break-in with Elliot’s keycard. While Aria is checking to make sure the coast is clear for Allison to return unseen to her room, Allison disappears.

At the Radley Hotel, Emily bartends while Spencer fills her in on the latest developments. She tells Emily that she used Elliot’s credit card to purchase a ticket on an outbound train and, once the train arrives in the station, she will leave his cell and jacket in the train. Meanwhile, Emily will pack up Elliot’s things in an overnight bag, making it look like he left town in a hurry. Spencer also confides to Emily that Hannah kissed Caleb.

Meanwhile at Welby, Aria searches for Allison, finding her huddled in a stairwell. Allison tells Aria that she can’t go back into the room. Aria promises that she and the other girls will come back and get Allison later. Agreeing to return to her room, Allison hesitates to allow Aria to strap her back down into the bed, fearing that she will be defenseless. Aria asks Allison outright if she was responsible for Charlotte’s death.

Allison confesses that she told Charlotte on the night of her death about her relationship with Elliot and that Charlotte stormed out. Allison followed Charlotte into the church. A flashback shows the two of them arguing in the bell tower. As Allison leaves she hears a noise in the tower, hesitates and then leaves. Aria assuages Allison’s guilt by telling her if she hadn’t left the church, she might be dead along with Charlotte. Before Aria leaves, Allison has her put the face mask back over her, so the nurses who check on her will see the extent of the torture Elliot put her through.

Back at the Radley bar, Spencer has a drink with a stranger.

Arai and Hannah go back to the scene to destroy the body and Aria tells Hannah that Allison wasn’t responsible for Charlotte’s murder. Once they arrive they realize that Lucas’s car is missing.

Spencer continues chatting and drinking with the stranger at the bar, making out with him in the elevator before coming to her senses and leaving.Back at the scene, Aria and Hannah frantically search for Lucas’s car. The tracks in the mud show that someone who knows what they did drove off in the car. At Spencer’s barn, Emily arrives with Elliot’s bag just as Spencer calls her telling her that she is too drunk to carry out her part of the plan. As Aria and Hannah continue to search for the car, Mona shows up returning the car.

Back at the scene, Aria and Hannah frantically search for Lucas’s car. The tracks in the mud show that someone who knows what they did drove off in the car. At Spencer’s barn, Emily arrives with Elliot’s bag just as Spencer calls her telling her that she is too drunk to carry out her part of the plan. As Aria and Hannah continue to search for the car, Mona shows up returning the car.

Mona tells Aria and Hannah that she started tracking Elliot after she became suspicious about Allison’s rapidly deteriorating condition. After putting a tracker on his car, she followed him out into the woods. Mona took the car to get the windshield of the car replaced. She surprises the others by asking where Elliot’s burner phone is.

Emily retrieves Spencer from Radley and confronts her about letting the others down. Spencer admits that she couldn’t handle the realization that the A nightmare had begun again and now, after Elliot’s death, the situation is worse than ever.

The girls and Mona have brunch the next day at Radley, where they discuss Elliot’s burner phone. Mona says she will try to ping the phone in order to locate it and discover with whom Elliot was working. Spencer continues to insist that the person on the other end of the phone was Mary Drake. Suddenly, the Liars’ old nemesis, Jenna Marshall, appears in the lobby.Jenna, who is back in town for Toby’s engagement, approaches the girls and wastes no time in dropping hints that she knows what the girls have been up to. Hannah again unsuccessfully tries to repair her friendship with Spencer. Hannah advises Spencer to tell Caleb the truth about the events of the previous evening.

Jenna, who is back in town for Toby’s engagement, approaches the girls and wastes no time in dropping hints that she knows what the girls have been up to. Hannah again unsuccessfully tries to repair her friendship with Spencer. Hannah advises Spencer to tell Caleb the truth about the events of the previous evening.

Jenna goes to see Toby at the station, saying she wants to make amends. Meanwhile, Mona tells Hannah that she is unable to track the burner phone. Hannah confesses her guilty feelings to Mona, admitting that she had time to stop the car but chose to run over Elliot because of what he did to her after the kidnapping. She also tells Mona about ending her engagement to Jordan. Hannah realizes that she lost her bracelet inside Elliot’s car, leaving a traceable link from his death straight to her.

Emily and Aria return to Welby to find Toby and other officers there. Toby demands that the girls come with him for questioning. Returning to the barn, Spencer finds that Caleb has left. Mary Drake visits Allison, telling her that she is the one in charge now. Meanwhile, Toby gathers the girls together and tells them that Elliot has been dead for 15 years: the real Dr. Rollins was 72 years old when he died of a stroke. The girls are stunned and now have no idea whose body is in the grave they dug.

Mona breaks into Elliot’s car and Hannah retrieves her bracelet. They find the burner phone inside ringing. Mona answers it and discovers Jenna on the other line.