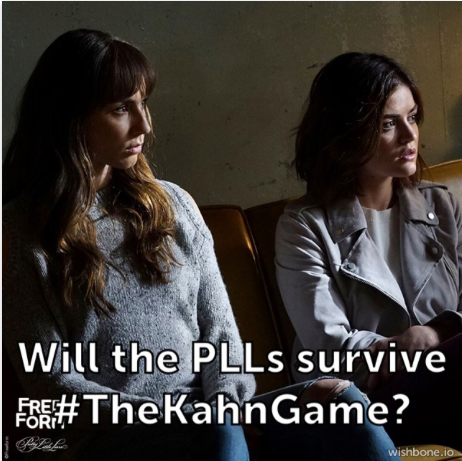 Pretty Little Liars returns to ABC Family tonight with an all new Tuesday August 16, season 7 episode 8 called “Exes and OMGs” and we have your Pretty Little Liars recap below. On tonight’s episode, Emily’s (Shay Mitchell) up for a position as swim coach at Rosewood High, but her ex-Paige is also in the running for the job.

On the last episode, Jason returned to Rosewood to warn Ali not to trust Mary. Meanwhile, the ladies made a discovery about Mary and Mrs. DiLaurentis that lead them to a storm cellar; Ezra got a call about someone from his past; and Noel Kahn became a prime suspect. Did you watch the last episode? If you missed it, we have a full and detailed Pretty Little Liars recap right here for you.

On tonight’s episode as per the ABC Family synopsis, “Emily’s up for a position as swim coach at Rosewood High, but her ex Paige is also in the running for the job. Meanwhile, Hanna has a vision the ladies are in danger; the gals locate the doctor who delivered Mary’s baby; and Ali returns to work.”

The season 7 episode 8 of PRETTY LITTLE LIARS is going to be really exciting and check out our live Pretty Little Liars recap down below!

Tonight’s episode of “Pretty Little Liars” picks up after two major twists were revealed in last week’s episode: Charlotte had a biological brother or sister and Ezra’s lost girlfriend Nicole may still be alive.

The Liars begin this episode by reviewing what they know so far: Noel Kahn stole Mary Drake’s file (injuring Toby’s girlfriend Yvonne in the process), then hid the file in Jenna’s room before placing a call to someone name Dr. Cochran. Noel is now the girls’ lead suspect for A.D.’s true identity. The girls ask Alison what she thinks: Alison agrees that she once trusted Noel, but only until she discovered that he was only helping her as a way to spy on her for Charlotte. When the girls question Alison what she had over Noel back when he helped her escape, she reveals that at the frat party the girls attended back in their freshman year, Noel pushed a girl down the stairs. His family paid off the girl and Alison believes that reporting him to the police now is not an option.

Hanna becomes upset because the others are not taking Noel seriously as the new A.D. As she walks away Caleb follows and the two are arguing when suddenly a car driven by Noel pulls up and hits Caleb. It is then revealed that the scene was just Hanna’s nightmare. To make sure Caleb is truly fine, she goes to see him and the two discuss their progress on the case: they are still trying to crack the DNA code in Mary Drake’s file and Jenna hasn’t made any suspicious moves. Meanwhile, Aria vents to Emily about Nicole reemergence and her guilt over deleting her call. As she is telling Emily that she lied to Ezra, he walked in and she confesses to deleting the call.

Ezra tells her that the convoy which kidnapped Nicole was spotted and the military is going after them to see if she is still alive. Emily then has coffee with Alison who tells her that she is going back to teaching today. Emily fears that Alison is going back too soon, but Alison is out of money thanks to Archer/Elliot and has no choice but to go back to work. Principal Hackett runs into Emily and encourages her to apply for the position of swim coach at the high school.

Spencer finds Dr. Cochran’s name in Mary Drake’s file: since the doctor’s address is in Brookhaven, she and Aria decide to try to track him or her down. Back at work, Alison sees a classroom full of kids in black hoodies and becomes ill. Afterwards, she and Emily discuss Principal Hackett’s suggestion to Emily that she apply for swim coach. Alison encourages her to apply for the job. Emily blames herself for advising Aria to delete the call from Nicole, and begins to hatch a plan to help Aria.

Meanwhile, Aria and Spencer go to find Dr. Cochran and instead find his daughter, who says that he was an ob-gyn who lost his license years ago. She says that she doesn’t know where her father is and hasn’t spoken to him in years. She gives them an ominous warning to stay away from Dr. Cochran. Back at Ezra’s apartment, Emily confesses to him that she was the one who convinced Aria to delete Nicole’s call from his cell phone. Ezra however, does not understand Aria’s motives and says he needs time to think everything through.

Hanna has flashbacks of her time being tortured by A.D. and suddenly, Mrs. Grunwald appears at her door. She tells Hanna she had a dream that there was a darkness around her and Caleb and asks if the two of them are alright. Meanwhile, Dr. Cochran’s daughter calls Spencer and accuses her of having someone ransack her office. She gives Spencer an address of her father’s last known whereabouts and tells her to bring a bottle of whiskey if she wants him to cooperate. At the Radley, Hanna speaks to Mrs. Grunwald about what has been happening with A.D.

Meanwhile, Alison teaches her class and one student calls her out about her past. Back at the Radley, Mrs. Grunwald continues to warn her that she is in danger but can only tell her that the source of the danger is close. Noel Kahn approaches, asking her if she has taken any country drives lately. She reaches out and touches Hanna, sharing in her flashback of torture from A.D., causing her nose to begin bleeding. Noel leaves, calling them freaks.

Principal Hackett calls Alison to his office and asks how she is after the prank that her students played. He questions whether she made the right choice returning back to work so quickly. She spies a filing cabinet with information about the Class of 2012 and, with an eye on the cabinet, tells Hackett that she made the right decision. Meanwhile, Hanna calls the girls together to tell them about her interaction with Grunwald and tries to convince them that Noel is A.D.

Spencer and Aria then go to see Dr. Cochran who tells them that he used to be an on-call doctor at Radley: he said that his job was to make babies that were problems go away. He says that he gave one of the babies, a boy, to Mary’s sister. A few years later, Mary became pregnant again and the child was put into the temporary custody of children’s services. He could not remember whether the child was a boy or a girl. He tells them to give his daughter a message: she can’t run from family.

Emily goes to the high school to apply for the coaching job and sees Paige who is also applying. The two go out to catch up and it is revealed that the reason they broke up is because Emily was a mess after her dad died. Paige tells Emily that instead of being in the Olympics, she was in a car accident which prevented her from training. Back at the school, Alison breaks in to Hackett’s office and searches Noel’s file to find a single page with a warning message for her friends.

Meanwhile, Ezra is glued to the news waiting for news of Nicole. Aria cashed in their tickets to Italy and bought him a plane ticket to go back to Colombia to try to find Nicole.

Alison shows the note from Noel’s file to the other girls. Seeing the note causes Hanna to have another flashback and she leaves the others. She makes a call to someone unknown, telling them that the deal is on: she will give them money in exchange for keys and then the other person is to forget her name. She goes to see Caleb and tells him that she is going to New York for a few days. Ezra goes to the airport to fly to Cambodia to find Nicole. Paige sees Emily and Sabrina together. Spencer goes through a family photo album while Hanna is shown taping up the windows of an unknown location.