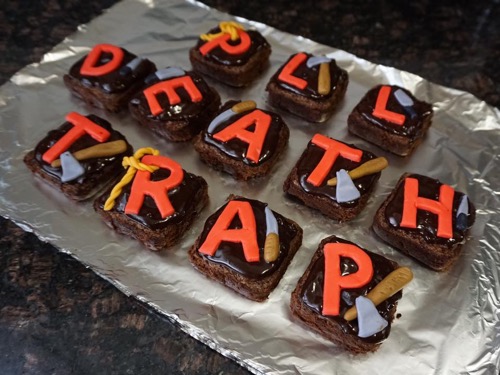 Pretty Little Liars returns to ABC Family tonight with an all new Tuesday, August 30, season 7 episode 10 called “The Darkest Knight” and we have your Pretty Little Liars recap below. On tonight’s episode, the ladies engage in an altercation against old foes that ends fatally.

On the last episode, one of the ladies went rogue to find proof that Noel Kahn was Uber A, while the others searched for evidence to back her theory. Meanwhile, Emily turned to Paige for comfort; and Jason and Aria teamed up to uncover the truth behind Mary’s past.

On tonight’s episode and Pretty Little Liars recap as per the ABC Family synopsis, “the ladies engage in an altercation against old foes that ends fatally. Meanwhile, one liar learns a secret about her past; and another gal makes a discovery about her future.”

The season 7 episode 10 of PRETTY LITTLE LIARS is going to be really exciting and check out our live Pretty Little Liars recap down below!

The girls are trying to figure out what to do with Hannah who has gone rogue. They call her phone but she isn’t picking up. Aria warns them all that Noel is out there somewhere and he might have Hannah.

What they don’t realize is that Hannah has Noel tied to a chair. She wants the truth. She threatens him with a knife while a camera on a tripod captures the moment.She cuts him, letting blood fall to the floor that is covered with plastic.

She cuts him, letting blood fall to the floor that is covered with plastic.

The girls call the police. Taylor shows up, he’s worried about Spencer. The cops questioned Jenna.
Next thing the girls know is that Hannah is on the TV, she’s a missing person.

Hannah heads to a lab with DNA. She is looking for results.

Jenna doesn’t know where Noel is. Ezra calls Aria. She wants to pick him up from the airport, but he wants to take a cab.

Hannah makes a call to an unknown person asking them to come meet her, she needs their help.

We find out that the other person on the phone is Mona. She tells Hanna That Noel was working with Charlotte.

Hanna wants Noel to held accountable, she is going to prove that he is AD. Hanna just needs 10 more hours.

Terry won’t let the girls leave the house until they find Noel.

Hanna and Mona come up with a great story to tell everyone. Hanna shows up at the house to see the girls and tells them and Reynolds that she went on a mini trip to do some research. She’s sorry she worried them.

Meanwhile, Noel is still tied up and being held hostage.

Caleb keeps asking Hanna if she is ok. He wants an answer that he believes. Caleb won’t leave her house, he wants to make sure she is safe.

In a rant, Caleb confesses that he wants to spend the rest of his life with her.

Allison shares that she is pregnant with Archer’s baby. She feels completely alone and scared. She doesn’t know what to do.

Reynolds shows up to tell Spencer that he is on the night shift. He wants to share dinner with her.

Hanna and Caleb are also having a romantic night. He kisses her scares on her back.

Aria is scared after hours pass and Ezra has not come home from the airport. She turns on the TV to see that Nicole Gordon has been found!

Spencer goes to visit Toby to tell him that she is happy that he found love. He deserves it. He wants her to find the same.

Before she leaves, Spencer asks him if she can kiss him to say goodbye – one last time.

Allison and Em spent the night on the couch and awake to voices outside. Someone is talking to the police that is watching the house. It’s Page. She wants to know if she slept at Ally’s.

Page is mad that Em won’t let her in the house. Page thinks that Ally is controlling Em again.

The lab calls Hanna back. The results were not a match.

She sends a group text to the girls to share the news. It looks like Noel isn’t Marry’s second child.
She wants them to help her with Noel who is tied up to a chair.

They think there is still a possibility that Noel is AD. To do it, they need to sneak by the cops. They manage to do so. When they arrive, Noel is gone with the camera.

They get a text with a meeting time. They can get the camera back if they show.

Caleb and Mona head out to spy on Sidney, who gives them drinks, compliments of marshall.

Toby is sad about leaving. He wants to know who bought the house.

He starts to text Soencer a goodbye, but changes his mind.

The girls go to the meeting place, an old abandoned school. A voice comes over the intercom. They need to leave the thumb drive on the table in exchange for the camera.

They enter a room where they are a bunch of baby dolls with the camera. While leaving, they see an eery scene – something that looks like a garage sale only Tim Burton would have.

A creaking noise alerts them to Noel behind them. He isn’t willing to let them go – they know too much.
Noel is angry and a little crazy. He pulls out an axe while Sidney is on the other end of the place with a gun.

Sidney turns off the lights. Ally, Spencer and Em try to dodge Noel on their end. He lunges at them with the aze, but they push him, the axe goes flying. It spikes the floor, he falls on it and is decapitated.

Sidney closes in on them. She manages to shoot Spencer. Unaware, the girls run. Mary comes out of nowhere. She holds Spencer as she bleeds out, telling Spencer that she is her mother. The girls come in to hear the admission and are in shock.

Meanwhile, Toby has crashed his truck. The scene is gruesome. Could he be dead?

Sidney is also in some trouble after she is thrown into a truck but the person she believe is the AD.