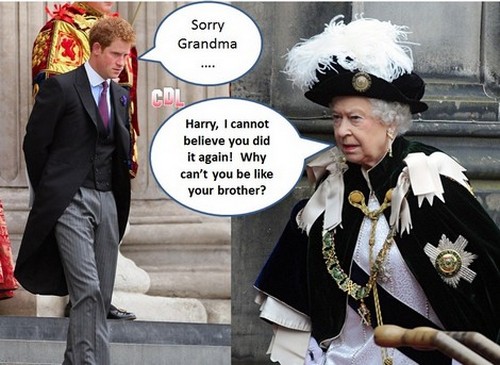 Prince Harry’s dating life is back in the headlines again. This time around there’s speculation that Prince Harry and Athina Onassis are dating, which is clearly going to send shock waves through Buckingham Palace.

Prince Harry has long insisted that he’s not desperately looking for a girlfriend, even though he would love to settle down and start a family just like his brother Prince William and Kate Middleton. Well, now it looks like Prince Harry might be dating Greek heiress Athina Onassis, who is the daughter of Greek tycoon Aristotle Onassis.

The brunette beauty has her fair share of drama in her life as she just went through a heartbreaking divorce with her ex-husband, Brazilian Alvarao de Miranda Neto. Athina Onassis’ security team caught her husband cheating on her with the blonde sister of an international equestrian in their Wellington, Florida home.

Sources close to Prince Harry and Athina Onassis say the young royal has been giving the Greek heiress his shoulder to cry on as they’ve quickly realized they have a lot more in common than their royal upbringing and celebrity status.

Apparently Prince Harry and Athina Onassis have been friends for years as one source dished, “He may have no shortage of female admirers, but Prince Harry appears to be a sucker for a damsel in distress – providing a shoulder to cry on for his pal Athina Onassis in the wake of her heartbreaking marriage split. Harry has known Athina for years. She’s a regular in the international equestrian set and they have lots of mutual friends.”

Surely, Athina Onassis doesn’t have marriage on her mind just yet, but there’s no doubt that Prince Harry is feeling pressured to not only find ‘the one’ but settle down just like his older brother. Athina Onassis seems like the perfect candidate, as she not only comes from a wealthy Greek background, but she’s also used to the scrutiny that comes with living a life in the public spotlight, unlike someone like Kate Middleton who is still having a hard time dealing with her critics.

Now, this isn’t to say that Prince Harry and Athina Onassis will beat Pippa Middleton and James Matthews down the aisle anytime soon, but they would definitely steal the spotlight from them, should they come out as a couple. And that wouldn’t be good news for someone like Pippa Middleton, who doesn’t want anyone stealing her thunder right now, especially since she’s planning her long-awaited wedding.

Tell us CDL readers, what do you think? Come back to CDL for all your Royal news and gossip!