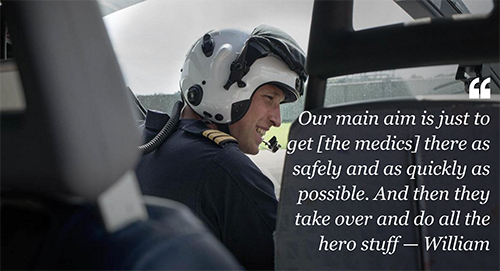 Is Prince William using his job as an air ambulance pilot in yet another attempt to rehab his tarnished reputation? BBC Futures put together a special presentation online that highlights the exhausting details of the Duke of Cambridge’s duties as part of an air ambulance team.

BBC Futures followed Prince William and the other medics on the future King’s air ambulance team for two days. The men and women of the East Anglian Air Ambulance trauma team often see some of the worst emergencies in England.

Kate Middleton and Prince William have been called the laziest Royal couple in history. The BBC Futures presentation reveals that this may not be the case. William reportedly spends only 20 hours per month working as an air ambulance pilot. But from the looks of it those 20 hours can be quite traumatic.

What did William have to say about the time spent with his team? The Duke of Cambridge stated, “I look forward to coming here every day, whether it’s 5:30am or going to bed at 2am. The shift work is exciting.”

Prince William told BBC Futures that there’s a certain satisfaction involved in the important work done as an air ambulance pilot. “That’s something my other job doesn’t necessarily do.” The presentation goes on to detail the work done by all members of the East Anglian Air Ambulance team.

BBC Futures did a wonderful job bringing awareness to the importance of the East Anglian Air Ambulance trauma team. But it does make one wonder, did the Kensington Palace PR machine exaggerate the role Prince William plays on the team?

The documentary states that of the 2,000 or more ambulance calls per day in East Anglia, the air ambulance medical team is needed in approximately 1% of those critical care emergencies. According to the number provided, that is about 1,507 trauma flights per year.

If William is working only 20 hours per month, and that is being generous, the prince hasn’t flown as many emergency flights as Kensington Palace would like us to believe.

While Prince William’s East Anglia trauma team is responding to nearly over 1,500 critical medical calls per year, he and Kate Middleton are jetting off and enjoying private vacations in France, enjoying the last days of summer at Balmoral with Queen Elizabeth and Carole Middleton and carrying out a few Royal responsibilities here and there.

While William is waiting to be King, perhaps he should fly a few more missions per year. Is it really necessary to send Prince William and Kate Middleton off for a Royal tour of Canada this Autumn? Wouldn’t the prince’s time be better spent working as an air ambulance pilot and saving lives?

“It’s effectively bringing a hospital to the casualty” – The Duke on the role of the @EastAngliAirAmb #NAAW2016 pic.twitter.com/zQDnvRJs4r

The Duke feels privileged to work with the Air Ambulance Service #NAAW2016 pic.twitter.com/0GM9XUAlgy