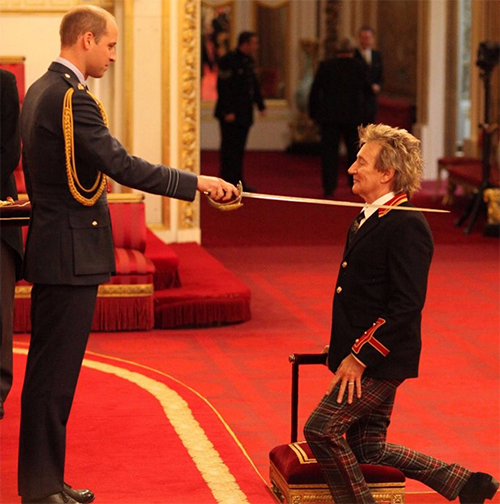 Queen Elizabeth’s decision for Prince William to knight Rod Stewart was perceived as odd by many. If someone other than Queen Elizabeth is going to bestow a knighthood, then shouldn’t it be Prince Charles? Is this a silent signal that Her Majesty does not think the Prince of Wales is fit to be King?

It is probably a big to do over nothing, but Royal watchers did take note that Rod Stewart knelt before the second-in-line and not the heir to the throne to receive his knightship. Maybe Rod, even at 71, can relate to William more so than the fuddy-duddy Prince Charles.

Certainly Rod’s wife, Penny Lancaster, 45, has more in common with the younger Royals than stuffy Camilla Parker-Bowles. Penny and Rod’s children – Aiden, 10, and Alastair, 5 – are young enough to be Charles and Camilla’s grandchildren.

Of course, it could be that Camilla demanded Charles stand up to Queen Elizabeth and refuse to knight the rock and roll icon. Perhaps Camilla is offended by the fact that a Penny Lancaster has such a common job as a weekly hostess on the British talk show ‘Loose Women’.

Kate Middleton was sent off to the Netherlands for meetings with mental health and addiction specialists at The Hague the day Prince William knighted Rod Stewart. There’s another embarrassment Queen Elizabeth was able to hide away for the day.

Kate missed out on an opportunity for yet another photo op with Prince George and Princess Charlotte. After being knighted, Rod Stewart and Penny Lancaster’s boys could have enjoyed a little playdate with Kate Middleton and Prince William’s children.

We all know how much Kate Middleton enjoys rubbing elbows with glamorous movie stars and musicians. The Duchess of Cambridge missed out on all the fun, as Rod and Penny met with Queen Elizabeth at Buckingham Palace following the ceremony. Not only is Prince Charles an embarrassment and not fit to be King, the constitutional legality of his marriage to Camilla Parker-Bowles has always been in question.

If Charles continues to insist that Camilla be crowned Queen when the Prince of Wales is crowned King he may find himself in the midst of a challenge to the current Laws of Succession. What do you think of this recent knighthood? Leave your thoughts in the comments section below and keep checking CDL for all your royal news and updates!