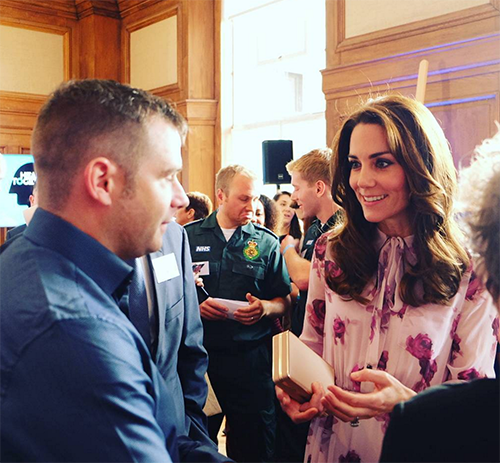 According to Britain’s The Telegraph, Kate Middleton’s soft diplomacy – which includes smiling, waving and greeting diplomats in the latest and most stylish couture – might be a thing of the past. She’s now expected to step it up when it comes to her royal visits. She’s expected to embark on her first solo trip without her husband Prince William to The Hague, where she will meet with King Willem-Alexander along with a scheduled mental health conference and community project event in Rotterdam.

One source close to a British ambassador who has ties with the royal family spoke about how the stakes are high for Britain post-Brexit by saying, “We need to start beefing up our bilateral relationships with EU countries. Those links need to become stronger and the Royal family is a very potent force in that exercise. It would not surprise me if we see more trips to Europe by members of the Royal family because there are 27 countries and we will want to let them know that we haven’t left the scene.”

While there have been reports suggesting that Prince William was against Brexit while Queen Elizabeth was very pro-Brexit, there’s very little chance that sending Kate Middleton on more solo trips throughout Europe will do anything for the British government, let alone the monarchy itself. The Duchess of Cambridge has shown very little interest in any foreign affairs, apart from what holiday destinations she would like to visit on her next luxurious getaway with Prince William and their two children, Prince George, and Princess Charlotte. Plus, critics who have been following Kate’s royal career since she married Prince William five years ago know that the last thing she wants to do is speak in front of an audience let alone state one of her opinions.

Many of her critics will agree that Kate Middleton is more of a celebrity than a diplomat, and for Queen Elizabeth to send her as a ‘potent force’ in highly doubtful, as she would bring more embarrassment to the royal family with her lack of knowledge in most areas of diplomacy than anything else. She hasn’t been a potent force for Britain while in the EU, and she certainly won’t be with them out. Do you agree, CDL readers?

Come back to CDL for all your royal news and updates!

The Duchess of Cambridge hears about the support available for those who find themselves providing mental health first aid for someone in their lives. #WorldMentalHealthDay

Today The Duke and Duchess of Cambridge and Prince Harry are celebrating #WorldMentalHealthDay with @heads_together. This year’s theme focuses on mental health first aid and the role everyone can play in supporting friends and family.