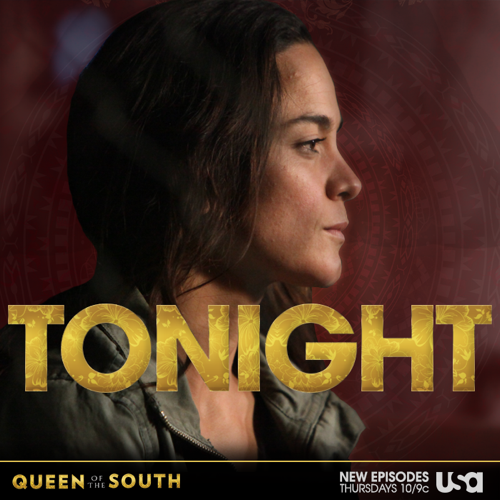 Queen of the South airs on the USA network tonight with an all new Thursday, July 28, season 1 episode 6 called, “El Engaño Como La Regla,” and we’ve got your Queen of the South recap down below! On this evening’s episode, Camila, (Adriana Barraza) who’s deep in debt and short on supply, contemplates giving up Teresa. (Alice Braga)

On the last episode, Teresa advanced her plans after witnessing a horrific incident; and Brenda, who’s safely in Dallas, began assembling a team to help her sell drugs. Did you watch the last episode? We’ve got your detailed Queen of the South recap right here.

On tonight’s episode per the USA synopsis “Camila, who’s deep in debt and short on supply, contemplates giving up Teresa; and Brenda’s drug enterprise causes problems between her and Tony.”

Tonight’s episode of “Queen of the South” begins with Teresa making friends with a new mule. The new mule explains that her current situation is only temporary and that she is going to California to be an actress. Teresa’s future self again appears to show her the way of the world, pointing out that the woman is just lying to herself in order to survive.

Camila is confronted by one of her people over the lack of supply. He tells her that Eric has reached out, offering to supply him with the inventory he needs to keep his customers happy. Camila is furious, as Eric works for a rival cartel. She warns that once word gets out that the cartel is trying to move in on her turf, bad things will happen. Camila calls Cesar to check on the status of her delayed shipment, and Cesar repeats Epifanio’s lie that the Feds are holding up the delivery of the drugs. Both deliver thinly veiled threats: Cesar threatens that he is the one with the knowledge of what she is really doing behind Epifanio’s back while Camila threatens a nasty outcome if Cesar is playing both sides of the game.

Brenda breaks the news to Teresa that she has started her own drug business as a way to get her and Tony out of the mess that they are in. Teresa goes out for a delivery to an upscale house to deliver to a man. The man offers Teresa a large monthly cash bonus in exchange for her putting him at the top of her distribution list in the event of a cocaine shortage. To Teresa’s delight, the man turns out to be an immigration lawyer and the two discuss obtaining immigration papers with fake names for herself, Brenda and Tony.

James also confronts Camila about the late shipment, saying his dealers and customers are getting impatient. Camila reassures James that she has contacted Reynaldo to confirm that the shipment is arriving later today and is merely waiting for his reply. He tells her that there are rumors swirling that changes are coming because Epifanio is running for governor: other cartels are no longer taking them seriously and the cartel that Eric works for is going to start making more aggressive moves to take over Dallas. James asks Camila if he can take out Eric but she will not give him the go ahead. She receives confirmation from Reynaldo that she will have the new shipment later today and tells James to be on the scene to receive it personally. As Teresa leaves the lawyer’s house, Camila calls her and tells her that she has a more important job for her and needs her immediately. Back at the club, Camila tells Teresa that she needs her to go on a shipment run with James.

On their way to the shipment site, James and Teresa discuss the murdered man at Eric’s house. James again tells her that this is her world now and she can’t let dark things bother her. Teresa continues to hold her position that she does not want to be the kind of person that murders or allows other people to be murdered when she can prevent it. He tells her that she will adapt to living in the darkness because there is no way out of it.

Meanwhile, Camila calls Epifanio to tell him that Eric and his cartel are making moves to take over Dallas. She asks Epifanio’s permission to take care of Eric and whatever is necessary to protect her business. Epifanio refuses to give permission and again asks if Camila has any knowledge of Teresa’s whereabouts, making it clear that he would be much more willing to help her with her territorial and supply problems if she made more progress getting him Teresa and Brenda. After the call, Epifanio tells Cesar that he tipped off the DEA about Camila’s shipment that is being delivered today.

In a parking garage at the site of the delivery, Teresa and James wait. As the shipment is being delivered, Teresa spies suspicious men hiding in the corner, alerting her that something is about to go wrong. The man who led Teresa and James to the site hands Teresa a gun, seconds before the DEA shows up and a shootout ensues. Teresa and James are able to escape the parking garage but the entire shipment is seized and all of Reynaldo’s men are dead. Fleeing from agents on the ground and in helicopters, Teresa and James split up and run for their lives. Teresa is able to hide herself in a group of tourists and then make her way back to their vehicle and drive off, while James jumps onto a trolley. Teresa calls James so she can pick him up, but James tells her to go to the warehouse without him. Instead, Teresa circles back and picks him up and the two head back to the warehouse together.

Meanwhile, Tony is at the local YMCA, waiting for Brenda to pick him up. Brenda had asked Teresa to pick him up earlier while the two were on the phone, but Teresa was unable to because she was on her way to the lawyer’s house to make a delivery. Brenda tells Tony to take the bus home, while she handles bagging up her product. On the way back to the warehouse, Teresa pulls over to get some air, telling James that she helped him out of the darkness. As they rest, Camila calls James, demanding to know what happened after seeing the DEA shootout on the local news. He tells her that he is on his way back to the warehouse now, and Teresa decides to walk home. Cesar tells Epifanio that the DEA bust was successful.

As Teresa walks home, she notices again a group of presumably Mexican immigrants disembarking from a van outside a church. She goes into the church and asks the priest about the people and the priest denies that they are immigrants. She tells the priest that she has family that she needs to bring from Mexico as well as something very important that she left behind. The priest again denies that they are immigrants. While leaving the church, she receives a text message from Brenda saying that Tony is missing. Camila speaks to the man who approached her earlier about the lack of supply to tell him that the shipment has been seized and the man says he is going to use Eric until Camila is back on her feet.

James meets his girlfriend Kim at a restaurant and tells her that she needs to go away for awhile in order to stay safe from the fallout of the DEA bust. He then meets with Camila at the club, telling her that a mole must have tipped off the Feds. He worries about Colombian retaliation once they realize they just lost a five million dollar shipment. She tells James that Epifanio is sending her a shipment this evening. James is uncertain about relying on Epifanio and suggests making a move on Eric. One of her other men suggests selling Teresa to Epifanio for five million dollars and using the money to settle up with the Colombians. Meanwhile, Teresa goes to Brenda’s motel to find out where Tony is. Tony returns home and has a fight with Brenda over her lifestyle. Teresa intercedes and forces the two to reconcile, though she is worried about Tony’s involvement in this lifestyle.