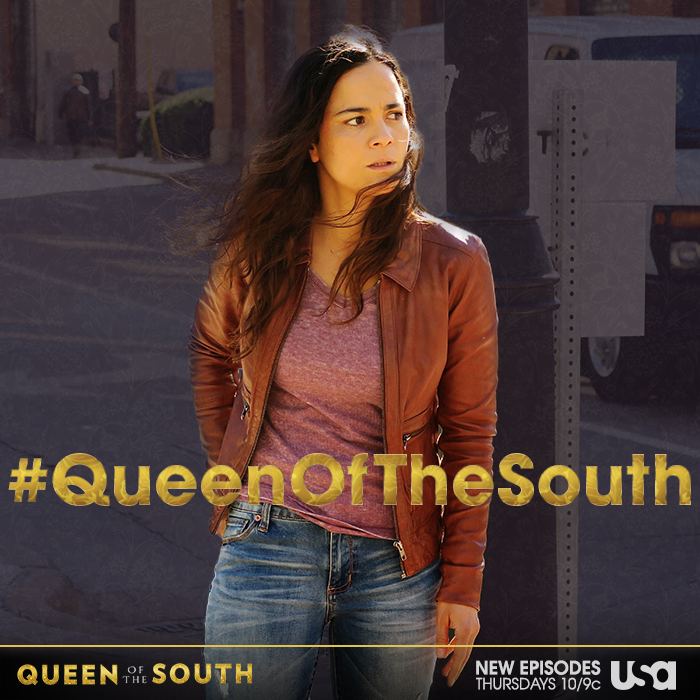 Queen of the South airs on the USA network tonight with an all new Thursday, August 11, season 1 episode 8 called, “Billete De Magia,” and we’ve got your Queen of the South recap down below! On this evening’s episode, Camila attempts a risky heist.

On the last episode, Camila sent Teresa on a dangerous mission; and Brenda, facing a supply shortage, put her crew in the line of fire. Did you watch the last episode? We’ve got your detailed Queen of the South recap right here.

On tonight’s episode per the USA synopsis “Camila attempts a risky heist; and Teresa is forced to make a life-changing decision while undercover.”

Tonight’s episode of “Queen of the South” begins with Camila and James telling Teresa about the planned heist of the men in Florida, where they plan to turn $2.5 million into the $5 million they owe the Colombians. Camila tells Teresa that she is leverage for her against Epifanio and if Teresa dies on this job, they all lose. She drives off with James to meet the men. They go to a house where a group of men are torturing another. James questions his wife about the hotel where she works and what the security is like, telling her that if she tells anyone they were there he will come back for her and her child.

Meanwhile, Brenda and her men are cooking meth at the hotel. She reminisces about her luxurious life in Mexico and worries about her financial situation while trying to raise her son alone.

Teresa and James go to meet the men from Florida as their plane lands. James gives her a tracker and a gun. Camila calls Cesar and confronts him about her recent string of bad luck ever since she offered Cesar a part of her business. Cesar tells her that if he had turned and told Epifanio everything, she would be dead. Camila says she thinks Epifanio also had something to do with her shipments being seized in order to ruin her business and force her to go back to him in Mexico. She warns Cesar to watch his back before hanging up.

James takes surveillance photos of the Florida men as they check into their hotel, while Teresa waits in the lobby. James calls the men and tries to set up a location to discuss their deal, but the men insist that they will pick a location when they are ready. Teresa follows the men upstairs to get their room number then ducks into a room that a maid is cleaning. She pulls her gun and forces the maid onto the floor, photographing her badge and tying her up. She calls James to give them the room number and he tells her she needs to find the black suitcase. She has the maid take off her uniform to use as a disguise.

She takes the woman’s cart of supplies and goes to the men’s room to plant the tracker. She goes into the room with the towels and leaves them in the room, putting the tracker on the black suitcase. The men go to the hotel bar and are approached by another man who warns him that if he does a deal with Camila then he is going to cause problems with the people who run this territory. The man calls James to tell him about the man that threatened them, as that man gets into James’s car, revealing he is one of Camila’s men. James tries to calm the Florida men down. Teresa goes back to the room where she had the maid tied up, but the woman is gone. She finds the woman in the bathroom attempting to hack through her ties, screaming and crying that the cartel already killed her brother. Teresa tries to reassure the woman.

Meanwhile, Brenda sets up buyers for the product as one of her men causes an accidental explosion, catching himself on fire. The Florida men take the black suitcase and meet up with James. One of James’s men tests the product while James shows the men the cash. The two exchange the drugs for the cash and the Florida men leave. In another part of the city, Camila meets with Teo and he tells her that the purchase went through. She tells him that, because she suspects Epifanio is interfering with her business, to use one of his colleague’s names to refile the purchase documents. Teo refuses but Camila insists, saying that if Epifanio discovers he is helping her, his life is at risk.

James calls Camila to tell her that the first part of the operation is complete. He starts following the suitcase tracker and calls ahead to some of his people. They pull up in cars surrounding the car of the Florida men and blow up their car, stealing the black suitcase. One of the men sees James’s face before escaping. James calls Teresa and tells her to hide in the man’s room and if he shows up to keep him there; he tells her that because the man has seen her face he can’t be allowed to live. The man returns to the hotel wounded, entering his room where Teresa is hiding. She pulls her gun on the man and tells him to leave and she will cover for him. The man refuses and says that he isn’t going to kill her; instead he is going to let her live so she can go back to the others to tell them that he is coming for all of them.

As the man lunges for his gun, Teresa fatally shoots him. She flees as the police respond to the sound of gunshots in the hotel and James tries to navigate his men out of the city without detection. Teresa takes off on foot as Brenda tries to call her. Tony arrives back at the hotel telling her that there are police everywhere because of the explosion. Meanwhile James picks up Teresa and she tells him that she killed the man who saw his face. Teresa sees her future self in the back of the car, smiling.