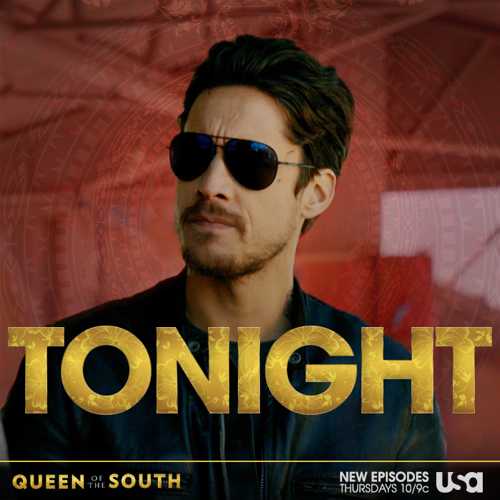 Queen of the South airs on the USA network tonight with an all new Thursday, August 18, season 1 episode 9 called, “Coge Todo Lo Que Puede Llevar,” and we’ve got your Queen of the South recap down below! On this evening’s episode, Teresa (Alice Braga) tries to save a witness to the heist.

On the last episode, Camila attempted a risky heist; and Teresa was forced to make a life-changing decision while undercover. Did you watch the last episode? We’ve got your detailed Queen of the South recap right here.

On tonight’s episode per the USA synopsis, “Teresa tries to save a witness to the heist; and a confident Camila vows that she’s back in business and is done with Epifanio.”

After the events from last week, it seemingly began to feel like Camila Vargas was losing control over everything and everyone. Most especially Teresa! Camila had a man down because he had gotten shot and urgently needed actually medical care instead of what they could barely give him however, her most pressing matter was Teresa because Teresa didn’t follow orders. Teresa was told to break in and take additionally, precautions with the maid that she had tied up. So what Camila and James both wanted her to do was to take a picture of the maid’s ID and scare the other woman into silence by making her believe that Teresa’s people could always find her. Yet, Teresa didn’t do that.

Teresa felt that the picture and even roughing up the maid would be too much. So she chose to ignore what James had warned her about and that meant there was a witness that could identify her in a robbery gone bad. Technically it was only supposed to be a robbery so Teresa had explained that she didn’t think she should go overboard with scaring the maid. But the robbery quickly turned into a homicide when Teresa hadn’t been given much choice and had to shoot someone before they could shoot her.

So while Teresa saw what she did as kindness and more than enough, Camila and James were later forced into cleaning up after her. Camila set her people to look for the maid and handled the woman. However, the maid ended up being a minor problem compared to Leon. Leon was the brother of the people they had hit last week so Leon was coming town because he wanted revenge. Leon had called James to ask what happened with his brothers and naturally James had denied all part in their deaths. And even claimed that he was just finding out about what happened through Leon.

Leon though wasn’t really sure about anyone. So James warned Camila that the brother coming to town and afterwards he tried talking to Teresa. Teresa was still shaken up after having killed someone so James had tried to tell her something comforting about how that wasn’t on her. Yet, Teresa felt that it was and eventually left the guys at their hideout while they were still operating on one of their own because she needed to get away. And once she was in the car, she called Brenda and asked for a favor.

Camila on the other hand, tried to repair her business. Camila had gone to Allen’s and had made a deal with him to offload her coke. However, she did have a nasty run-in with Eric at Allen’s. Eric had been planning offloading his coke as well so he hadn’t liked getting cut out of a deal. So Eric had warned Allen that he was betting on the wrong horse and he had left, but it didn’t seem like he was happy with letting go of Camila’s territory. Even after she warned him that he should go back to Texas and forget all about pushing her out.

But surprisingly Teresa hadn’t gone off somewhere to hide. She had actually tracked down the maid whose name was Maria Sanchez and she had convinced Maria that she needed to leave town with her son. Teresa told Maria that some people were going to come looking for her and that the only safe place she could go was back home to Mexico. Maria however, had escaped such a place because she wanted to give her son a better life and raise him away from the cartels. So it was tough on her and her son when they realized that they had to leave and could never come back to the States yet they did as Teresa advised them to do and they packed in a hurry which turned out to be fortunate.

James had quickly showed up at Maria’s place after his friend on the force handed over her information and would have killed her. James had apparently met up with Leon as soon as the other man landed. So Leon had told him that he was looking for the maid because she could have seen something and would be able to help him track down his brothers’ killers so that conversation had sealed Maria’s fate. James knew that he had to kill her to cover up what Camila had ordered. Yet, when he showed up at Maria’s place and didn’t find her, he began asking questions and was even willing to threaten her neighbors until they told him what they saw.

They saw Maria flee with her son and mentioned that she had been with a woman. A woman matching Teresa’s description. So right away James knew that Teresa was up to something and he used the tracker on her car to see where she was going. Though James didn’t notify Camila. She had called him and asked for an update so he told her that he was trying to trace Maria although Camila ended up asking him for something else while he allegedly “waited” around. Camila had wanted James to set up a meeting with Leon and she didn’t tell him why she wanted that particular meeting.

So James had no idea that Camila was planning on using Leon to her own advantage. Camila knew that Leon wanted blood for what happened to his brothers so she gave him a name. She told him that she couldn’t’ be directly involved because of an accord she has with the Jimenez Cartel, but that the man he was looking for was called Eric Watson. She mentioned that Eric went by the nickname “Birdman” and that he had powerful friends. However, the friends part didn’t deter Leon and so Camila got she wanted from that meeting.

She had set a potential enemy against a known an enemy. But was left in the dark about Teresa and what was actually happening with the maid. Teresa had taken Maria and her son Angel to Father Ramon and she had asked him to help her smuggle the two back into Mexico. So Teresa was doing her best to safeguard Maria and Angel and that’s also why she wasn’t using her own car. Teresa was using Brenda car which was the favor that she had asked for. And so the car that James was following turned out to be a towed vehicle.

James though had still tried to get to the maid by simply calling Teresa directly and had tried to change her mind after she answered. Yet, it was too late for that. Teresa said that she wasn’t going to be handing over the maid and then she told Brenda that she was going to Mexico with Maria an Angel. So Teresa’s plan was to find what she had hidden in Mexico and what she knew would keep her safe, but she had betrayed Camila and knew that was going to cost her.

Although, funnily enough, Teresa wasn’t Camila’s only problem. That Leon guy had gotten caught and had revealed, under torture, that it had been Camila that told him Eric killed his brothers. So Eric now knows that she tried to take him out and where she had gotten her coke. And so a cartel war might just break out and undo everything that she had tried to set in motion.