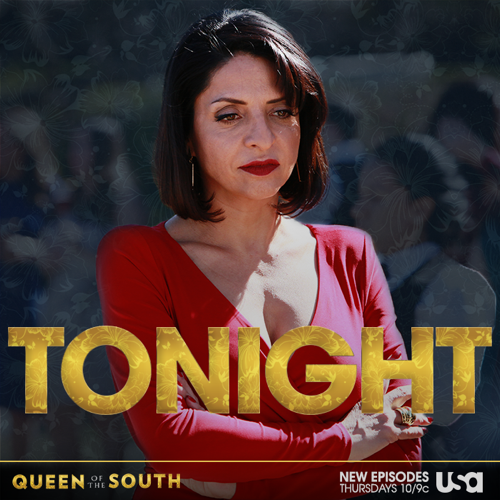 Queen of the South airs on the USA network tonight with an all new Thursday, August 25, season 1 episode 10 called, “Esta ‘Cosa’ Que Es Nuestra,” and we’ve got your Queen of the South recap down below! On this evening’s episode, Camila (Adriana Barraza) returns to Mexico in order to protect herself; James (Peter Gadiot ) hunts Teres.

On the last episode, Teresa tried to save a witness to the heist; and a confident Camila vowed that she’s back in business and was done with Epifanio. Did you watch the last episode? We’ve got your detailed Queen of the South recap right here.

On tonight’s episode as per the USA synopsis “Camila returns to Mexico in order to protect herself; James hunts Teresa and Teresa faces danger while taking Maria through the tunnel to Mexico.”

Camila was paying the price for playing her little game with the Birdman. She had tried to kill him by framing him for a crime she committed yet Eric managed to evade the man she set after him and he informed his more powerful friends about what happened. So now it was common knowledge that Camila tried to break an alliance with a rival cartel on tonight’s episode of “Queen of the South” and for some reason her husband Epifanio thought he should intervene before things could get any worse.

Epifanio was running for governor of the Free and Sovereign State of Sinaloa so he couldn’t afford a cartel war that involved family members and apparently there was also a sentimental reason for why he didn’t want Camila to get hurt in the fallout. He said he didn’t want to have to explain Camila’s death to his daughter.

But ordering Camila to meet him in person was something she suspected would happen. So Camila made plans to meet with Epifano however she told her people to carry on with business and had asked them to notify her the second they heard back from James. James was supposedly out there still looking for the maid so no one wanted to pull him away from that yet what they didn’t know was that James had no way of getting to the maid because Maria had already escaped to Mexico with both her son as well as Teresa.

Teresa hadn’t wanted to let the innocent woman die because of something she did so she had found a way to take her to Mexico and was going to leave her with family.

At least that was the plan anyway, but Teresa hadn’t been counting on Maria Sanchez’s family carrying a grudge. Maria’s family in Mexico had wanted answers from Teresa. Like who does she work for and why were they coming after Maria?

So they had ended up taking Teresa hostage to extract those answers and, despite getting them, they didn’t truly want to let her go. Maria’s family unfortunately had some history with the cartels that ended with a death of a family member so they didn’t want to let Teresa go because they were scared she would go back to her boss and mentioned what happened to Maria. Although, the odds were unlikely seeing as she did betray her boss to protect Maria in the first place.

Maria’s family though refused to believe Teresa wasn’t like the others. They just assumed that Teresa would break under pressure if she was ever found by someone else in the Vargas Cartel so they wanted to kill her. Yet, Maria and her son for that matter saw how wrong that was. They tried to explain that Teresa helped them and that she shouldn’t die for that however Maria’s father was apparently still bitter about what happened to his son.

It seems that it was Maria’s brother that died all those years ago after getting mixed up with the cartel and, by the way her father was acting, her brother’s death hadn’t been quick or easy. So when Maria’s father said that he was going to protect his daughter and grandson, what he really meant was that he was going to kill Teresa and that nothing his daughter said would convince him otherwise.

So Teresa decided to risk it and make a run for it by pretending to need the bathroom that conveniently had a window. However, there were plenty of people looking for Teresa that guaranteed she wouldn’t able to get very far. Maria’s brothers were looking for her and James was using every possible resource at his disposal to track her last movements. Camila on the other hand was “enjoying” a visit with her husband.

Epifanio who had claimed to be worried about Camila’s well-being hadn’t bothered all that much to see how she was faring before he jumped on her and made up for old times’ sake. And it was when he was finished playing the good husband, that Epifanio asked Camila about Teresa.

Epifanio wanted Teresa dead and apparently he also had men looking for her as well. So what Epifanio wanted from Camila was cooperation. He had asked Camila if she had seen Teresa and surprisingly Camila decided to be honest with him. Camila admitted to knowing where Teresa was and she said that Teresa worked for her. Thereby implying that Teresa was now off-limits.

But at that time Camila hadn’t known that Teresa betrayed her or that James was working his way through Brenda’s friends to find Brenda What Camila did know however was that her sudden timing in Mexican lined up perfectly with an event that Epifanio was hosting and that her husband’s campaign manager had said having her around was good for Epifanio’s image.

It appears that Epifanio being a family man was something the people of Sinaloa liked to see. So Epifanio was working an angle with his wife and she knew it even as he did later ask Camila to stick around in order to play happy families. However, Epifanio also dealt with a few things for Camila. He had talked to Jimenez Cartel and had called what his wife did unfortunate yet he made sure that there wouldn’t be any repercussions over what happened with Eric.

Therefore, Camila was safe and she’d continued to be safe as long as she agreed to a deal with her husband because sadly Epifanio didn’t just want Camila back. He also wanted Teresa to be turned over to him.

Though Teresa had found that book she was looking for in Mexico and ultimately Maria’s father had allowed her to go back to the states without being harassed. So Teresa had found the “leverage” she believed would keep her alive although she still needed translate it into something she could understand and she had to make peace with James.

James had covered for her with Camila and later he even lied to Camila when he reported back that the maid was dead in order to spare Teresa’s life. And so thanks to James, Teresa wasn’t in trouble with Camila nor did she give the other woman an excuse to hand her over to Epifanio.

Only the agreement that Camila had come to with her husband after everything was said and done was that she would stay away from Eric yet she told James the second she was back in Texas that she wanted the Birdman dead and it doesn’t seem like she’s going let anyone tell her what she can or cannot do!