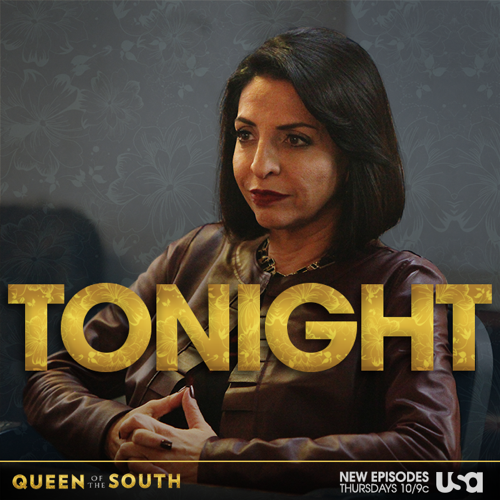 Queen of the South airs on the USA network tonight with an all new Thursday, August 4, season 1 episode 7 called, “El Hombre Pájaro,” and we’ve got your Queen of the South recap down below! On this evening’s episode, Camila (Adriana Barraza) sends Teresa (Alice Braga) on a dangerous mission.

On the last episode, Camila, who was in deep in debt and short on supply, contemplated giving up Teresa; and Brenda’s drug enterprise causing problems between her and Tony. Did you watch the last episode? We’ve got your detailed Queen of the South recap right here.

On tonight’s episode per the USA synopsis “Camila sends Teresa on a dangerous mission; and Brenda, facing a supply shortage, puts her crew in the line of fire.”

Tonight’s episode of “Queen of the South” begins with Camila trying to minimize the fallout to her business after the disastrous DEA bust and her general lack of product. She confronts one of her customers for buying product from Eric, the “Birdman,” behind her back; he is unabashed and says he will discuss working with her again when she has her business under control. Back at the warehouse, Camila’s men likewise try to calm their customers. Meanwhile, Teresa tends to one of the other mules is sick. She is given the name of a doctor and goes to get the girl medicine.

James talks to Camila about taking out Eric. She calls Epifanio about the status of her shipment who tells her the shipment crossed the border last night. Camila tells Epifanio that she needs even more drugs so she can compete with the 90% pure product that Eric is providing. She tells Epifanio to get the clearance for her to kill Eric today. Epifanio again tries to convince her to give up her business in Texas and come home. After they hang up, Epifanio tells Edgar to make sure the DEA again intercepts Camila’s shipment. Camila tells James that she needs him to personally escort the shipment to the warehouse to make sure nothing happens to it.

At the pharmacy, Teresa again runs into the priest from the church. He tells her that when she first approached him, she was a stranger and, afraid that she might be ICE, he lied about being able to help her get to Mexico to retrieve the notebook. He says that there may be a way for him to help her and agrees to stay in touch. After she leaves the pharmacy with the girl’s medication, she lies to James saying she is still waiting and heads to visit the immigration attorney that she sold product to earlier this month. She tells the attorney that she wants immigration papers so she can disappear. She asks for papers for her, Brenda and Tony. He tells her it will cost $30,000 each. Teresa visits Brenda at her hotel and tells her about getting the papers and asks her for pictures of herself and Tony for the passports.

Meanwhile, James and another of Camila’s men are driving to meet up with the shipment when they see the Feds have already pulled the truck over. Epifanio calls Camila to confront her about the stopped shipment and says that one of her people has turned traitor. She asks for another shipment and he tells her he will try. Camila checks the warehouse cameras and notices Teresa missing and begins to suspect her of being the traitor.

Back at the warehouse, Teresa returns and gives the medicine to the sick girl. Camila speaks to her daughter Isabella and the two discuss their relationship. Camila sends for Teresa and confronts her about her absence today. When Teresa explains that she went to the pharmacy, Camila tells her that she must have gone somewhere else because her odometer shows she traveled farther. Teresa says that she also stopped to get food and Camila demands to see a receipt for her lunch, which Teresa provides. Camila then reminds Teresa that she saved her life but warns her against doing anything behind her back. Camila also tells her that if the DEA tries to turn her to come to her immediately. Camila asks James if he believes Teresa and he says that she hides a lot, but he doesn’t think she is working with the DEA. He suggests that they get product from a group that has 25 kilos in order to assuage their more vocal and influential customers. She tells James that she has set up a meeting with the Colombians in order to get more product.

Camila meets a representative for the Colombians about another shipment. He tells her that she already owes $5 million and until she gets Epifanio to pay them for the shipment she already lost, she will not receive another one. She refuses to involve Epifanio. The man tells her she has three days to pay or he will contact Epifanio personally. She then tells James to go and retrieve all the money they have in reserve and to take Teresa with him. Teresa and James go to a cemetery to retrieve the money. James pries a secret panel off of a grave and grabs the duffel bag of cash inside. As the two are driving away, a car begins tailing them and another pulls in front of them and a man jumps out of the car and points a machine gun at their car. Other men with guns join him and they all shoot up the car. While Teresa and James are trapped inside, the men steal some of the money, $2.5 million. James shoots one of them and Teresa notices that the man’s tattoo is the same as the one she saw on one of Eric’s bodyguards when she was at his house for the party. The two return to the warehouse and tell Camila that Eric has her money. James urges her to call Epifanio but Camila says that if Epifanio finds out she was trying to purchase product from the Colombians, they would have another war on their hands.

Camila places a call to her attorney, Teo, but he tells his secretary to take a message and instead speaks to one of the controlling members of his law firm who confronts him about his work with Camila. He tells Teo that because he is representing Camila, his other clients are now asking for different lawyers. Teo tells his boss that the work he is doing for Camila is legal but his boss says that he is going to assign his clients to other attorneys in the firm and encourages him to stop representing Camila. Epifanio receives a call from Eric, telling him that they stole half the money and killed one of Camila’s men. Eric asks if they went too far and Epifanio tells him to keep going.

Back at her hotel room, one of Brenda’s men has been beaten up by a customer because they have stomped on the product so much that the customers have started to notice. She says that they need to start selling crystal meth instead of coke. Epifanio calls Camila to reminisce about their marriage, trying to repair some of the damage between them. An emotional Camila tells him good night and hangs up. At the warehouse, Teresa’s future self-warns her that time will not be on her side much longer. When she returns to the bunker, she checks on the sick girl who is doing better. Camila speaks to James about the people in Florida he mentioned earlier who had 25 kilos and says they need their product. When James asks Camila how they are going to get the product now that their money has been stolen, she tells him that they are going to steal all the drugs the men have.