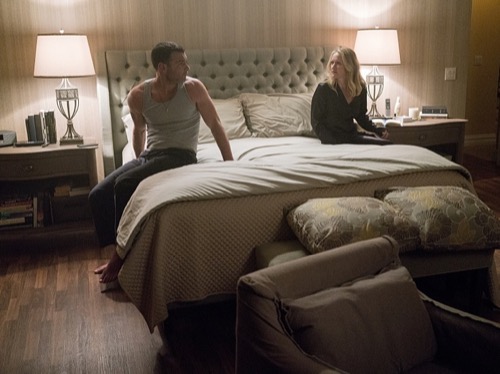 Tonight on Showtime the highly entertaining show Ray Donovan returns with an all new Sunday, June 26, season 4 premiere called “Girl With Guitar” and we have your weekly Ray  [Liev Schrieber]  Donovan recap below. On tonight’s episode, season 4 begins with Ray in recovery mode in the aftermath of the shootout and trying to reconnect with his family.

On the last episode with Jeannie back at K&A, Marty and the Pod consulted for a new company trying an unconventional management style. Did you watch the last episode? If you missed it, we have a full and detailed recap right here for you.

On tonight’s episode as per the Showtime synopsis, “season 4 begins with Ray in recovery mode in the aftermath of the shootout and trying to reconnect with his family and repair his relationship with Bridget. Meanwhile, Bunchy and Teresa face impending parenthood together; Abby receives a medical diagnosis that threatens to upend the Donovan family; and Mickey plots a heist as Det. Muncie closes in on his hiding place in Nevada.”

Tonight’s episode of Ray Donovan kicks off with Ray at what appears to be an AA meeting – He’s 6 months sober. It’s his turn to speak – they ask him how he wound up there, Ray remembers being shot, and Father Romero reading to him from the bible while he was recuperating at the church.

While Ray was bandaged up and hiding out at the church after being shot, he was looked after by a boxer named Hector Campos. After the shooting and the dead Armenians, Hector was employed by Father Romero to help him get back on his feet and keep him away from his family so that he is not arrested.

After the AA meeting, Ray heads to the bathroom to get himself together. Hector congratulates him on finally speaking at the group meeting for the first time. Ray awkwardly thanks him for everything he has done for him.

After the meeting, Muncie summons Ray to “talk.” Muncie tells Ray that she has his father’s DNA from the crime scene and it is only a matter of time before she gets a subpoena for his DNA. She wants to know where Ray’s father is – he tells her that he still doesn’t where he is, he is gone, and Ray hopes to hell that he never comes back.

Meanwhile, Ray’s dad Mickey Donovan is living the good life and hiding out in Primm. He’s working at a bar called Buffalo Bill’s and going by the name of Chip – and of course he is up to no good.

After his meeting, Ray calls Abby Donovan, she lies and tells him that she is at the grocery store – but really she is at the doctor’s office getting a mammogram.
He tells her that he dropped Terry off at the church, today is the big day and Terry finds out whether or not he was accepted to be a missionary in Brazil. Abby just learned that she has breast cancer – she’s stage zero, and baffled by the diagnosis. She heads outside to smoke a cigarette and contemplates whether or not she will get her breasts removed like the doctors recommended.

Ray is determined to get his whole family back together, he tracks down his daughter Bridget, who is not thrilled to see him. Ray tells her that Abby misses her and Terry might be going away for a few years – it’s time for her to come home and see the family. Bridget is suspicious, but Ray reassures her that he is “better now” and she reluctantly agrees to come home for one dinner.

A lawyer named Jacob tracks down Ray, he says that he represents Sonia Kovitzky. Jacob is vague, he won’t tell Ray what Sonia wants, but hands him a check for $10,000 and tells him to stop by at the gallery.

Abby heads to the church to pick up Terry, he’s freaking out, they denied his application and he isn’t allowed to go on the mission. The church told him that it is because he hasn’t been with the church long enough, but he knows that they are just blowing him off because of his Parkinson’s Disease.

Curiosity gets the best of Ray and he heads to Sonia’s gallery, she shows him a painting of a young girl playing a guitar. Sonia wants to talk about Muncie. She was trying to smuggle in artwork for a client to avoid taxes, but Muncie nabbed the art at the port. Sonia needs the art back, it’s not her’s, it’s a client’s.

She wants Ray to speak to Muncie and try to bribe her on Sonia’s behalf to get the art back. Ray doesn’t want anything to do with it – he gives Sonia back her check for $10,000 and leaves.

At the casino bar where Mickey is working, he has quite a racket going on. Whenever a rich out-of-towner comes inside, he drugs them at the bar, and then has a protistute lure them up to a hotel room where he robs them. The owner of the casino, Buffalo Bill, is on to Mickey/Chip. He ran his social security number and knows that it was a fake name. He fire Mickey and tells him that he is barred from the premises. Mickey is upset after he is fired and heads back to his trailer and does some Peyote.

Hector calls Ray sobbing, he tells him that he screwed up…BAD. Ray rushes to the motel where Hector called him from, there’s a cop car in the parking lot. Ray fids Hector pacing outside with a gun, and there is a cop tied up and gagged in the bathroom. Apparently, Hector was fooling around with a girl and the cop showed up so he freaked out and knocked him out and tied him up. Ray calls Lena and has her run the cop’s license number, all she finds is a DWI from years ago.
Ray heads to the store and buys some liquor and then he tells Hector to go home. He sits down with the cop and pours two glasses – one for himself and one for the cop, who’s name is Vincent. Ray downs the drink and he and the cop start throwing back drinks, and get wasted.

Meanwhile, Bridget arrives at the house for dinner, and everyone is there…except Ray. They all sit down at the table and wait for him. Abby is a weepy mess, but no one knows that she has cancer.

Mickey’s Peyote trip isn’t going well, he’s hallucinating and swears that he sees his daughter, he follows her to the casino that he just got kicked out of. It’s not long before security finds him trying to convince the house singer to more to Boston with him. They beat him up and throw him out again. Mickey starts running down the road in the middle of the night. The police arrive and arrest him, then he passes out.

Ray tosses drunk Vince in his cop car and starts driving. Ray tells Vincent that in 6 weeks, an associate will show up at his house and give him $50,000 after he gets out of rehab. Vincent laughs and says he isn’t going to rehab, then Ray drives his car in to a brick wall, it looks like poor Vincent is going to get another DWI. Ray leaves him passed out in the car and puts him in the driver’s seat and then he limps away.

Ray heads to Hector’s house – still drunk. Hector’s phone is blowing up. He says the woman from the hotel room keeps texting him and saying that she is going to kill him, apparently he tried to break it off with her, and she won’t let him. Hector confesses to Ray that Marisol is his half-sister. He breaks down and tells Ray that after he was molested by the priest – he started sleeping with his sister, she was the first woman that treated him right. That’s why Hector freaked out on the cop and tried to keep him quiet – the last thing he wants is for people to know about him and Marisol.

Ray is obviously disturbed. He heads home, and he is still drunk. Everyone is waiting at the table for him. Bridget jumps up and hugs him and thanks him for the painting. Sonia sent her the $60,000 Girl With A Guitar painting. Ray sits down at the table and starts crying and tells them that he loves them all so much.

Mickey wakes up in the hospital and Muncie is staring at him…she finally found him.