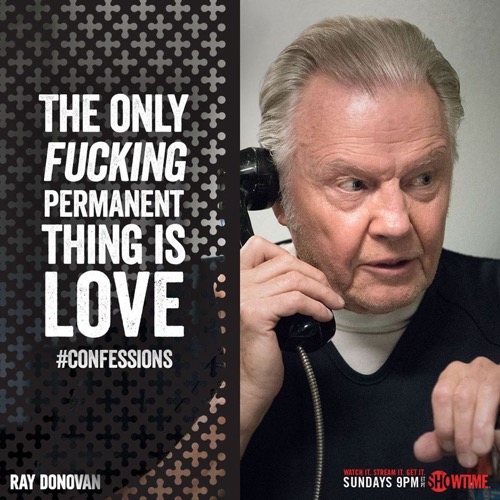 Tonight on Showtime the highly entertaining show Ray Donovan returns with an all new Sunday, August 7, season 4 episode 7 called “Norman Saves the World” and we have your weekly Ray Donovan recap below. On tonight’s episode, Ray (Liev Schreiber) confronts and unexpected scandal.

On the last episode, Ray waited to see if Belikov would be released from prison and struggled with the prospect of putting a pimp back out on the street. Later, Art dealer Sonia Kovitsky invited Ray to a breast cancer benefit where he encountered some former clients and became more entrenched in her operation. Meanwhile, Teresa spiraled into a postpartum depression; and Mickey tried to persuade the DA that he was the sole architect behind the Minassian massacre. Did you watch the last episode? We’ve got your detailed Ray Donovan recap right here.

On tonight’s episode as per the Showtime synopsis, “a long buried scandal leads Ray to an unexpected confrontation.”

Tonight’s episode of Ray Donovan kicks off with a very angry woman hiring a hitman and giving him a photo of Mickey Donovan. He leaves and harasses some cops so that they arrest him and send him to jail.
Meanwhile, Ray Donovan heads to a music studio where Ed Cochran is recording an album of cover songs.

The studio recorder tells Ed that he can’t have his music until he pays his $12,000 bill. Luckily,Ray shows up with a bag of cash. Apparently, he is paying Ed to help him get Mickey out of prison. Ed is helping Ray orchestrate getting Mickey transferred to a special home for homosexuals.

After their meeting, Ray heads to the prison to check in on Mickey – he’s looking at 120 years in prison. Ray tells Mickey that he needs him to memorize some interview questions to get moved to a different facility because the Russians aren’t protecting him anymore. Mickey isn’t too thrilled about pretending to be gay, but Ray says he has no choice if he wants to live.

Hector has been training at the gym with Daryl and Terry. He apparently thinks that Daryl is his new personal assistant. He sends Daryl to go pick up his sister/girlfriend Marisol, she just got kicked out of rehab again.

In prison, Mickey is working in the kitchen. The hitman that was hired to come after him goes through the food line. Mickey can tell that something is strange about him. He starts begging one of the guards to put him in the gay wing because he is tired of being harassed. Meanwhile, Ray is tying up loose ends. He tells Terry that he is going to get a phone call from the prison, he has to tell them that Mickey is gay. Terry is totally weirded out, Bunch thinks it is funny and says that Mickey did stuff with a guy when he was in jail before and Mickey is actually proud of it.

Daryl is busy chauffeuring Hector’s sister Marisol around town. She leaves him in the car and runs in to a house. After what seems like forever, Marisol finally comes out and she is high as a kite. She demands that Daryl take her to see Hector.

Ed meets up with Ray, he has some files from the FBI. Ed wants to talk about a woman named Fiona Miller. Apparently, a heavy hitter named Radley stabbed her to death. Ed has solid evidence proving that Radley murdered her. He takes the evidence to the DA and tries to barter with him. Ed hands him Radley on a silver platter in exchange for getting Mickey off the hook for the Menassian shootings. The DA finally agrees because taking down Radley would be huge for his career.

Mickey nails his prison interview to see whether or not he is really gay. Bunchy gets a phone call from the prison to ask whether or not Mickey is gay, then they call Terry too. Abby overhears them on the phone and is baffled. Afterward, Bunch asks Abby to take care of Maria, he wants the baby to stay at her house full-time while he is training Hector.

Ray is working on getting the evidence for the DA to put away Radley. He meets with Radley’s agent, a guy named Nick Lowe, apparently Nick is the one that paid off people to cover up Fiona Miller’s death. Ray convinces Nick to take a meeting with Tommy Wheeler, he lies and says that Tommy is looking for a new agent.

Ed and Ray corner Nick Lowe, they tell him that if he wants Tommy Wheeler as a client, then he has to give up Radley. Nick knows where Fiona Miller’s dead body was hidden – they rough him up a bit, then Ed decides to torture him by drowning him with a wet towel. Finally, Nick gives up the name of the guy that got rid of Fiona’s body, it was Ezra Goldman.

Daryl brings Marisol to the gym to see Hector, he’s in the middle of a press conference. Of course, Marisol is causing a scene and Hector is upset that Daryl let her get high. Hector takes Marisol aside and tells her she needs to leave ASAP. She whines that she doesn’t have anywhere to go and wants to be with him. Hector screams at her to leave, and then curses Daryl out too.

Mickey is in danger in prison. His cellmate that he was pretending to have sex with passed away, so he got assigned a new roommate…the hit man that was hired to kill him. The hit man already poisoned his cellmate and killed him, Mickey’s time is running out.

Ed Cochran is double-crossing Ray Donovan. He meets with Radley and offers to get rid of Fiona’s body before Ray finds it for $5 Million. Radley sends Ed to an abandoned restaurant and tells him the body is there. Then he sends Marty to the restaurant to kill Ed and make the whole problem disappear.

Ray figures out what Ed is up to and follows him to the restaurant. When Ray arrives, Ed and Marty have both been shot by each other. Marty confesses that Fiona Miller’s body is hidden in the drywall at the restaurant. Ray tells Ed to call DA Holt and tell him where the body is.

Tonight’s episode ends at the prison, Mickey’s transfer finally goes through and he is transferred to the gay wing, just in the nick of time.