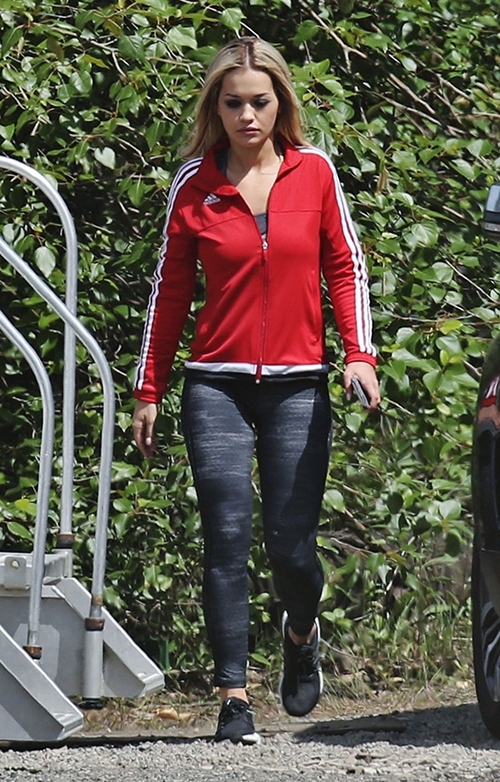 How close is Rita Ora with her new Fifty Shades co-stars? Rita Ora was spotted in Vancouver filming ’Fifty Shades Darker’ on May 31. The newest addition to the steamy movie series was filming scenes with Eric Johnson, Dakota Johnson, and Jamie Dornan – in a sports bra!

Rita Ora joined the cast of the franchise earlier this year as Mia Grey, the younger sister of Jamie Dornan’s Christian Grey. Rumor has it that Rita Ora won’t be getting a whole lot of screen time in ‘Fifty Shades Darker,’ but she will have a bigger presence in the installment after this one.

Fans of the steamy book series were thrilled when Rita Ora joined the cast – and general consensus on social media is that she fits the role of Mia Grey perfectly. The ‘Fifty Shades’ cast is equally thrilled to have her on board … especially Anastasia portrayer Dakota Johnson.

Dakota Johnson and Rita Ora have been bombarding social media with photos and videos of them hanging out, and they are definitely “close.” One photo even featured Dakota planting a kiss on Rita.

The ‘Fifty Shades’ rumor mill has been in overdrive this week, and fans are convinced that Dakota and Rita are more than “just friends.” Seeing as how Rita has been linked to other girls romantically in the past, like Ellie Goulding and Cara Delevingne, it’s not too far fetched. Plus, you have to figure, when you are shooting a movie full of sex scenes like ‘Fifty Shades Darker,’ the chemistry on set must be palpable.

So ‘Fifty Shades’ fans, what do you think of Rita Ora joining the cast of the movie? Do you think she and her co-star Dakota Johnson might be “more than just friends?” Share your thoughts in the comments below and let us know what you think!