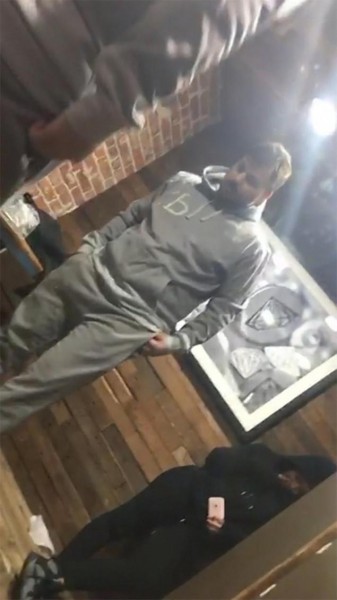 Rob Kardashian is slimming down and exercising under the watchful eye of Blac Chyna who has taken control of Rob’s life. Rob has lost a reported 40 pounds since he started dating Chyna in January. Has Chyna pushed Kim Kardashian and Kris Jenner out of Rob’s life?

Kim and Kris must find this infuriated that Chyna has been able to get Rob to exercise and eat healthy. Rob wouldn’t listen when Kris and Kim encouraged Rob to do the same thing.

Encouraged really isn’t the word to describe the way Kim Kardashian and Kris Jenner went about trying to help Rob get his weight under control. Bullied and ridiculed might be more appropriate words. Chyna has succeeded where the super divas failed.

Rob and Chyna recently went on a shopping trip at Diamond Supply Co. and posted a video on Snapchat. In the photos Rob is shown standing in front of a mirror dressed in a gray hoodie and gray sweatpants. Rob looks amazing, quite a transformation from a year ago when he was living as hermit and eating junk food all day long.

Chyna often posts videos that show the couple shopping for healthy foods and cooking low-carb meals. These changes were necessary because Rob was diagnosed with diabetes in December. It seems that not only has Rob’s health improved, his self-confidence has as well.

Khloe Kardashian has been encouraging Rob’s new lifestyle and has been there for him as much as possible. Kris, on the other hand, just checks in on Rob from time to time. Probably because the momager is worried Rob Kardashian and Blac Chyna will start spilling Kardashian family secrets.

Maybe Kris is jealous of Rob because she’s been packing on the pounds post-divorce. Allegedly Kim Kardashian has demanded Kris undergo lap band surgery in a desperate attempt to slim down and sober up.

Rob Kardashian is back in control of his own life with the help of Blac Chyna. Who knows, Rob could end up marrying Chyna and then he would be stepfather Kylie Jenner’s boyfriend Tyga’s son King Cairo. Wouldn’t that be interesting!