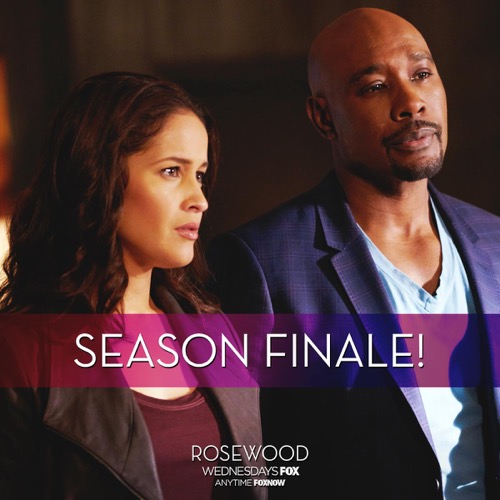 Tonight on FOX Rosewood airs with an all new Wednesday, May 25, season 1 finale called, “Badges & Bombshells” and we have your weekly recap below. On tonight’s episode, in the Season 1 finale, Rosewood and Villa may finally be able to reveal their true feelings for each other, but Rosewood’s discovery of some interesting evidence leads to his own private investigation without her knowledge.

On the last episode, Rosewood’s former girlfriend turned his world upside down when she needed his help locating a rich patient who vanished, but the discovery of the man’s body kicked off a bizarre murder investigation. Did you watch the last episode? If you missed it, we have a full and detailed recap right here for you.

On tonight’s episode as per the FOX synopsis, “in the Season 1 finale, Rosewood and Villa may finally be able to reveal their true feelings for each other, but Rosewood’s discovery of some interesting evidence leads to his own private investigation without her knowledge. Meanwhile, Rosewood and Pippy make assumptions about Donna’s love life; Pippy and TMI’s wedding is just around the corner; and Hornstock is haunted by a mistake from his past.”

Don’t forget to join us for our live recap tonight at 8:00 pm when Rosewood airs on Fox. While you wait for the recap, let us know how excited you are for the season 1 finale.

TMI and Pippy had actually talked about that infamous kiss on the last episode of “Rosewood”. However, Tara took most of the blame and had told her fiancée that the kiss between her and Mitchie had simply been a mistake. And she also added that it didn’t mean anything. So Pippy had taken what Tara said into consideration and she had told Tara that she was fine with what happened, but it didn’t appear that she was all that willing to move on.

In the weeks since the kiss happened, Pippy has merely pretended that she’s ok with having Mitchie around yet she also always seemed to be there whenever Mitchie tried to talk to Tara. So Pippy wasn’t in fact, capable of overlooking what happened and unfortunately Tara refused to see what was going on in the lead up to their wedding. But Mitchie on the other hand could sense that something was still up so he had tried to warn Tara about it in case Tara had to work through a couple of things before she married went ahead with Pippy.

Yet, a few things managed to get in the way before Pippy and Tara could talk things out again. Apparently a junior lawyer at a huge pharmaceutical company had been first drugged and then blown up. Joe Campos had been in and out of foster care his whole life however he decided to make something of himself when he became eighteen. So he went to college, graduated at the top of his class, and eventually became a lawyer at a billion dollar company. And so it hadn’t made sense why someone would go out of their way to ensure that he was dead, but that’s what happened.

Joe had been given a chemical to stop his heart. So he had already been dead by the time he had either gotten into the car or had been placed there. Though for some reason, someone blew up that car with him in it and that had left his remains scattered all over the place. And yet that didn’t necessarily ruin the evidence. Rosewood and his team were still able to perform an autopsy after they technically put Joe back together again and so they found out a lot of things about Joe.

Joe had had a prison tattoo and he must have gotten it while he was in juvie because he was never arrested later on in life. So Villa had gone to the judge that had last put him away and she had asked him if he could remember Joe Campos’s case. And luckily for her, he did. The judge could clearly recall a scrawny kid from little Havana that had been running a fake ID scam and he also remembered that Joe used to run around with this one friend in particular that never could stay out of trouble.

And what do you know that friend of his was still trouble. Joe’s friend Louie has been in and out of prison through all of his adult life and it turns out that Joe had mostly been the person to bail him out. So Joe had never given up on Louie and the two had remained in close contact right up until Joe was murdered, but Louie wasn’t much help for the police nor could he be considered a viable suspect. At least not while he was wearing an ankle bracelet that demanded he not leave the comforts of his own home.

But Villa ended up catching a break with another source. Villa had been looking into what Joe was doing in the days leading up to his murder and she ran into someone that claimed Joe’s boss Carla had been in contact. And that had upset Villa because Carla had claimed to barely even know Joe yet it seems that the two had been working on something. That Carla hadn’t wanted Andrew Ward to hear about.

Andrew Ward was the owner of Ward Pharmaceuticals and he was also both wealthy and influentially. So when Villa and Rosewood had later taken Andrew up on his offer to attend his office party, Villa had kept Andrew busy while Rosewood used the opportunity to talk to Carla alone. And Carla eventually admitted to Rosewood that she had known Joe was looking into some of Andrew’s old cases because he thought it was connected to a corrupt judge. Though the only judge that could across as corrupt was Judge Walters who was the same man that Villa had spoken with earlier.

Judge Walters had seemed like a good guy and Villa hadn’t questioned him all that hard. However, with Carla’s information, Villa and Rosewood thought about Joe’s last arrest and they wondered why a teenager had been given three years in a correctional facility when all he did was create fake IDs. So they took a look at how the judge could be connected with the judge and they found out that Andrew had started out in real estate. Which included owning a juvenile correctional center.

So that’s when it suddenly all made sense. The judge was collecting kickbacks in exchange for keeping the center full with kids and Joe must have found evidence of it if they had gone to additional lengths to ensure he was dead. Yet, nothing had been found on Joe when he died and Carla had also admitted that Joe had hidden the evidence with someone he trusted. And the only person that matched that description was Louie.

Louie who was so out of it that he hadn’t even realized that his friend had stashed something at his place. So Villa and Rosewood had to ransack Louie’s place themselves to find something, but someone began shooting not long after they found Joe’s flash drive. And so both Villa and Rosewood had to fight their way out of Louie’s place because the same person that had killed had been sent to stop them.

Only Andrew Ward’s plan didn’t work. Villa had actually gotten the drop on the hitman and so she was able to take him into custody. Where he was allowed sweat for a while until Rosewood had mentioned finding a cufflink at Joe’s crime scene and Hornstock was able to use that to force a confession out of the guy. But usually, Hornstock leaves the questioning to Villa so there had been a reason for why he had taken over with the hitman.

As it turns out the hitman had tried to blackmail Hornstock with something from his past. So Hornstock had to make a decision. He could either get justice for Joe Campos or he could lose everything he had worked for. And by allowing the hitman to go down, Hornstock had made his decision. He chose to do the right thing and hand over his badge himself.

And because of his sacrifice, Hornstock made sure that everyone involved with Joe’s death went down. Andrew Ward, the judge, and the man that had carried out all the dirty deeds. Yet, Hornstock’s shocking exit wasn’t the only thing to happen on tonight’s season finale.

Pippy and TMI had had their talk and Pippy had essentially broken things off with Pippy even though their wedding was right around the corner. However, while that may cause some issues at the office because Pippy said she could no longer work with Tara, the real shocker had been what Rosewood did. Rosewood had Mitchie take a second look at Villa’s husband Eddie’s autopsy and it revealed that Eddie had been murdered. So Rosewood had later tried to tell Villa that though she took what he said as him trying to stop their date.

That’s right! They had been close to finally sealing the deal and were just about to become something more with their first official date when Rosewood dropped such news on her. So she believed that the second autopsy had merely been his way of running from something they could have had. And that had upset her so much that she ended up telling him to stay out of her life. As in for good!