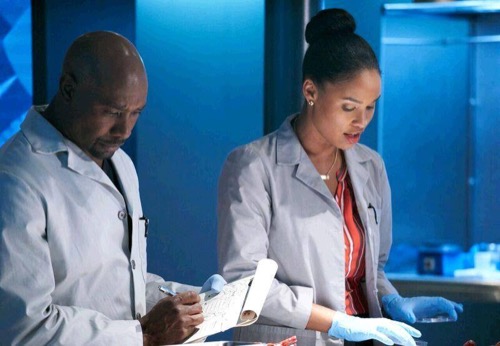 Tonight on FOX Rosewood airs with an all new Wednesday April 13, season 1 episode 16 called, “Dead Drops & Disentanglement” and we have your weekly recap below. On tonight’s episode a case hits close to home for Rosewood (Morris Chestnut) during the investigation of the suspicious death of a man whose condition mirrors his own.

On the last episode, while at an out-of-town forensic pathology convention, Rosewood unintentionally revealed the blueprint to commit the perfect murder during a speech to the convention attendees.  Did you watch the last episode? If you missed it, we have a full and detailed recap right here for you.

On tonight’s episode as per the FOX synopsis, “a case hits close to home for Rosewood during the investigation of the suspicious death of a man whose condition mirrors his own. Meanwhile, Donna and Erica clash over what they think is best for Rosewood; and Hornstock asks Villa for help reaching out to his estranged teen daughter, who happens to be a witness in the case.”

Villa and Rosewood have been on the outs lately. Apparently Villa had a house warming party and she practically invited everyone, but Rosewood. So Rosewood did what he normally does. He just showed up and tried to smooth talk his way into the party on tonight’s all new episode of “Rosewood”.

Only he didn’t think that Villa would quick him out because that’s exactly what she did. Villa had looked at Rosewood with his new jacket and new shirt and she had seen that he had only been stopping by for her when really he had gotten dressed for someone else. So Villa told her mother to make Rosewood a to-go plate and then Rosewood had been pushed out of the party.

And that had hurt Rosewood yet Villa had been right when she guessed that he had other plans. Rosewood and his cardiologist have finally crossed that line from just being doctor and patient. So the two have begun sleeping together and unfortunately she got to meet his mother before either of them had been ready for that. Though it could have been helped if Rosewood had remembered that his mother likes to stop by to make him some special tea for his heart.

So imagine Donna’s surprise to find out that not only had she walked in on something, but that her son was sleeping with his cardiologist that also told Donna that Rosewood wasn’t going to be drinking anymore of her special tea. It seems that while the tea strengthens Rosewood’s heart, Erica had come up with a new plan to help Rosewood and so she’s now has him on pomegranate juice. That she has deemed is more beneficial.

However, Rosewood didn’t want his mother to judge him so he told Donna to stay in his lane. Then he quietly fled the scene in order to invite himself onto another case. A base jumper had crashed landed on a parked car. And that parked car had belonged to Brody who happens to be dating Captain Hornstock’s daughter Sophie.

No need to guess why the car had been parked!

Only the medical examiner at the scene had said that Darrin Barber had died before he hit the car. So when Rosewood did arrive unannounced, he decided to test Darrin’s parachute. Which included a backup that he could have pulled if the first one failed. And he proved that Darrin had been murdered.

The parachute hadn’t been deployed, the backup parachute hadn’t been deployed, and so Darrin had been dead before he had gotten a chance to deploy what he needed not to crash. Though Rosewood would have probably have deduced something else as well however there was something about the victim that scared him. Darrin apparently had a scar down his chest like Rosewood’s so Rosewood knew that Darrin had probably been like him. Born premature and was forced to multiple surgeries throughout his childhood. So Darrin’s case ended up being the first one that Rosewood had ever walked away from.

And that had surprised everyone. Villa wasn’t used to Rosewood not pushing himself in on her investigation and even Hornstock had seemed concerned. It just hadn’t made sense for Rosewood to come down to the crime scene and then suddenly say he was busy with other things. So Villa had stopped by his office and basically she pushed him into working the case. She implied that if he wasn’t scared of dealing with someone so similar to him then he wouldn’t mind taking on Darrin’s case.

So Rosewood did take back his words from earlier and he decided to work the case back at his offices. Yet, what Rosewood hadn’t counted on was that both his mother and sister would be just as upset as he was by looking at Darrin. They had initially tried to be professional, but Rosewood could see the toll it was taking on them. And he had tried to reassure them each in their own way.

Donna though had needed more than a heart to heart with her son. So she had gone to Erica’s office and had spoken quite plainly with the other woman. She told Erica that her relationship with her patient affects everyone because it was Rosewood’s family that cared about his prognosis. As well as what happens to him if his cardiologist were to suddenly drop him as patient. Which could happen if things were to end badly between Donna and Erica.

And so Donna told Erica that she didn’t want to see her son lose the one cardiologist he had managed to trust. But later Rosewood hadn’t been happy to hear that Donna had paid Erica a visit. So he had tried to tell his mother that she had crossed a line and, not that surprisingly, she had ignored him.

Only Rosewood didn’t get the chance to get upset, at least not that very moment, because he had wanted to take part in his first ever stakeout.

The victim’s credit card had been used to make purchases after his death and so someone stole Darrin’s credit card. And that someone could have been the person that attacked him a good 48 hours before his death because that’s when Rosewood estimated the victim had experienced whiplash that ultimately killed him. So to find Darrin’s possible killer, Sophie told the detectives about a scam in which if you steal a credit card and then ship items to the address then the thief could pick up those things without drawing notice.

And so that’s how they found their homeless man. Greg had bought up a lot of coats in all different sizes and he had shipped them to Darrin’s place. Yet, Greg said he hadn’t stolen the credit card. He admitted that he had tried to and that Darrin had caught him in the act. So that’s when Darrin surprised him by letting Greg have the card as well as 500 dollars he withdrew from the ATM.

Apparently Darrin wanted Greg to pay it forward and so that’s what Greg had been doing with the shipments of coats. He said he was going to hand them out to the people at the shelter. And while Greg’s story sounded farfetched, surveillance video from the ATM showed that he had been telling the truth when he said that Darrin had given him those things.

But fortunately Greg hadn’t accidentally killed Darrin by causing him a whiplash. Rosewood had taken a second look at the victim and he had found a tumor. A tumor that had been mistaken for something else yet allowed for no one to be blamed.

And even though Donna had believed she was right, she had apologized to Rosewood. She had gone over to his place and actually said the words. Yet, Rosewood had new for her. He said he changed cardiologist because he wanted to see where things went with Erica on a personal level. So Donna had funnily enough put things into perspective for him.

So sometimes a parent can be right and others, such as Hornstock, have to figure out when to let go. And he has to do now that his daughter has told him she’s joining the police academy.