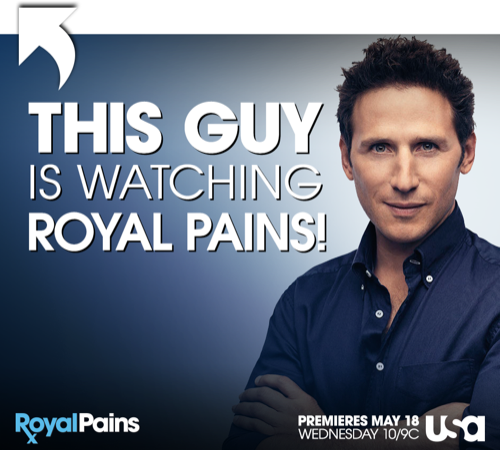 Tonight on USA Network ROYAL PAINS continues with an all new Tuesday, May 18 season 8 premiere called, “Stranger Danger.” We’ve got your recap down below! On tonight’s episode in the Season 8 premiere, Hank (Mark Feuerstein) treats a politician; Divya’s(Reshma Shetty)  future hits a roadblock

On the last episode, Hank (Mark Feuerstein) ran into his ex-fiance Nikki (guest star Maddie Jo Landers) and had a startling revelation. Did you watch the last episode? If you missed last week’s episode we have a full and detailed recap, right here for you.

On tonight’s episode per the USA Network synopsis “in the Season 8 premiere, Hank treats a politician; Divya’s future hits a roadblock; Jeremiah returns, but struggles with his first patient; and Eddie has a surprise that doesn’t elicit the expected reactions from Hank and Evan.”

Tonight’s episode looks like it is going to be great and you won’t want to miss it, so be sure to tune in for our live coverage of USA Network’s “Royal Pains” at 9:00 PM EST! While you wait for our recap hit the comments and let us know what you think about the eighth season of Royal Pains so far.

Eddie R. Lawson was back in town and it turns out he was getting married on tonight’s episode of “Royal Pains”.

Apparently Eddie had flown back to town at the first opportunity and in spite of a speaking engagement because he had wanted his sons to know that he was getting married to Ms. Newberg. And both Evan and Hank had been excited for him. The guys know and love their dad’s fiancée so they had no problem with their dad’s remarriage. Hank however did have a problem with Eddie suddenly wanting to marry his girlfriend two days after they got engaged. So he had tried to ask Eddie why the rush and he noticed that his father had tried to gloss over it as if it was just excitement.

So that had Hank left uncomfortable. He knew that there was more going on and he wanted to know what it was, but Evan hadn’t felt the same way. Evan had completely bought his father’s story of wanting to get married as soon as possible and he had thought Hank was simply raining on the parade. Which in turn made Hank think Evan was the wrong person to turn to. Evan after all had always believed in their dad and that goes especially for times when he shouldn’t have so Hank had later talked to Divya about his concerns.

Hank had told Divya that the rushed marriage had made him question if his father had changed. So he might have mentioned that he never would have believed that Eddie could have gotten his life together and well that put Divya in the position of having to point a few things out. Divya asked Hank if he was upset because he thinks his father was up to something or was he upset that Eddie managed to get further along with his life than Hank could do with his own?

And Hank hadn’t known the answer to that. He has had to sit by while Evan and Paige got married and while Divya started a family with Raj so he had to consider the idea of what if he was jealous of his dad. Though, just in case, Hank had later gone to a lunch that Evan and Paige had quickly put together for Eddie and Newberg and he had asked the happy couple how they came to decide that they were going to get married so soon. And the answer had been cryptic at best.

Newberg had gushed when she said that Eddie simply proposed to her out of the blue and that he said he had to marry her now yet that emphasis on “now” did leave room for questioning. So Hank began to feel like maybe he was onto something for second guessing Eddie. Although he pushed his suspicions to the side when he went to go visit his latest patient. Hank and HankMed were treating a new VIP by the name of Diana Underhill. And Diana wanted the fact that she’s seeing a doctor to remain a secret.

Diana was running against Paige’s father in the upcoming elections for Senate so Diana didn’t want her future constituents to think she was sick. She said that it was bad enough running as a woman because not a lot of people wanted to take her seriously, but apparently being sick would have been certain death to her political aspirations. So, at first, Hank had tried to keep everything on the hush hush only that changed after Diana skipped out on her biopsy.

However, Hank had ordered that biopsy for a reason. He had noticed that something was off with Diana’s condition and he wanted to get to the bottom of it before she tried to pretend nothing was wrong. And yet she skipped a step. So the next thing that Hank heard was that she was having trouble breathing and he ended up running late to his father’s wedding because he had to put Diana in the back of an ambulance.

Only Hank eventually found out that it didn’t even matter that he was late to the wedding because there wasn’t going to be a wedding.

Hank and Eddie had talked things out so Hank was finally ready to trust his dad when he said that it was just his nerves about getting remarried that had made him feel off. But then Eddie had ruined that trust by ditching his bride at the altar. As in he hadn’t showed up, he just sent a text to everyone concerned. So Eddie had left a devastated Newberg though fortunately Paige was able to convince Newberg that she should at least enjoy the reception.

It wasn’t an amazing reception, but it was interesting. Divya and Jeremiah finally got a chance to talk about his “issues” and she had assured him that he was still a good doctor. Even if he had missed a patient’s symptoms because he desperately wanted to get out of the house. So in reality Jeremiah was still finding his footing again. Although he was getting better.

And he should probably start by being able to pick himself up on his own. Divya is a good friend however she wanted to go to med school and she was having another baby. So Jeremiah really was going to have to find a new if not temporary shoulder.

But Hank had come to accept what his father so he thought it was time to ask Jen out and was actually getting excited about it once she said “yes”. So naturally something just had to happen to ruin it all. And in this case, it was finding out that someone had hacked HankMed.