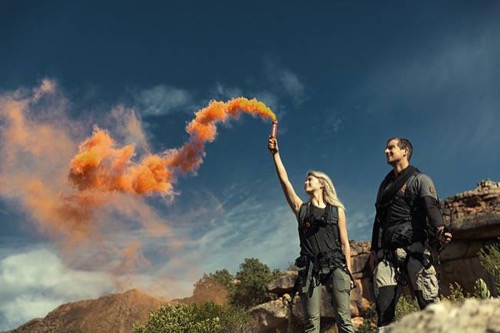 Tonight on NBC their new show RUNNING WITH BEAR GRYLLS airs with an all new Tuesday, August 2, season 3 episode 2 called, “Julianne Hough” and we’ve got your Running wild with Bear Grylls recap down below. On tonight’s episode in Julianne Hough joins Bear on a trek in Africa, where they encounter a pack of elephants blocking their path.

On the last episode, in the third-season opener, Nick Jonas joins Bear for a snowy mountain adventure in the Sierra Nevada during blizzard conditions. Did you watch the last episode? We’ve got a detailed Running Wild with Bear Grylls recap right here.

On tonight’s episode per the NBC synopsis “in the third-season opener, Nick Jonas joins Bear for a snowy mountain adventure in the Sierra Nevada during blizzard conditions. The guys rappel down a sheer cliff, eat a frozen bird and swim across a freezing lake.”

Will Running with Bear Grylls be another huge hit for NBC? Tune in tonight at 8PM EST and let us know what you think about this cool show. Don’t forget to tune into our Bear Grylls recap tonight at 10:00pm.

On tonight’s episode of “Running Wild with Bear Grylls” the host teams up with dancer Julianne Hough to explore South Africa where the two will face unpredictable terrain and dangerous wildlife.

The two start their journey by setting off on a quad bike into the bush, giving them a close-up view of elephants, giraffes, and other wild animals. The two approach a pair of elephants on foot and Bear grabs a large pile of elephant dung to demonstrate how the fluid inside can keep you hydrated in an emergency scenario. He has Julianne squeeze the fluid out of the dung into a canteen for later and then the two climb back onto the quad bike and head for more mountainous terrain.

Bear guides Julianne to the top of a mountain that is the last barrier before a massive canyon on the other side that the two will need to cross. Borrowing a can of deodorant from Julianne, he uses it as an anchor for the two to rappel down the mountainside. Now in the canyon, the two mountaineers take a break and discuss Julianne’s childhood and her beginnings as a dancer.

As the duo again set off again, they spot a pair of cheetahs and are forced to crawl across the ground, hiding from the predatory cats. Once safe from the cheetahs, the duck inside a rock enclosure their way is barred by a giant snake. After sneaking past it, Bear goes back and captures the snake in order to kill it for dinner, but Julianne refuses to eat it. Bear negotiates with her that if she touches the snake, he will let it go but she has to agree to eat whatever they find next. Julianne agrees and Bear releases the snake. As the sun starts going down, Bear begins searching for shelter for the night. He finds a small cave near a water source and the two then turn their attention to starting a fire.

Julianne works on the fire while Bear searches for a dinner to replace the snake that he was forced to let go. He finds some policemen caterpillars and cooks them in the elephant dung that they collected earlier. As their dinner cooks, Julianne discusses the time she spent in London as a child working on her dancing and her parent’s divorce. The two dig into their concoction, with Julianne gagging as she forces it down.

Snuggled into their cave for the night, Julianne repeatedly wakes up afraid she hears approaching leopards. Having survived the night, Bears and Julianne continue their journey. As the two are crossing a waterfall, their way is blocked by a large boulder that forces them to squeeze through the impossibly tight space. Continuing on through the gorge, the two pause to appreciate some cave drawings and discuss Julianne’s plans to have children with her fiancée. Leaving the drawings, Bear and Julianne keep going through the gorge towards the end of their journey.