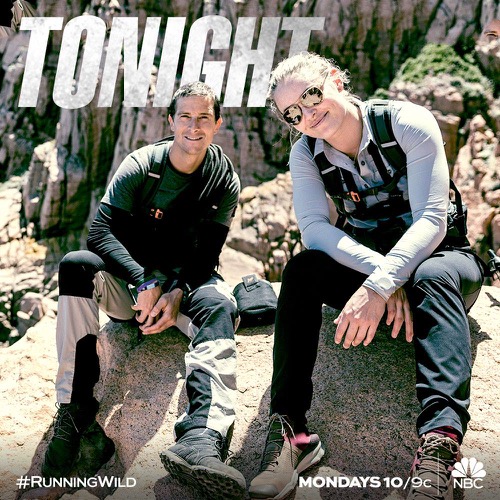 Did you miss last week’s episode where Shaquille O’Neal joined Bear in the Adirondack Mountains and ate placenta?  If you missed the episode we have a full and detailed recap, right here for you!

On tonight’s episode as per the NBC synopsis, “Olympic Gold-Medalist Lindsey Vonn joins Bear on a harrowing journey along the Corsica Coastline. After roaring across crystal-clear waters in a speedboat, Bear and Lindsey must strip down and swim to shore before inching their way along the rugged coastline.”

On tonight’s episode of “Running Wild with Bear Grylls,” the survivalist is joined by Olympic gold medalist Lindsey Vonn in Corsica.

The adventure begins with the skier and Bear taking a speedboat trip to the Corsican sea cliffs. The two put in anchor offshore and swim to the cliffs. Lindsey immediately refuses any help from Bear as the two struggle to climb up onto the cliffs. As the two climb up the cliffs, Lindsey and Bear discuss her childhood and competitive nature. After making it through a narrow causeway, the two are faced with a steep drop-off that they must climb down. Bear begins guiding her down the cliff face and the two continue to clash as Lindsey refuses any help. At the bottom of the cliffs, Bear and Lindsey discuss her early skiing career.

Bear ropes himself and Lindsey together before they start walking across the cliffs. After a short distance, they reach an impasse and are forced to re-evaluate their route. As a solution to crossing the gorge, Bear has Lindsey tie the lead rope to the end of a spear in the spear gun and shoot it across the chasm. After her shot fails, Bear reloads and lands the spear around a rock at the other end of the gorge. Bear and Lindsey attach their belts to the line and pull their way across to the other side of the gorge.

For dinner, Bear and Lindsey dive into the sea to gather winkles, snails and sea urchins from the sea floor, before competing to see who can hold their breath the longest. The two find a cave to use as shelter for the night and start a fire. As they begin to prepare the sea urchins, Lindsey has second thoughts about Bear’s choice for dinner. While the sea urchins boil, Lindsey tells Bear about all her injuries in her skiing career and her past romance with Tiger Woods. The two then dig into the sea urchins, which Bear describes as having the taste of “bogeys.” Bear and Lindsey then hunker down for the night in the cave.

After a quick knot-tying lesson the next morning, Bear and Grylls set off rock climbing across the cliffs. The two discuss marriage and kids as they take a break. Bear then uses Lindsey as an anchor as he goes around an overhanging rock hanging over the precipice. After successfully making it across, Lindsey then takes her turn. From the top of the cliffs, Bear and Lindsey are picked up by a helicopter that takes them out of Corsica.

After two days of sea cliff rock climbing and eating sea urchins, Lindsey Vonn has proven that she is ready for the next phase in her competitive career as she and Bear Grylls score a gold medal in Corsica survival.