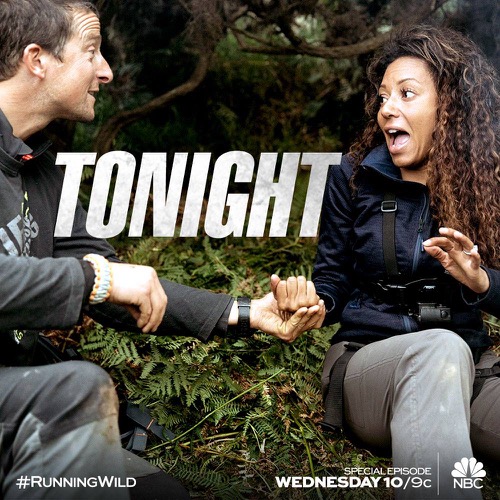 Did you miss last week’s episode where Lindsey Vonn joined Bear on the French island of Corsica, where they rappel down a rock wall?  If you missed the episode we have a full and detailed recap, right here for you!

On tonight’s episode as per the NBC synopsis, “SPICE GIRL MEL B JOINS BEAR ON A CHART-TOPPING ADVENTURE TO THE WELSH COASTLINE — Adrift on the open sea in a small rowboat, Mel B is rescued by Bear in a way you’ll have to see to believe. Once ashore, the two must navigate two hundred foot cliffs, impenetrable terrain, and a final descent that sends Mel into full breakdown mode.

On tonight’s episode of “Running Wild with Bear Grylls” the survivalist is joined by Spice Girl and “America’s Got Talent” judge Mel B. In this episode, the two explore the cliffs of the Welsh coastline.

The adventure begins with Mel B paddling out to buoy to meet Bear. The two use Diver Propulsion Vehicles to swim through shark-infested waters to reach the cliffs. Once ashore, the two climb up the cliffs. After a short walk, Bear and Mel B are confronted with a steep drop-off that they are forced to go down. Bear was able to lower Mel B down once she overcame her paralyzing fear of the sheer drop. At the bottom, Bear and Mel B discuss her three daughters and their three fathers, as well as her background.

The two begin looking for dinner by the water. Bear finds a jellyfish by the water and when handling it, is stung on his hand. To help the sting, Mel B urinates on Bear’s hand. Bear then cuts up the body of the jellyfish and takes it with them as they continue to walk along the rocky shore.

[Bear and Mel B are then faced with a past mudslide that they must walk up in order to continue their journey. Using a sharp stick in each hand to gain traction, they each make it up the mudslide. After the mudslide Bear and Mel B bushwhack their way through some ferns until they find an appropriate spot to camp for the night under a bush. Mel B secretly uses a propane firestarter as Bear chops ferns for cover. As the two wait for the jellyfish to cook, they discuss Mel B’s childhood and fame with the Spice Girls and “America’s Got Talent.” Bear then unsuccessfully tries to impress Mel B. with a disappearing coin trick in hopes of being on “America’s Got Talent.” The two then dig in to the jellyfish before settling in for the night.

In the morning, they set off again to find a way down to sea level to reach their extraction point. Bear finds a hole in the rock, and has Mel B lower him down through the hole and into the water below. On Mel’s descent, she struggles to keep her cool as she makes her way through the hole. Once in the water, they swim out to where a helicopter has dropped a Sea-doo and make their way out of the sea cliffs.

In tonight’s episode, after conquering her fear of heights, Mel B was able to hold her own next to Bear Grylls as the two traversed the Welsh sea cliffs, ate jellyfish and bushwhacked through miles of ferns.THE END