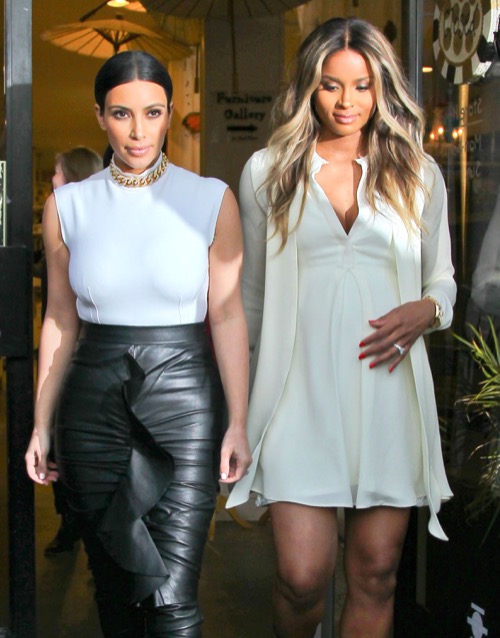 Is Russell Wilson pushing Ciara to cut ties with her old pal Kim Kardashian? Ciara and Russell Wilson’s marriage has so far proven that the singer is willing to make a lot of changes in her life in order to accommodate her NFL star husband. And while Ciara’s lifestyle has definitely changed as she managed to stick to a celibacy vow for a full year before marrying devout Christian Russell Wilson, is he making her dump some of her friends including the Kardashians, too?

Ciara and Russell Wilson’s courtship began back in April of 2015 when they debuted as a couple at a White House dinner with President Barack Obama and First Lady Michelle Obama. Fans noticed right away that something was different about Ciara as she seemed to gravitate toward Russell Wilson and his God-worshipping and Christian lifestyle which was a far cry from what she was used to with her ex-fiance Future and most of her friends, including Kim Kardashian and her family.

In fact, it seems like Ciara was willing to not only adapt to Russell Wilson’s religious ways, but to cut ties with her friends who she was once very close with. Kim Kardashian and Kris Jenner were only a few of the reality television stars who attended Ciara’s baby shower when she was still engaged to Future and expecting her son in early 2014.

Since meeting Russell Wilson, it seems as though he might have suggested to the ‘Goodies’ singer to ditch the ‘low-life’ Kardashians as they simply don’t fit with the couple’s new image or share the same morals for that matter.

After all, Kim Kardashian’s sex tape is her claim to fame in the celebrity world. Why would Russell Wilson want his future wife hanging out with someone who leaked her own sex tape for publicity while the Seattle Superhawks star insisted that they abstain from sex for a whole year until they got married.

And it seems like Ciara might have taken Russell Wilson’s advice as she has not been photographed with her old pal Kim Kardashian or Kris Jenner for a full year now, nor has she invited any of the Kardashians to her wedding in England earlier this summer.

If Ciara is willing to delete contacts from her phone and cut ties with people who she once trusted as close friends for her husband Russell Wilson, what else is she willing to do? Fans are worried that changes in Ciara’s career might be next, especially is Russell Wilson has anything to say about it.

Tell us CDL readers, what do you think? Is Russell Wilson the reason why Ciara and Kim Kardashian are no longer friends? Let us know in our comments section.