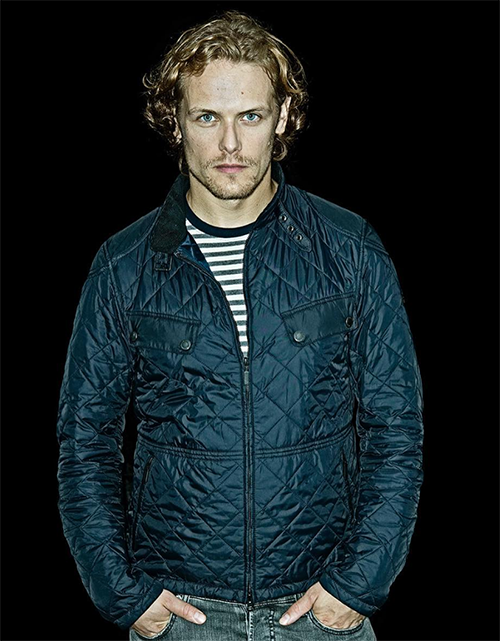 Sam Heughan is opening up about some of the things he loves and, of course, doesn’t like too much about his role in the massively popular Starz series ‘Outlander.’ The actor, who plays Jamie Fraser on the show, reveals just how much pity he feels for his female co-stars on the show simply because they have the daunting task of putting on their NSFW swan nipple dresses.

The period drama’s elaborate wardrobe, which includes the famed swan nipple dress, is such a daunting task that actresses like Caitriona Balfe, who plays Claire on the show, struggle with the pieces almost everyday, according to Sam.

“As beautiful as [the swan nipple dress] looks, I have no desire to [wear it],” Heughan told People Magazine in a recent interview. “The women on the show have all of the corsets, the underwear and the underdressing they have to wear. It is really is a lot of material to be worn. So I feel very fortunate to be wearing kilts. They’re very easy to put on — and very easy to take off.”

Surely, there are plenty of fans who would agree with Sam’s statement, as he’s fast become one of the hottest actors on the small screen and if not the sexiest one to wear a kilt on television. The Scottish-born actor also says there’s plenty to look forward to in the upcoming season.

“In this season, we span over 20 years — we go to Scotland, Jamaica and England and also end up in North Carolina, so it’s a real adventure. I was like, ‘Oh my God. What are you doing?’ So there’s going to be some surprises and really dramatic, epic scenes.”

But as far as those reports regarding Sam Heughan and Caitriona Balfe taking taken their romance off-screen, the actor has kept mum. They’re leaving fans guessing – and still waiting for answers – as to what is really going on between them.

Right now, Starz hasn’t released a premiere date for season 3, although it is believed to be sometime in early 2017. Are you looking forward to seeing Sam Heughan, Caitriona Balfe, and the rest of the cast on the small screen again? Let us know!

Also, don’t forget to check back in with CDL for all the latest news and updates on Sam Heughan and all of your favorite Hollywood stars right here.

Today marks the beginning of Childhood Cancer Awareness month. I’ve just returned from a trip to Ghana where I saw first hand the incredible work the teams there do under very tough circumstances. Join me in donating to @wchildcancer to see how you can help. #childhoodcancerawareness #worldchildcancer #ghana Click link in bio to donate.

#childhoodcancerawarenessmonth Show your support with @caitrionabalfe and @wchildcancer and donate on the website to aid support and treatment.